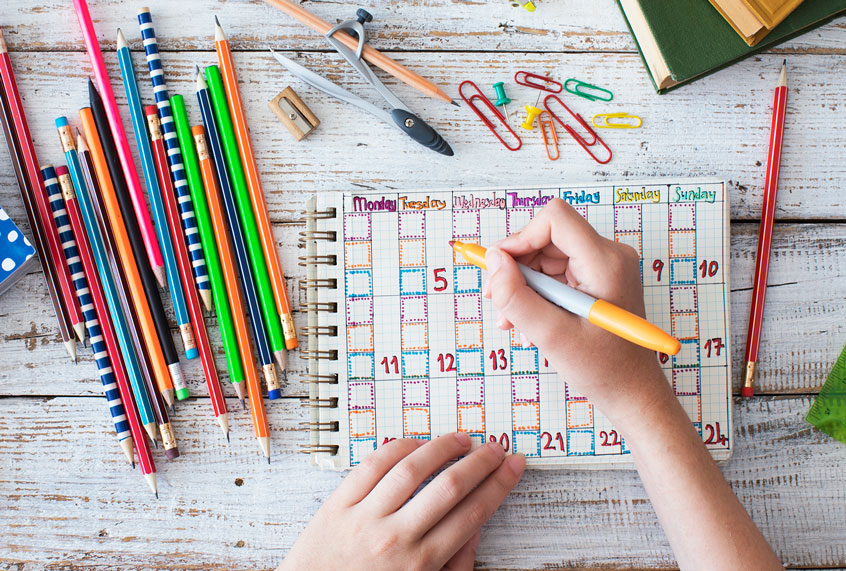 Those of us born in the 1990s or earlier likely have fond memories of our paper planners from our grade school days. Though ostensibly designed for keeping track of homework assignments and due dates, I used mine to count down the days to field trips and school dances, to write myself short notes in the moment, and to scribble the initials of my crushes. Indeed, picking out my yearly planner was the highlight of my back-to-school shopping ritual. Initially, the blank pages were exciting — they implied a big adventure ahead. Yet by the end of the year, those pristine pages looked like they had been scorched in a fire: edges torn up and ripped apart from getting caught on backpack zippers; tasks written over with notes by friends. Still, that degradation told a story of a year of life, one that I could look back on and remember.

By the time I got to college, Outlook and Googles’ e-calendars supplanted my paper planner habit. Like most elder Millennials, my life transitioned from analog to digital right as adulthood set in. And though it’s been over a decade since I made the jump to full-digital planning, I am not convinced my organizational means are superior. So last month, I made the transition —  back to paper.

I’m not the only one of my generation to go paper. In fact, I’m late to the trend. On Instagram, #planneraddict has nearly 4.8 million mentions. Sales of paper planners increased 10 percent between 2015 and 2016, when the market hit $342.7 million in sales.

What accounts for this shift? I have my own personal experience I can speak to, but I can only speculate as to why others have gone paper. There are benefits to the physicality of paper, but it also seems to be an exercise in simplicity and nostalgia. Paper planners don’t constantly interrupt us with notifications; they don’t demand our attention; they don’t want anything from us, and they don’t ask us to charge them every evening.

My paper experiment seems to have worked well in my own life. Since I’ve transitioned to paper, I haven’t double-booked a night out. I schedule in exercise, writing, and walking the dog. I rarely miss an appointment, as my calendar has its own dedicated physical space, rather than occupy an ephemeral smartphone screen for a few seconds. It would appear, then, that my childhood methods of planning were superior to Google Calendar.

Researchers of consumer culture have argued that the rise in popularity of analog devices and physical media — for example, vinyl’s paradoxical comeback— extends beyond nostalgia. Instead, researchers say consumers are attracted to analog’s perceived sense of coolness; likewise, the resurgence of physical formats relates to younger generations’ curiosity for a pre-digital era. Moreover, nostalgia is a powerful emotion and it can be used as a coping mechanism for anxiety and transitions, both of which apply to this moment in time.

Amy Baker, a mediator based in Seattle, said she tried for years to use iCal and Google Calendar, but it was always a “bust.”

“Either I entered the wrong date, or my iPhone just freaked out and changed the date,” Baker told Salon. “I can build a website and write killer academic papers accessing libraries around the world, so I don’t just think it’s a technophobe problem when I say that switching back to a paper planner has made my life so much better and easier.”

For Baker, there is something about writing an appointment down that drills it into her memory more than when she types it; also, Baker used to be a typographer and maker of high-end paper. Her daily planner evokes nostalgia for a prelapsarian age.

“There is something slower and more precise about it for me,” she said. “There is intention that is lacking in the impersonal, ‘Oh, let me grab my phone and put you in there like any other commodity that I carry around in this piece of technology.’”

“There’s something so satisfying about crossing something off your list with a pen,”Butler said. “I also find it’s easier to map out my day on paper as I’m a visual learner.”

Then there’s the nostalgia component, too.

“There is definitely a nostalgia connection with writing on paper,” she said. “Sometimes, I even get a little ‘crazy’ and use stickers to ‘check-off’ my completed tasks.”

As for me, I haven’t used stickers or glitter gel pens in my planner yet, but I’m definitely not opposed.

“Get off your phone”: Trump scrolls through cell while small business owner describes hardships

“Why can’t you be normal?”: How the neurodivergent are mocked for being different