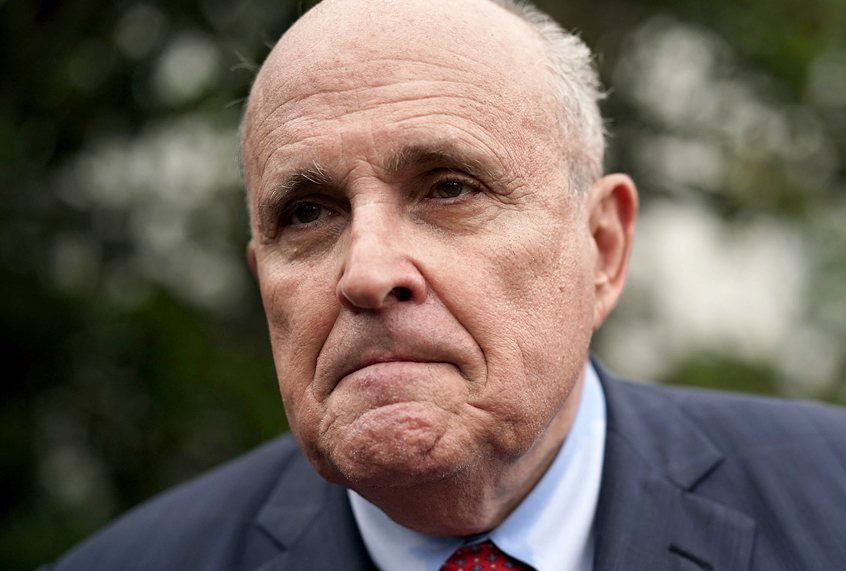 Trump attorney Rudy Giuliani lashed out at Republican impeachment counsel Steve Castor over his questions to European Union Ambassador Gordon Sondland as Republican lawmakers signaled that they may point the finger at the former New York City mayor to help President Donald Trump.

Sondland testified Wednesday that he and other administration officials were unhappy that Trump directed them to work with Giuliani to pressure Ukraine into investigating former Vice President Joe Biden and his son Hunter, and said Giuliani pushed for what Sondland described as a “quid pro quo.”

Tweeting on Wednesday, Giuliani insisted that Sondland’s testimony under oath was speculative, and declared “no quid pro quo!”

He also took issue with a question posed by Castor, who asked Sondland during the hearing if he knew “that Rudy Giuliani has private business interests in Ukraine.”

“Republican lawyer doesn’t do his own research and preparation, and is instead picking up Democrat lies, shame,” Giuliani tweeted. “Allow me to inform him: I have NO financial interests in Ukraine, NONE! I would appreciate his apology.”

Castor appeared to be referring to reports that federal prosecutors in New York are investigating whether Giuliani stood to personally profit from a Ukrainian energy firm pushed by associates Lev Parnas and Igor Fruman. Parnas and Fruman, who were later indicted on charges that they illegally funneled foreign money into U.S. elections, also helped Giuliani search for incriminating information on former Vice President Joe Biden in Ukraine.

Castor mentioned that Giuliani was involved with “Messrs. Parnas and Fruman” in their business ventures. He also noted that former special envoy to Ukraine Kurt Volker testified the previous day that Giuliani “was doing his own communications,” suggesting that he was trying to distance President Trump from his attorney.

This line of questioning is notable because it signals that the Republican strategy may shift to one of “blame Rudy” following Sondland’s damning testimony.

Rep. Doug Lamborn, R-Colo., told reporters outside of the hearing room that he has “some questions about what Mr. Giuliani was doing.”

Lamborn suggested that if Giuliani was “off on his own mission doing things that people didn’t know about, kind of like a loose cannon, then that’s a Rudy Giuliani thing, that’s not a President Trump thing.”

Top House Republicans told Axios before the hearings began that “Rudy will be cut loose because he was rogue.”

Republican sources similarly told The Washington Post that Giuliani’s “business interests in Ukraine” may show that he was “motivated by personal gain” and not “loyalty to Trump.”

These claims are contradicted by the public evidence that Giuliani was acting at the behest of the president, who remains his client.

Giuliani bragged to The New York Times back in May that he was planning to go to Ukraine to push for investigations that could help Trump. Trump appears to have personally pushed for Ukrainian President Volodymyr Zelensky to investigate the Bidens. He also called Sondland a day after the July 25 call with Zelensky to press him on the status of “the investigations,” U.S. diplomat David Holmes testified to the House Intelligence Committee on Thursday.

Rep. Sean Maloney, D-N.Y., pressed Sondland during his Wednesday testimony on who stood to benefit from the “quid pro quo” with Ukraine.

It would be difficult to distance the president from his own attorney, especially given Sondland’s testimony implicating numerous top administration officials.

Trump has tried this move before only to see it backfire. He infamously distanced himself from his longtime lawyer Michael Cohen, prompting Cohen to flip and cooperate with multiple investigations into the president.

“Rudy Giuliani isn’t going to jail for Trump,” predicted New York Times columnist Wajahat Ali. “He will also throw everyone under the bus.”

Ebola Outbreak in the Democratic Republic of the Congo Ends