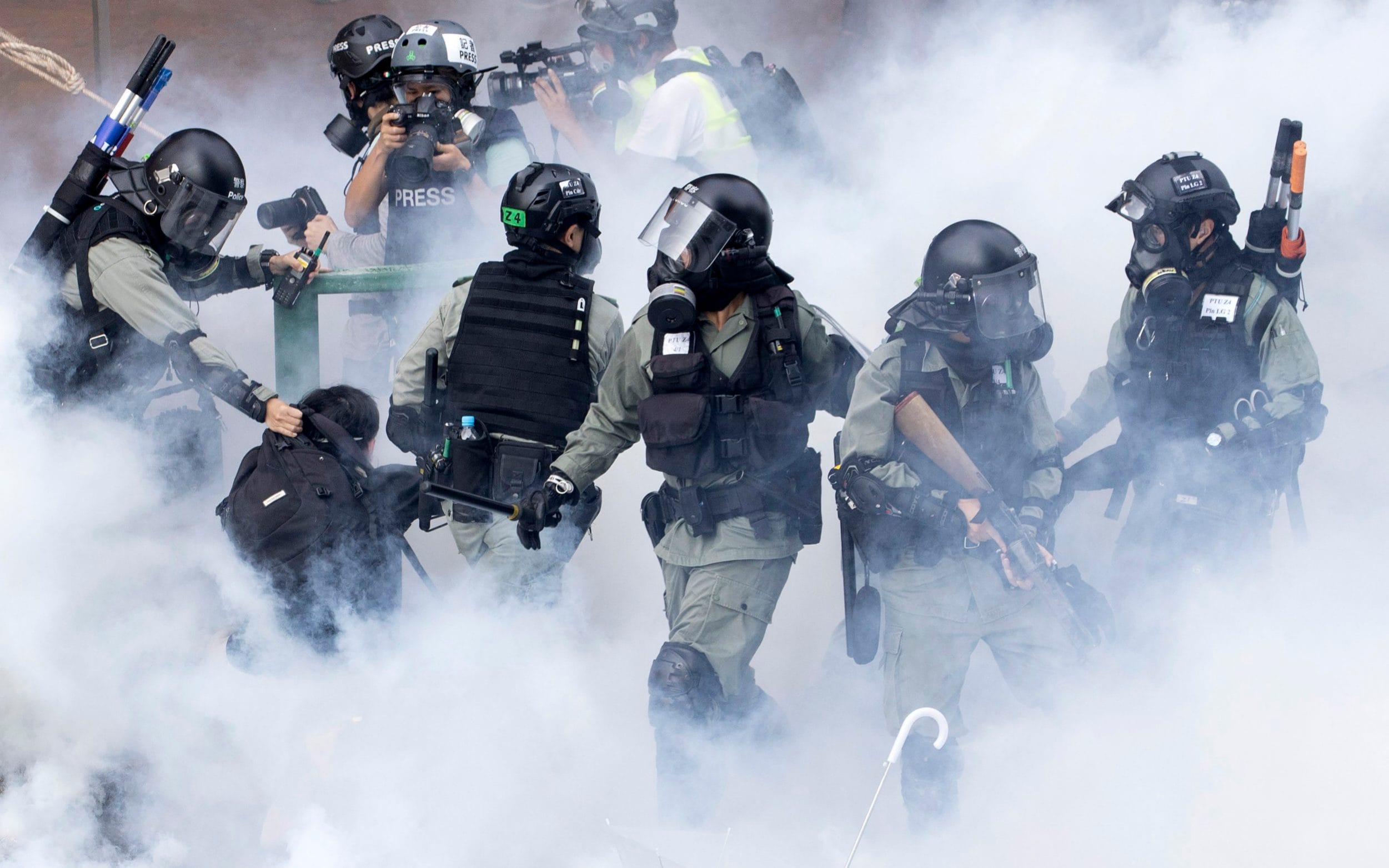 A two-day university siege has transfixed Hong Kong, raising fears of a bloody crackdown on hundreds of protesters who remain trapped in a campus surrounded by police.

Running battles between police and protesters on Monday featured raging fires, tear gas and flaming vehicles. Some demonstrators managed to escape Hong Kong Polytechnic University in Kowloon by climbing over walls, while police arrested dozens of others — sometimes tackling them to the ground or pounding them with batons.

On Monday evening, the government warned those inside to surrender peacefully and urged others to stay away from the site as protesters pleaded for reinforcements to battle police. Medical personnel were allowed in to tend to the wounded, while university officials called for a negotiation and parents held signs saying “Save the Kids.”

The chaos again made Hong Kong look in television images more like a war zone than a financial hub. Although stocks finished the day higher after losing 5.6% last week, signs of disarray were evident: The government ordered schools to remain shut for a sixth day, a major tunnel linking Kowloon with Hong Kong Island remained closed and officials warned that they may need to scrap District Council elections scheduled for Sunday.

“If the police want to go in and smash the movement, this is their opportunity,” said David Zweig, director of Center on China’s Transnational Relations and professor emeritus at The Hong Kong University of Science and Technology. “On the other hand, it could also be an opportunity to tone things down and start a dialog with university officials that could lead to a broader discussion.”

“It can’t go on in this form forever,” Zweig said. “The world now sees Hong Kong as a mess.”

Police surrounded the university over the weekend after students fortified the campus with makeshift barricades and scattered debris in front of the nearby cross-harbor tunnel that connects the peninsula with Hong Kong Island. About 600 people are still trapped on the PolyU campus, the South China Morning Post reported, citing the president of the university’s student union.

Protesters fired arrows from behind the barricades, injuring one officer, and threw scores of petrol bombs at officers who tried to sweep in. They also set police vehicles ablaze as officers warned protesters that they would use live rounds. Police kept up pressure, surrounding the campus, blocking exits and making dozens of arrests.

“We have to take the risk,” said one 26-year-old protester surnamed Lee, who took part in battle. “We have no alternative.”

Some of the most prominent members of the protest movement warned that the siege could end with widespread bloodshed.

“Is the world going to witness bloody crackdown w/o stopping ruthless regime?” said Joshua Wong, who led the 2014 Occupy protests and has been one of the most visible demonstrators in what is now a leaderless movement.

Over the weekend, Chinese troops exited their barracks in the former colony to help clear roadblocks, raising fears among the opposition that Beijing might directly intervene. The Communist Party’s flagship People’s Daily newspaper said there was no room for compromise, and the editor-in-chief of the Global Times newspaper called for police to use live rounds if attacked.

Lam’s government also suffered a setback when Hong Kong’s High Court ruled that her government’s attempt to quell protests with a controversial ban on face masks — rolled out with colonial-era emergency powers — was unconstitutional.

Officials in her administration pleaded on Monday with protesters to leave, saying the bill that sparked the protests allowing extraditions to China had been completely withdrawn. Demonstrators are still demanding an independent inquiry into police abuses and the right to nominate and elect their own leaders, even if they stand up to Beijing.

“Realistically, we must put an end to violence,” said Matthew Cheung, Lam’s deputy. “Unless you’ve got a peaceful environment, law and order restored to law-abiding Hong Kong, you won’t have the environment, the ambiance to conduct dialogue.”

The chaotic beginning to the workweek on Monday followed a previous week of unprecedented violence, with five straight days of chaos beginning with the shooting of a protester last Monday.

The worsening violence prompted many major universities to cancel the entire semester and led to classes being canceled at Hong Kong’s pricey private schools. Countless major events — including a major music festival and a Goldman Sachs anniversary event — have been cancelled or postponed.

“Some Hong Kong people have really lost patience with the radical protesters,” said Emily Lau, a veteran politician and former chairperson of the opposition Democratic Party, on Bloomberg Television. “But there are others who are very sympathetic, who will take to the streets in black to continue to support them. So it is a city that is split asunder.”

Even with growing disenchantment about the increased violence, many white-collar professionals have flooded into the city’s financial district to voice support for the students.

“We don’t really care about politics,” said one 40-year-old woman surnamed Cheung, who wore a blazer and an Apple watch, at a lunch time protest on Friday as crowds chanted “Fight for freedom! Stand with Hong Kong!” “But right now, they just want to show the world, the Hong Kong government, that we do care — that we do want to fight for it, even though we’re not in the front lines, holding the umbrellas, fighting through tear gas.”

As the violence worsens between protesters and police, the government has insisted it won’t yield to any further political demands. At the same time, there’s a growing sense that protester tactics are beginning to lead to fiercer confrontations, particularly as they dig in to hold territory like the PolyU campus.

“This is a political problem requiring a political solution,” said Steve Vickers, a former head of the Royal Hong Kong Police Criminal Intelligence Bureau who is now chief executive officer of Steve Vickers and Associates, a political and corporate risk consultancy.

“But in the end,” he added, “when the violence gets to a point where people are throwing hundreds of petrol bombs, and bows and arrows are wounding people, there comes a point when you can’t let that go on.”

Tree clippings from ‘lost’ suffragette plantation unearthed from archive, as researchers are in a race against time to preserve them

When it comes to style, one thing that sets Toni Tones apart is her penchant for not following trends. Known