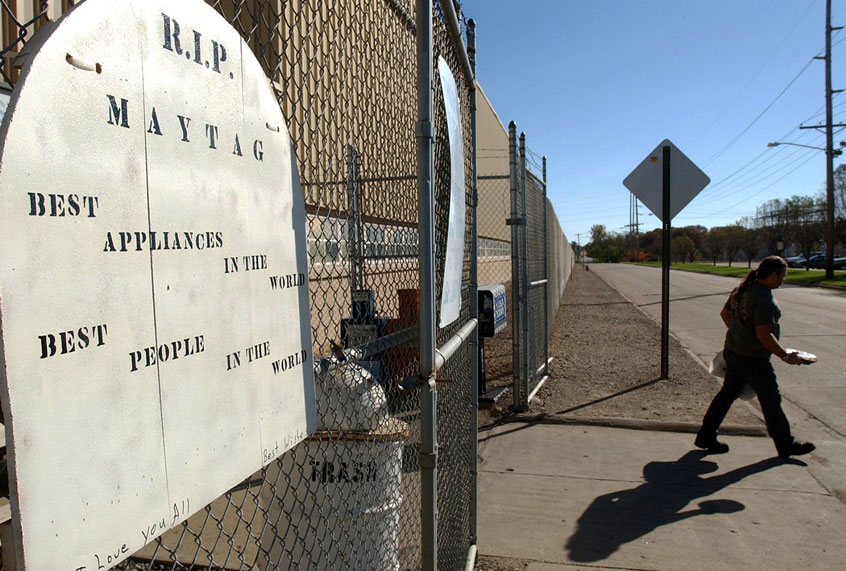 There has been no escape this week from the mainstream media’s wall-to-wall Trump impeachment drama. Yet while the media’s fixation on the Beltway crime wave makes for good television (and newsprint), there is scant attention being paid to the continuing slide of the economic circumstances of tens of millions of American families.

Democrats need to not only hold Trump accountable for his high crimes and misdemeanors but also for his abject failure to deliver for those voters that, as he correctly observed, were ignored for years by the nation’s professional political class.

Right now, the impeachment battle is playing out in the context of what is being reported as a “the longest economic expansion” in American history, the lowest unemployment rate in fifty years and a roaring stock market.

Assuming that Trump beats the rap in the U.S. Senate, he’s going to make the case that he was targeted by the deep state left-wing media cabal because he was finally delivering for regular Americans.

At that point, with no national on-the-ground reporting to contradict him, he can use the three years of glowing puffery on the economy driven by the Wall Street–centric business press to make his case.

He’s done a lot more with a lot less.

What’s at play here is the same disconnect between the bi-coastal media’s sanguine perception of the economy that had them assuming former Hillary Clinton would benefit from Americans’ satisfaction with President Obama’s recovery.

And after all, everybody in those neoliberal circles was doing great.

Yet, the morning after the election they were all wrong. As it turns out there was a whole other miserable America they lost track of, one that saw no recovery and actually has experienced a steady deterioration for decades and has continued that slide under Trump.

There’s no better example of this than the state of Iowa, which is set to have its Democratic Presidential caucus Feb. 3rd.

In 2008 and 2012 the state voted for President Obama in the presidential election, yet in 2016 it flipped for Trump — as did three of its four Congressional districts. In fact, of the 201 counties that flipped from Obama to Trump, 31 of them were in Iowa, the most of any state in the nation.

So, just how are things in Iowa after three years of Donald Trump?

With Thanksgiving not far off, 340,000 residents are grappling with how to cope with food insecurity, according to Dylan Lampe, with the Food Bank of Iowa. “For the last decade we have seen the same level of food insecurity across the state,” Lampe said during a phone interview. “A majority of our clients are working but the issue is the lack of wage growth. We haven’t raised the minimum wage in years.”

Iowa has been stuck at the federal $7.25 minimum wage for a decade. When local counties attempted to increase their local minimum, the state squelched it. When you factor in the increase in the cost of living over those years, you are talking about an implosion for working class families.

Several years ago, the United Way of Northern New Jersey started noticing that they were fielding calls from people suffering significant economic hardship in counties with a relatively low official poverty rate.

Close to a decade later, working with local partners, the United Way has identified this struggling population — one that has remained largely invisible in 19 states, including Iowa.

“It is because the cost of living is rising faster than wages,” Cook continued. “Iowans are hard-working people, but they are having to piece together multiple part-time jobs with no benefits. In the breadbasket of the world people assume we don’t have food insecurity issues, yet we do.”

The United Way reports that, in 2016, 12 percent of Iowa families lived in poverty, with another 25 percent in that ALICE cohort struggling week-to-week. That combined 37 percent cohort reflected an increase of 27 percent since 2010.

According to the United Way’s Iowa analysis:

[L]ow-wage jobs continued to dominate the employment landscape in Iowa, with 66 percent of all jobs paying less than $20 per hour. Although unemployment rates fell, wages remained low for many occupations. With more contract work and on-demand jobs, job instability also increased, making it difficult for ALICE workers to meet regular monthly expenses or to save.

Iowa is not an isolated case where voters sent the neoliberal elite a message they didn’t want to hear about the need for a radical realignment — one that might upend this crushing pyramid that seems to get heavier and heavier regardless of which team is in the White House.

Six of New York State’s Congressional districts — comprising more than half of the state’s land mass — gave up on the Democratic Party’s 2008 and 2012 “Hope and Change” and opted in 2016 to, as Michael Moore put it, toss a “human Molotov cocktail” by voting for Trump.

“Despite the rosy rhetoric about low unemployment and a booming stock market, it’s clear this economy is not working for everyone,” said Ron Deutsch, the executive director of the Fiscal Policy Institute. “Our state’s child poverty rate has remained at approximately 20 percent for far too long, with rates up to 50 percent in many up-state communities.”

“We have record levels of homeless in our state and millions more New Yorkers just trying to make ends meet,” he continued. “This rising tide may be lifting all yachts, but far too many are still clinging to life rafts.”

The United Way has a New York State report that supports Deutsch’s analysis.

“Despite an overall improvement in employment and gains in median household income….a large number of New Yorkers, 3.2 million households, or 45% of the overall population, cannot afford basic needs and lack sufficient income and resources to pay for housing, food, child care, transportation and health care,” the United Way reported.

2020 can’t be just about Trump, Russia and the Ukraine. It has to engage, empower and mobilize all of those ALICE households in a campaign that speaks to their economic reality.

In Mexico, an Underwater Dancer Performs in a Cenote

On April 18, the Electoral Commission was expected to have commenced the exercise towards the compilation of a new voters