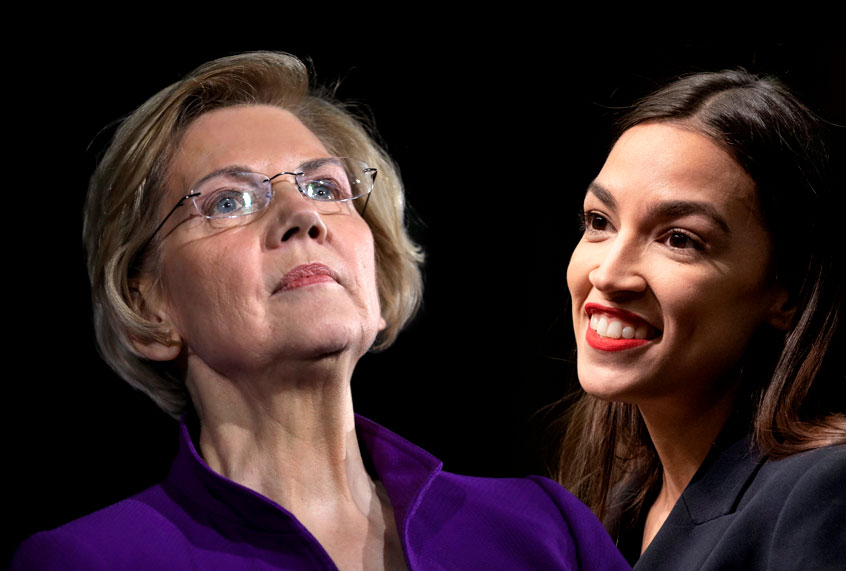 Two prominent Democrats — Sen. Elizabeth Warren of Massachusetts and Rep. Alexandria Ocasio-Cortez of New York — are supporting Taylor Swift in her battle against a pair of businessmen who she says are preventing her from performing her old songs.

“Unfortunately, @TaylorSwift13 is one of many whose work has been threatened by a private equity firm,” Warren tweeted on Saturday. “They’re gobbling up more and more of our economy, costing jobs and crushing entire industries. It’s time to rein in private equity firms—and I’ve got a plan for that.”

In addition to being a Massachusetts senator, Warren is also running for president in 2020.

In a second tweet Ocasio-Cortez wrote, “It doesn’t stop at music. For people w/ friends or family who worked in retail & suddenly laid off or hours deeply cut (Toys R’ Us, Sears, Sports Authority, etc) & sometimes stripped of severance, that goes back to PE as well. 1+ million jobs destroyed.”

The controversy over Swift’s music began on Thursday when the pop star tweeted an accusation against Big Machine Records CEO Scott Borchetta and Scooter Braun, who leads Ithaca Holdings LLC. In her tweet Swift claimed that the pair were preventing her from performing her own music. In June Ithaca Holdings LLC announced that it had acquired Big Machine Label Group, which owns her early songs, with the private equity firm The Carlyle Group supporting the transaction through an additional equity investment by way of its Carlyle Partners VI fund. Swift acknowledged The Carlyle Group’s influential role in this situation by saying that she was “especially asking for help from The Carlyle Group, who put up money for the sale of my music to these two men.”

After saying that she had planned on performing a medley of her songs from the past decade at an American Music Awards event honoring her as the Artist of the Decade, Swift said that Borchetta and Braun “have now said that I’m not allowed to perform my old songs on television because they claim that would be re-recording my music before I’m allowed to next year.” She also claimed that Borchetta and Braun were not allowing her to use her older music or performance footage for an upcoming Netflix documentary about her life over the past few years. Swift wrote that Borchetta told her team that she will only be allowed to use her music if she agrees to not re-record copycat versions of her songs and if she stops talking about him and Braun.

“The message being sent to me is very clear,” Swift said. “Basically, be a good little girl and shut up. Or you’ll be punished.”

In a statement Big Machine Label Group blamed Swift for the dispute, saying that “the truth is, Taylor has admitted to contractually owing millions of dollars and multiple assets to our company, which is responsible for 120 hardworking employees who helped build her career.” The company added later in the statement, “Taylor, the narrative you have created does not exist.”

7 vegetables that you should absolutely grill this summer