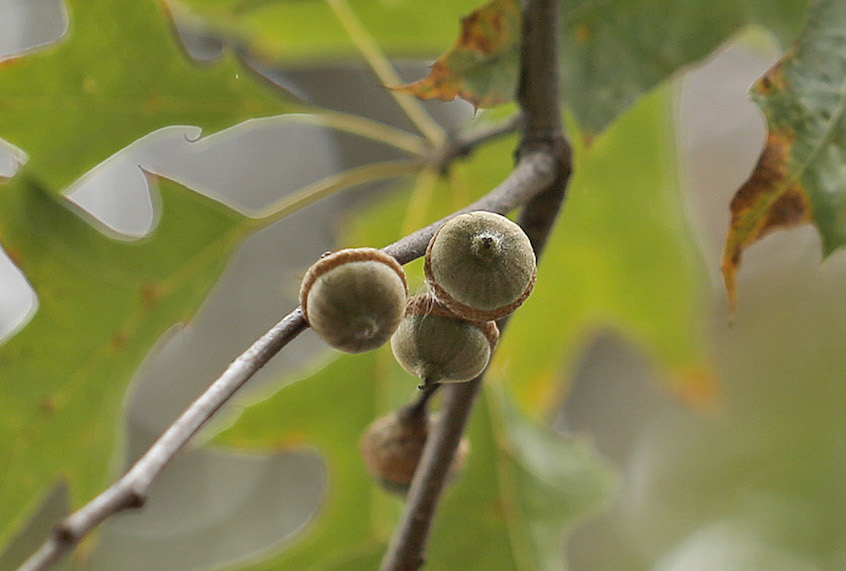 If you have oak trees in your neighborhood, perhaps you’ve noticed that some years the ground is carpeted with their acorns, and some years there are hardly any. Biologists call this pattern, in which all the oak trees for miles around make either lots of acorns or almost none, “masting.”

In New England, naturalists have declared this fall a mast year for oaks: All the trees are making tons of acorns all at the same time.

Many other types of trees, from familiar North American species such as pines and hickories to the massive dipterocarps of Southeast Asian rainforests, show similar synchronization in seed production. But why and how do trees do it?

Every seed contains a packet of energy-rich starch to feed the baby tree that lies dormant inside. This makes them a tasty prize for all sorts of animals, from beetles to squirrels to wild boar.

If trees coordinate their seed production, these seed-eating animals are likely to get full long before they eat all the seeds produced in a mast year, leaving the rest to sprout.

For trees like oaks that depend on having their seeds carried away from the parent tree and buried by animals like squirrels, a mast year has an extra benefit. When there are lots of nuts, squirrels bury more of them instead of eating them immediately, spreading oaks across the landscape.

It’s still something of a mystery how trees synchronize their seed production to get these benefits, but several elements seem to be important.

First, producing a big crop of seeds takes a lot of energy. Trees make their food through photosynthesis: using energy from the Sun to turn carbon dioxide into sugars and starch. There’s only so many resources to go around, though. Once trees make a big batch of seeds, they may need to switch back to making new leaves and wood for a while, or take a year or two to replenish stored starches, before another mast.

But how do individual trees decide when that mast year should be? Weather conditions appear to be important, especially spring weather. If there’s a cold snap that freezes the flowers of the tree — and yes, oaks do have flowers, they’re just extremely small — then the tree can’t produce many seeds the following fall.

A drought during the summer could also kill developing seeds. Trees will often shut the pores in their leaves to save water, which also reduces their ability to take in carbon dioxide for photosynthesis.

Because all the trees within a local area are experiencing essentially the same weather, these environmental cues can help coordinate their seed production, acting like a reset button they’ve all pushed at the same time.

A third intriguing possibility that researchers are still investigating is that trees are “talking” to each other via chemical signals. Scientists know that when a plant is damaged by insects, it often releases chemicals into the air that signal to its other branches and to neighboring plants that they should turn on their defenses. Similar signals could potentially help trees coordinate seed production.

Investigation of tree-to-tree communication is still in its infancy, however. For instance, ecologists recently found that chemicals released from the roots of the leafy vegetable mizuna can affect the flowering time of neighboring plants. While this sort of communication is unlikely to account for the rough synchronization of seed production over dozens or even hundreds of miles, it could be important for syncing up a local area.

Whatever the causes, masting has consequences that flow up and down the food chain.

For instance, rodent populations often boom in response to high seed production. This in turn results in more food for rodent-eating predators like hawks and foxes; lower nesting success for songbirds, if rodents eat their eggs; and potentially higher risk of transmission of diseases like hantavirus to people.

If the low seed year that follows causes the rodent population to collapse, the effects are reversed.

The seeds of masting trees have also historically been important for feeding human populations, either directly or as food for livestock. Acorns were a staple in the diet of Native Americans in California, with families carefully tending particular oaks and storing the nuts for winter. In Spain, the most prized form of ham still comes from pigs that roam through the oak forests, eating up to 20 pounds of acorns each day.

So the next time you take an autumn walk, check out the ground under your local oak tree — you might just see the evidence of this amazing process. 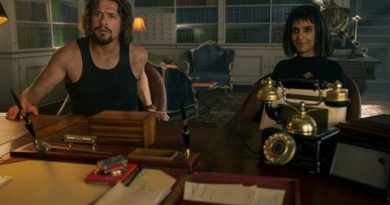 Ritu Arya Has Thoughts About Your Umbrella Academy Season 3 Theories 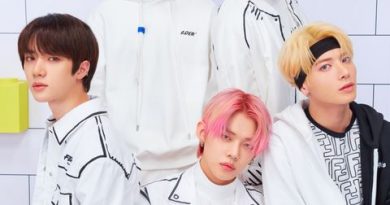 TOMORROW X TOGETHER on Their EP Minisode1: Blue Hour’s Meaning and What Their Teen Years Taught Them

Kakra Essien who was a one time junior pastor of Prophet Nigel Gaisie, the Founder of the Prophetic Hill Chapel

‘You’ve a problem with logic, English if you say ‘any idiot can go to court’ because you don’t understand it — Asiedu Nketia