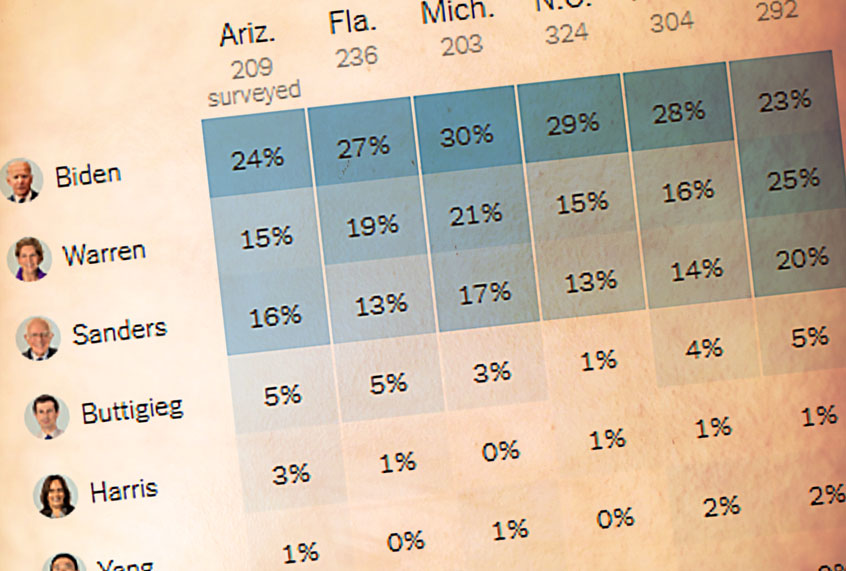 As the Democratic candidates intensify their argument over how best to defeat President Trump, their core voters in Michigan, Wisconsin, Pennsylvania, North Carolina, Arizona and Florida are counseling them to pursue a political middle ground. 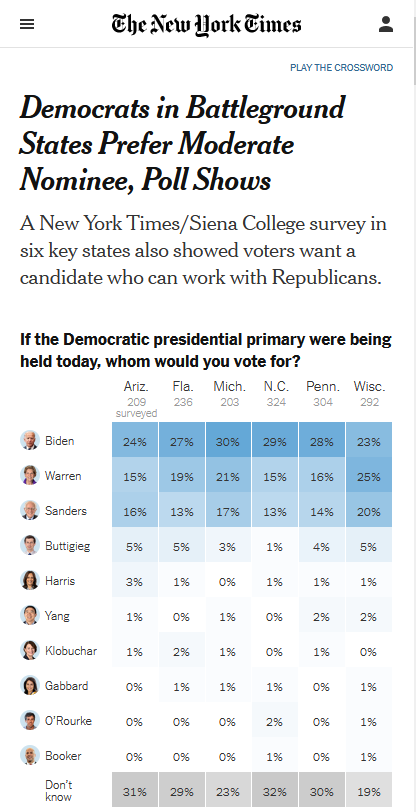 The New York Times (11/8/19) says that Democrats in battleground states want a “more moderate” nominee, even as many of them say they plan to vote for progressive candidates.

Curiously, though, the polling graphic the Times featured at the top of the piece showed a different story, in which the top progressive Dems combined (Bernie Sanders and Elizabeth Warren), compared to the major candidates branding themselves as “moderates” (Joe Biden and Pete Buttigieg), receive either greater support in those battleground states (Michigan, Wisconsin and Arizona), or the difference between the camps is within the margin of error (Pennsylvania, North Carolina and Florida). Many voters polled have yet to make up their minds, but those figures certainly ought to give any journalist pause before drawing the conclusion that those voters are “counseling” pursuit of the so-called middle ground.

The Times‘ analysis appears to be based on a different question asked in the poll — “Would you prefer a candidate who would be more moderate than most Democrats or more liberal than most Democrats?” — which saw a 55%–39% split in favor of the former.

The question also asks about what kind of candidate someone would prefer, rather than directly asking who they’d vote for. This could be especially problematic in an election where Democratic voters regularly tell pollsters they’re more concerned with a candidate’s “electability” than their ideology, and therefore might “prefer” a candidate they think others will vote for. Again, this will skew the answers.

But more importantly, who cares? As everyone knows, we pay extraordinary attention to these “battleground” states, not because they reflect the will of the country better than other states do, but because their votes matter more than the votes from other states due to our undemocratic electoral college system. So what battleground voters “counsel” candidates to do matters only in the sense that who they will vote for in the general election — not the primaries — matters.

And guess what? The Times poll did ask that question! And the paper published a lengthy front-page article about it earlier in the week (“One Year From Election, Trump Trails Biden but Leads Warren in Battlegrounds” — 11/4/19), in which the Times’ Nate Cohn highlighted comparatively low poll numbers for Warren, raising questions about her “ideology and gender” and largely excluding Sanders — who beats Biden in Michigan and trails him within the margin of error in the other states — from the analysis.

(Note that the Times poll is only one poll; other respected polls show all three leading Democratic candidates beating Trump in nearly every battleground state. See RealClearPolitics for poll roundups and averages.)

So the paper recycled its poll to tell essentially the same story about Democrats being too far left for the battleground states in a different and more roundabout way, presenting it as if it were new. (There’s no mention of the previous write-up in this article.) And we’re still a year out from the general election, and polls were notoriously fallible last time around. Welcome to media coverage of Election 2020. I Never Thought Arthritis Would Derail My Career. Here’s What I Wish I Had Known.

Democracy, not consumption is “how we will amass power to challenge the corporate behemoth”

Trump is the ultimate Karen