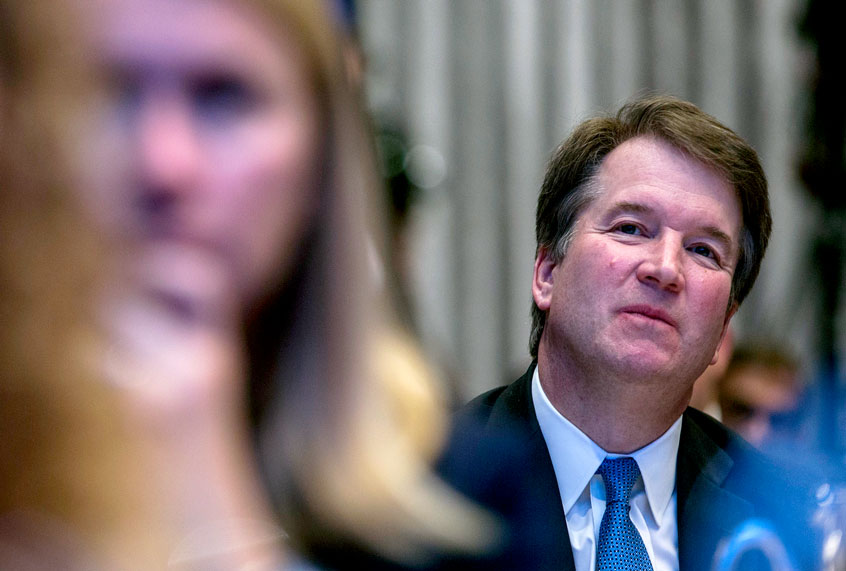 Supreme Court Justice Brett Kavanaugh was forced to face a giant screen featuring the testimony by Dr. Christine Blasey Ford, the woman who accused him of sexual misconduct during his confirmation hearings, upon arriving to his first high-profile speech since joining the bench last year.

The video was played on loop on a huge screen outside Washington’s Union Station while more than 3,000 members of the Federal Society were filing in to attend the conservative legal organization’s annual gala. This year’s event was dedicated to the late conservative Supreme Court Justice Antonin Scalia.

A long line of dinner guests, many in tuxedos and gowns, were met with cries of “Hey hey, ho ho! Kavanaugh has got to go!” and “I believe Dr. Ford! I believe Anita Hill!” Other attendees snaked by dozens of protesters dressed in red cloaks and white bonnets — the uniform of reproductive slavery in Margaret Atwood’s dystopian novel turned television show, “The Handmaid’s Tale.” A massive banner nearby read “Kavanaugh lied.”

Blasey Ford said she was “100 percent” certain that Kavanaugh had assaulted her in her testimony. She alleged that a drunken Kavanaugh pinned her down at a party in suburban Maryland in 1982 and attempted to remove her clothes, covering her mouth when she tried to scream — a moment in which she thought he might accidentally kill her.

The large screen playing Blasey Ford’s testimony was reportedly erected by Demand Justice, a progressive group that has called on Congress to impeach Kavanaugh.

“You can claim to respect survivors of sexual assault or you can pay for a celebration of Brett Kavanaugh, but you can’t do both. Any organization that doesn’t want to be complicit in normalizing Kavanaugh should withdraw its support from The Federalist Society and pledge not to give in the future,” Katie O’Connor, Senior Counsel for Demand Justice, said in a statement.

Several Democrats have called on Kavanaugh to be impeached after new allegations surfaced against him in September. Kavanaugh has denied all the claims against him.

“A private organization funded by anonymous donors having an improper role in the selection of judges and justices is bad enough,” Sen. Sheldon Whitehouse, D-R.I., said of Kavanaugh’s appearance at the gala. “A Supreme Court Justice returning favors to that organization is even worse.”

Facebook also faced criticism over its reported sponsorship of the event, renewing controversy over the company’s ties with far-right organizations just two weeks after its chief executive, Mark Zuckerberg, struggled to explain why it included Breitbart News, the self-proclaimed “platform for the alt-right,” in a list of “trusted” news sources. In addition, the social media giant, which is widely believed to have spread misinformation ahead of the 2016 election, recently said it would not vet political advertising for accuracy in the lead up to the 2020 elections.

Massachusetts Sen. Elizabeth Warren, a Democratic presidential candidate, has repeatedly taken taken aim at Facebook, including over its policy on political advertising. She most recently criticized the social network for sponsoring the event featuring Kavanaugh.

“Facebook is spending millions lobbying the government as they face antitrust scrutiny. They’re going on a charm offensive with Republican lawmakers. Now, they’re sponsoring a dinner headlined by Supreme Court Justice Brett Kavanaugh,” she tweeted Thursday. “Let’s call this what it is: Corruption.”

During the event, Kavanaugh reportedly said his theme for the evening was “gratitude.” In his speech, which lasted less than 30 minutes, he praised his colleagues and those who had stood by him over the past year and a half. The justice, who has largely remained out of the public eye since joining the bench, avoided references to his angry denial during his confirmation hearings that he sexually assaulted Blasey Ford when they were both teenagers. He was confirmed 50-48, largely along party lines, cementing the court’s conservative majority for years to come.

“I signed up for what I knew would be an ugly process,” Kavanaugh said, adding, “maybe not that ugly.” He admitted that his friends “paid a heavy price, too heavy a price” for supporting him.

“I’m well aware of that and it pains me daily,” he also said.

Best TV episodes of the decade, a highly subjective list