The SSS issued a statement on Wednesday claiming that those, who came forward to collect our clients – Omoyele Sowore and Olawale Bakare (defendants), are not qualified and that it will only release Sowore to his sureties after verification of the sureties. This is the height of impunity and lawlessness and this is how full-blown dictatorship evolves over time.

The SSS then ridiculously accused our lead counsel, the highly respected Femi Falana (SAN), of playing to the gallery simply because the learned silk called on the SSS to release the defendants from illegal custody without further delay and in line with the order of court.

It is crude and antiquated for the SSS to think that everyone will yield to its antic of crass intimidation and oppression.

The SSS is not an appellate court and as such cannot sit on appeal over the decision of the court by giving fresh conditions for the release of the defendants, who have since fulfilled their bail conditions as imposed by the court.

Even in the days of military dictatorship, court orders were obeyed, how much more in a democracy. It is time the SSS shed its pre-colonial mentality.

We are now in the jet age and those, who do not possess the capacity and democratic tolerance to flow with this age and time should not seek to occupy public offices – elective or appointive.

To say the least, the SSS has brought shame on us as a people in the comity of civilised nations.

This country belongs to all of us and not just a set of people who are privileged to be at the helm of affairs presently.

The order of court directing the SSS to release the defendants must be obeyed by the SSS irrespective of whoever maybe wearing a frown. That is how democracy and the rule of law thrive and Nigeria should not be an exception.

For the records, the worst form of corruption is disobedience of court orders by public officers and institutions.

It is, therefore, shameful, hypocritical and benumbing that a government that claims to be fighting corruption is now notorious for disobedience of court orders.

I want to believe that reasonable supporters of the ruling APC are seriously embarrassed by this executive intransigence and lawlessness. Unfortunately, this government under the leadership of General Muhammadu Buhari appears to be on autopilot and sadly so. 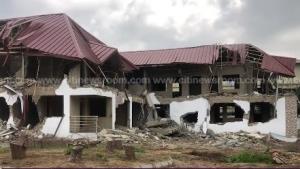