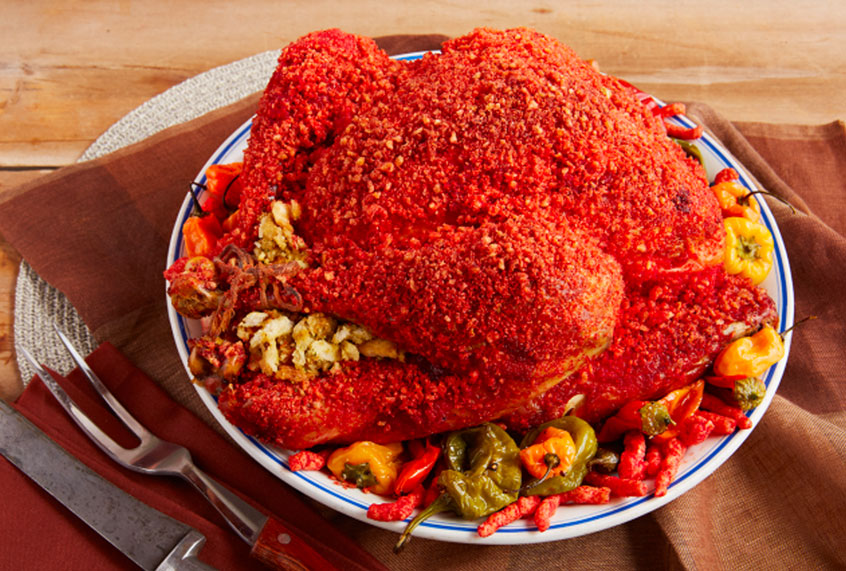 I never thought I’d have to simultaneously mute both the terms “cheese-stuffed turkey” and “hot cheetos  turkey” on Twitter, but here we are. A few weeks ago, a video started circulating on the platform in which a nameless, faceless set of hands thrust a block of what appears to be Velveeta cheese into the cavity of a raw turkey. This is after it’s been brined in hot sauce and stuffed with fingerling potatoes, but before it’s slathered in butter and Flamin’ Hot Cheetos dust.

The end result is an atrociously synthetically crimson bird sitting on a small puddle of oozing, melted cheese (though I’m unclear about what kind bacterial hell that whole dairy in raw poultry move hath wrought). I was with my boyfriend when I first watched the video, both disgusted and bemused. “Why do we do this?” I wondered out loud. Without a beat he responded: “Boredom.”

Turkey is definitely a meat that can lend itself to boredom; unless prepared correctly, you’ll be left with a tasteless pile of dry, bland bites. A sane person would use this as an opportunity to pick a side in the age-old brine-versus-rub debate, or maybe just brush their citrus-stuffed turkey in butter in the style of culinary goddess Ina Garten.

But the inventors of these turkey preparations below — the weirdest the internet has to offer — have decided that even if you can’t do something right, you might as well do it with style.

In researching bizarre bird preparations, I quickly realized that some of the most shocking were (perhaps unsurprisingly) a publicity stunt by brands looking to pick up a little holiday business. Enter: Reynolds Kitchens and their “flavor-blasted turkeys.” Prepared using the brand’s heavy-duty aluminum foil to tent the turkeys, Reynold’s test kitchen has released recipes for pumpkin-spice turkey, a Funyuns turkey and a turkey made with the powder in boxed macaroni and cheese.

And last year, they came out with an edible glitter turkey. The “glitter” is made with a combination of Gum-Tex powder and food coloring, which is then patted all over the breast and thighs — kind of a sparkly dry rub situation that ultimately looks like your turkey spent a late night in either a craft store or a strip club.

Turkey in a Bacon Jacket

Using just a pound and a half of thick-cut bacon and some kindergarten-level crafting skills, you too can weave a bacon jacket for your turkey. This is a slight update on the 2007 recipe from Serious Eats in which you simply wrap the turkey in bacon — which I actually tried a few years ago.

The flavor is actually great, but by covering the entire surface of the bird in bacon, the texture of the entire dish is compromised. After self-basting in bacon fat, the turkey skin — arguably the best part of the turkey — gets a little flabby.

I’m actually a big fan of a Coke-braised and -glazed meats, like this recipe from The Kitchn, made with Classic Coke, brown sugar, and butter. It adds a nice, subtle sweetness  akin to that of a sugar-glazed ham and helps crisp up the skin. What I’m not a fan of, however, is the infamous Holiday Pack from Jones Soda, complete with sodas flavored like cranberry, green bean casserole, mashed potatoes — and turkey and gravy.

It apparently wasn’t as noxious as you’d imagine. The MarySue did a taste test of the flavor in 2012: “It smells like a box of chalk. It tastes chalky as well, and I didn’t immediately have to spit it into the sink like I did with the Brussels sprout soda.”

From the minds behind of the aptly named Unwholesome Foods comes the TurDunkin’ “a turkey brined in Dunkin’ Donuts coolattas, stuffed with munchkins and served with coffee gravy and mashed hash browns.” The whole thing is topped with pastel-colored sprinkles and just looks . . . sticky.

Per one of the creators, tasting it sends you to a “hell for the gluttonous that would be beyond the imaginings of pedestrians like Dante.”

The Turducken is basically the OG of vaguely unsettling, though potentially delicious Thanksgiving creations. It’s made by stuffing a turkey with a duck that is stuffed with a chicken. While its exact origins are unknown — food writer John T. Edge has said that it strikes him as  “a dish invented by men in a hunt camp” — the late Cajun chef Paul Prudhomme trademarked the name in 1986.

In the subsequent decades, I think more people have grown to appreciate the technique required to properly execute this case of poultry-ception in a way that renders everything fully cooked but not dry. The Food Network even has a tutorial.

If that looks like too much, you can always try the new Pringles Turducken Friendsgiving pack, with which diners can stack chicken, duck and turkey chips for a satisfying bite. Good luck finding one though; while the original packs were priced at $16, they sold out almost immediately. Extras are now going for over $100 on eBay — I guess proving our hunger for something a little different from our Thanksgiving meals. 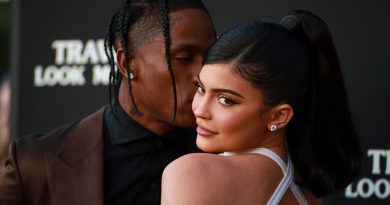 Inside Kylie Jenner and Travis Scott’s Rekindled Romance: ‘He Really Wanted Her Back’