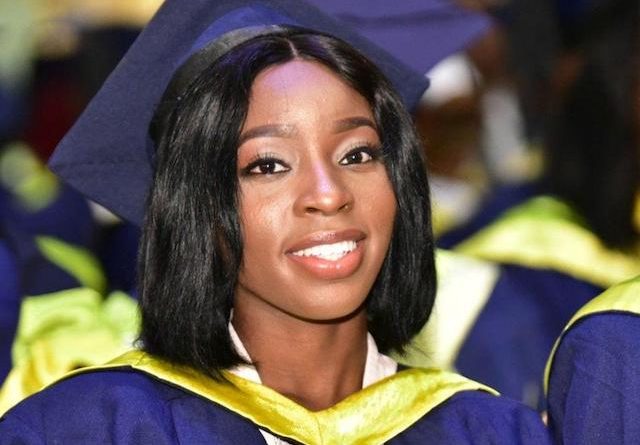 Miss Mary Ebhomielen Ofure of the Department of Computer Science, Faculty of Science headlined the 2019 University of Ibadan convocation ceremony today, as she was presented as the best graduating student.

She made first class with a perfect score, posting the highest Cumulative Grade Point Average, CGPA of 7.0.

Ebhomielen received a thunderous ovation when she was presented to parents and well-wishers at the ceremony.

On Facebook, she says she hails from Uromi, in Edo State and attended Louisville Girls School. She did not indicate whether it was the Louisville in Itele Ogun state or the Louisville Secondary School in Abuja.

Mary Ofure Ebhomielen , standing right in a family photo with her siblings and parents Emma and Helen

Mary Ebhomielen and her mum at her matriculation four years ago

For her peerless feat, she had a special handshake with the Vice Chancellor, Professor Abel Idowu Olayinka, who could not hide his admiration for the academic star.

Olayinka said: “Ofure Mary Ebhomielen is the fourth person ever to have obtained perfect Cummulative Grade Point Average (7.0 out of 7.0) in the 71-year history of the University of Ibadan. And the first female. This is worth celebrating and we are indeed very proud of her. The world is now under your feet, Mary. Aim for the skies while we keep celebrating you”

In her brief speech, intermittently interrupted by applause, Mary, who congratulated her fellow graduands, noted that they were being celebrated for burning the night candles.

She said success did not come easy, adding that apart from making a good grade in the university, one still needed to prove himself or herself in the outside world.

Ebhomielen called on those who did not make upper division to go out there and prove their worth.

Ebhomielen may be the one of the last first class graduate of the premier university to have a CPGA of 7.0.

This is because, the university several years ago, changed its grading system to align with the system in other Nigerian universities and in line with international best practices.

The university from the 2016/17 session changed to 4.0 CGPA scale. This will affect students admitted to the university during the session and it means that students in 300 Level now will not be graded on CPGA 7.0.

"I have no choice but to answer the clarion call", Yahaya Bello added.

Yahya is a thief and cannot be our president

Because of His Grace, you will never be disgraced. ... See MoreSee Less

May God show and grant you access to your hidden treasures. Amen. ... See MoreSee Less

On Monday, a Federal High Court in Abuja, fixed February 21, 2022 for judgment in a suit seeking to challenge former Vice-President Atiku Abubakar’s eligibility to contest for the office of the president. The date was fixed by Justice Inyang Ekwo after taking arguments from counsel to the parties in the suit.