President Theodore Roosevelt once said that the president as a “steward of the people should take whatever action necessary for the public good unless expressly forbidden by law or the constitution”.

In the case of President Muhammadu Buhari, the opposite is true. Buhari is against everything that would bring relief, happiness, peace, progress, and prosperity to Nigerians. Buhari has taken every action to uproot the rule of law and to subvert the constitution.

The cost of Buhari’s despotism and incompetence is stupendously frightening. Millions of Nigerians are suffering. Millions are dying as I write. Our economy has collapsed. Our justice system has become the annex of Aso Rock under the direction of Buhari. Unemployment remains untamed. Aging and dilapidated infrastructures are everywhere. Our ancient healthcare system is an invitation to death. Which is why Buhari shuttles London infirmary every time for medical treatment. Nigerians have become captives under the iron rule of Buhari.

In 2015, Buhari campaigned as a “crocodile liberator”. Flashing his trademark sickening smiles, he assured the world that he was a born again democrat that would uphold the rule of law. Now we know Buhari is a vengeful dictator with all ignoble qualities of a tyrant. In a systemic and systematic way, Buhari has consolidated his tyrannical rule by dismantling any semblance of rule of law. He has literally suspended our constitution. He disobeys court orders at will.

Buhari as a predator, goes about looking for his critics to prey upon. One of his biggest catch is Omoyele Sowore. Sowore, a former presidential candidate, who ran on populist agenda of good governance and open government, has been unlawfully held in solitary confinement by Buhari’s lawless and ragtag secret service – Department of State Services. Sowore’s offense was calling for #RevolutionNow, a peaceful protest against Buhari’s corrupt and incompetent regime. DSS abducted Sowore midnight over 100 days ago on trumped up charges of insulting Buhari, of planning to overthrow Buhari’s regime, and of money laundering.

Twice, Sowore was granted bail. Twice, Buhari refused to release him. Buhari in his short four plus years as president has become one of history’s cruellest, most dangerous, and most unpredictable tyrants. Within that short period, Buhari has restored oppression and cruelty. He has worked manically to increase unconstrained power. He rules by campaign of sadism.

Buhari as a tyrant wants to be completely free of all constraints. But ironically, he’s the most enslaved because he surrounds himself with bodyguards, yes-men, and people who will feed his ego and desires. Supporters and defenders of Buhari’s tyranny are slavish and are willing to debase themselves to appease the deformed soul of a heartless tyrant.

For once, Nigerians should put aside all differences – politics, religion, and ethnicity – and fight for the soul of our democracy. I don’t care, you may not like Sowore. It doesn’t matter, you may disagree with his political philosophy. You may not agree for what he’s fighting for. Of course, many of you hate his guts, his audacity, his boldness, his courage, his incorruptibility. That’s understandable. But the issue at stake is not about Sowore. It’s about the soul of our democracy. It’s about the rule of law. It’s about our constitution. You must rise up and tell Buhari that he’s not a king. He’s not an emperor. He’s your steward. Come together and speak up. Demand that Sowore be released today. Tell Buhari to respect the rule of law. Ask him to obey court orders. Advise him to stop violating the constitution he swore to uphold. Stop this evil tyrant!

Buhari is on the wrong side of history. Nigeria will outlive him. He will go the way of his ancestors – the Idi Amins, the Mugabes, the Abachas, the Mobutu Sese Sekos, the Pharaohs, and other tyrannical beasts in history that were consumed by the wrath of the people. History beckons!

Sowore: Government Has Ordered Investigation Into Invasion Of Court By DSS -Malami 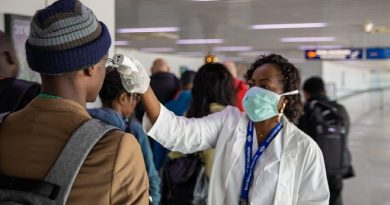 Insecurity, Poverty in Nigeria getting out of control, FG must act fast – Labour

The Member of Parliament for Shai-Osudoku Constituency in the Greater Accra Region, Linda Akweley Ocloo has paid a visit to