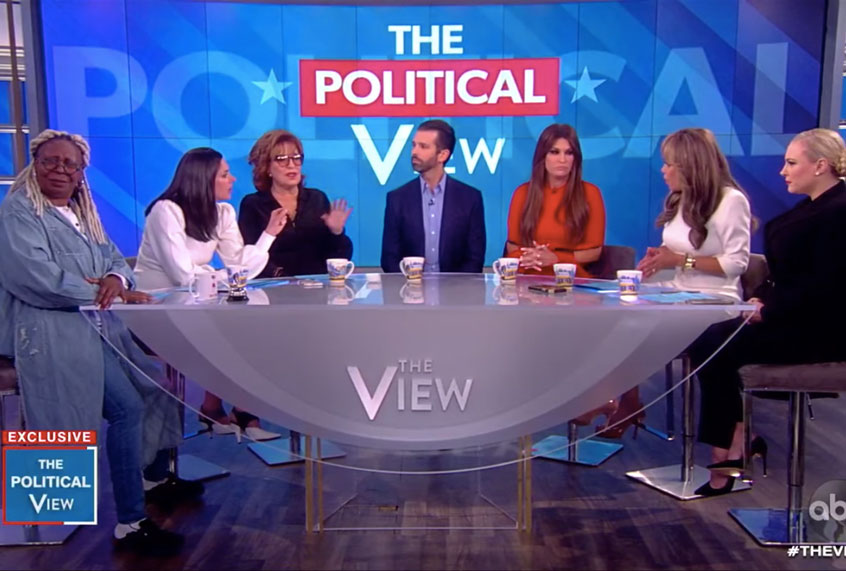 Donald Trump Jr. came under fire for posting the name of the purported Ukraine whistleblower to his Twitter account as soon as he arrived Thursday to the set of “The View.”

Conservative co-host Abby Huntsman immediately called Don Jr. out for publishing the whistleblower’s name on Twitter at the top of the segment.

“The whole point of releasing a name is to intimidate someone — to threaten someone and to scare other people from coming out,” she said, calling it “something that dictators do.”

“I’ve lived in China,” the daughter of a former U.S. ambassador added. “I’ve seen that firsthand. That’s not what America does.”

Don Jr. pointed to the fact that the purported name had already been published online.

“I literally quote-tweeted an article that had the guy’s name in the title of article,” he said.

The president’s son then spun the conversation to allege that there is “no outrage” when something bad happens to his family.

“He asked to be anonymous,” co-host Joy Behar said. “Your family did not.”

“For days, he’s been out there in the media,” Don Jr. said of the alleged whistleblower.

“It’s different when his son does it though, isn’t it?” asked co-host Sunny Hostin.

“Why?” Don Jr. asked. “I’m a private citizen putting this out there.”

The president’s son then claimed that he thinks people are “outraged,” because people can see the purported whistleblower has “ties” to Joe Biden and CIA Director John Brennan now that “his name is out there.”

The named official worked for the CIA and on the National Security Council while former President Barack Obama was still at the White House.

The hosts insisted that Don Jr. was putting the whistleblower at risk, prompting his girlfriend, the former Fox News host Kimberly Guilfoyle, to repeat that the “name was out there.”

Don Jr. then invoked the “hypocrisy” of the left-wing media, leading Huntsman to invoke Julian Assange, the Wikileaks founder, who she called a “cyber-terrorist” and a “Russian puppet.”

“If you talk about hypocrisy, you seem fine with people leaking information if it makes you and your father look good,” Huntsman said, referring to the 2016 election.

“Your dad praised him on the campaign trail,” she continued. “How is this whistleblower, who went through the right channels — you’re releasing his name out there and putting his life in danger — but WikiLeaks was doing the right thing?”

Instead of answering Huntsman’s question, Don Jr. looked to Guilfoyle to respond. In spite of being the son of the president and a campaign surrogate, she insisted that Don Jr. was a private citizen before attempting to change the topic.

Moderator Whoopi Goldberg shut down down her argument, which she called “disingenuous.”

“You can’t say you’re a private citizen and yet you’re in the middle of all of this,” she said. “You’re part of this.”

“We don’t know that that’s actually happening to him,” Don Jr. said of the threats aimed at the whistleblower.

“We don’t know that it happened to you,” Goldberg shot back.

Hostin, a former federal prosecutor, pointed out that it was against federal law to identify a whistleblower.

“You’re a lawyer,” Hostin said to Guilfoyle. “Did you advise your boyfriend that it was a federal crime to out a whistleblower?”

“I didn’t advise him that it was a federal crime, but I did come out of the bathroom and said, ‘I left you alone for ten minutes, what happened?’” she replied.

“It’s only a federal crime for the [inspector general] to do it,” Don Jr. insisted.

“My law degree says it is,” Hostin shot back.

“Do you regret tweeting that?” Hostin asked Don Jr.

“I don’t think I should have to forego my First Amendment right, “ he said.

Later in the segment, Hostin asked Don Jr. about the infamous July 25 call on which his father solicited Ukraine to investigate former Vice President Joe Biden while withholding military aid appropriated by Congress.

Trump and Guilfoyle claimed that the aid was not withheld for that reason, and Ukraine did not know. (Trump officials have testified it was, and they did.)

“That’s a lie,” Hostin said. “There have been several ambassadors that testified.”

“Did Gordon Sondland lie?” asked Hunstman, referring to Trump’s ambassador to the European Union who donated $1 million to his inauguration. (Sondland changed his earlier testimony to admit a quid pro quo .)

“I don’t know why he changed his testimony,” Don Jr. said, before suggesting that it was out of fear of being attacked by the “vicious left.”

You can watch the segment below:

Mary Trump sues family for fraud: “Fraud was not just the family business — it was a way of life”

On Ice Cube, Donald Trump, and the question of what my vote is really worth 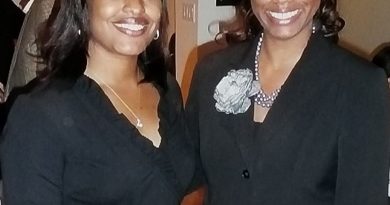 With or Without Hair, We Send a Message

Private legal practitioner, Martin Kpebu has criticized the media’s reportage of the case involving two juveniles alleged to have killed