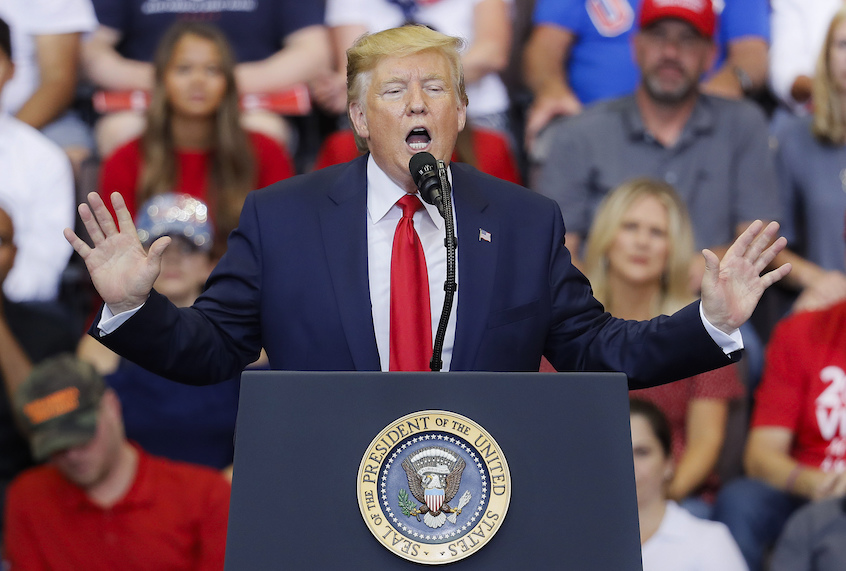 In the conventional view of American politics,  Joe Biden is a moderate while Elizabeth Warren and Bernie Sanders are on the left and Donald Trump is on the right.

This conventional view is rubbish. Today’s great divide is not between left and right. It’s between democracy and oligarchy.

There are no longer “moderates.” There’s no longer a “center.” The most powerful force in American politics today is anti-establishment fury at a rigged system.

Four decades ago, when America had a large and growing middle class, the left wanted stronger social safety nets and more public investment in schools, roads and research. The right sought greater reliance on the free market.

In those days, a general election was like a competition between two hotdog vendors on a long boardwalk extending from left to right. To maximize sales, each had to move to the middle. If one strayed too far left or right, the other would move beside him and take all sales from the rest of the boardwalk.

This older American politics is now obsolete. As wealth and power have moved to the top  and the middle class has shrunk, more Americans have joined the ranks of the working class and poor.

Most Americans — regardless of whether they were once on the left or right — have become politically disempowered and economically insecure. Nowadays it’s the boardwalk versus private jets on their way to the Hamptons.

As Rahm Emmanuel, Barack Obama’s chief of staff and former mayor of Chicago, told the New York Times: “This is really the crack-up. Usually fights are Democrats versus Republicans, one end of Pennsylvania versus the other, or the left versus the right. Today’s squabbles are internal between the establishment versus the people that are storming the barricades.”

In 2016, Trump harnessed many of these frustrations, as did Sanders.

The frustrations today are larger than they were in 2016. Corporate profits are higher, as is CEO pay. Markets are more monopolized. Wealth is more concentrated at the top. Although the official unemployment rate is lower, most peoples’ incomes have gone nowhere and they have even less job security.

Meanwhile, Washington has become even swampier. Big corporations, Wall Street and billionaires have flooded it with money and lobbyists. Trump has given out all the tax cuts, regulatory rollbacks and subsidies they have ever wanted. The oligarchy is in charge.

Why hasn’t America risen up in protest? Because American democracy was dysfunctional even before Trump ran for president. The moneyed interests had already taken over much of it.

It’s hard for people to get very excited about returning to the widening inequalities and growing corruption of the decades before Trump. Which partly explains why Biden is foundering.

At the same time, Trump and his propagandists at Fox News have channeled working-class rage against the establishment into fears of imaginary threats such as immigrants, socialists and a “deep state.”

But a large majority of Americans — right and left, Republican as well as Democrat — could get excited about moving toward a real democracy and economy that worked for the many.

This is why the oligarchy is so worried about Warren’s rise to frontrunner status in some polls.

Politico reports that Democratic-leaning executives on Wall Street, in Silicon Valley and across the corporate world are watching her with an increasing panic.

“Ninety-seven per cent of the people I know in my world are really, really fearful of her,” billionaire Michael Novogratz told Bloomberg.

In just the third quarter, Buttigieg raised about $25,000 from executives at Wall Street firms including Goldman Sachs, Morgan Stanley, JPMorgan and hedge fund giants like Bridgewater, Renaissance Technologies and Elliott Management. And another $150,000 from donors who described their occupation as “investor”.

If Biden implodes and neither Buttigieg nor Klobuchar takes the lead from Warren, Wall Street and corporate Democrats hope former New York mayor Michael Bloomberg will ride into the primary at the last minute.

It won’t work. The stark reality is that Democrats cannot defeat Trump’s authoritarian populism with an establishment candidate who fronts for the oligarchy.

The only way Democrats win is with an agenda of fundamental democratic and economic reform, such as provided by Warren and also by Sanders.

Unless Democrats stand squarely on the side of democracy against oligarchy, the risk on election day is that too many Americans will either stand with Trump or stay home.

Sassenachs, this “Outlander” ice cream is worth your time . . . and a few hours of effort

This is the nice. Is esan Union in Germany

Which side you people de

There are Masses going on in the Catholic Church. But there are no public Mass celebrations. Priests are expected to celebrate private Masses for the living and the dead, for all their members, for their immediate society and for the world as a whole. The Catholic has Masses going on around the world. It's just they are not attended by the public but the public intentions are considered at the Masses.

Amen and so shall it be ooo