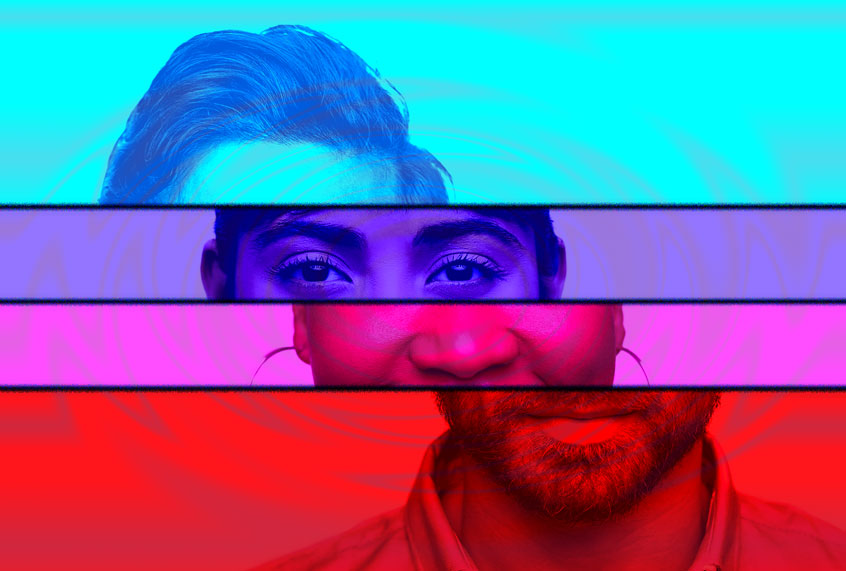 An increasing number of nonbinary people are being represented on screen — Asia Kate Dillon on “Billions,” Indya Moore on “Pose,” and most recently, possibly on “Euphoria.” As nonbinary visibility has increased in pop culture, the binary blue and pink world of gender reveal parties has grown increasingly jarring to encounter, even when potentially lethal explosives aren’t involved.

In July, the originator of the gender reveal party, Jenna Karvundis, wrote in a Facebook post that she has a lot of mixed feelings about her “random contribution to the culture.” And she delivered a mic drop: “PLOT TWIST, the world’s first gender-reveal baby is a girl who wears suits!” As a 26-year-old gender non-conforming person who grew up having my femininity monitored and judged, hearing that a baby who was initially cast prominently into a world of pink has now upended those norms made me smile.

I grew up in Singapore with a mother who detested the heels and makeup I stashed away in my room, calling them “improper” and “embarrassing.” Sometimes she would enforce that by throwing them out. I’ve since lived in London and New York City, but that doesn’t mean I don’t still face remnants of the same kind of scrutiny.

One day, I was sitting on a plush leather couch in a café with my head down, engrossed in reading. When I looked up, my eyes met a tall bearded man walking past. He winked at me. Eva, my friend sitting next to me, invited him to sit down with us. He struck up what seemed like an innocuous conversation with me, asking the requisite getting-to-know-you questions like “Where are you from?”

Then the conversation took an uncomfortable turn. He reached out to put his arm around me. He touched and stroked my head. He asked, “Why do you have short hair?”

“You’re pretty, but it’s uncommon for girls to have short hair,” he continued. “If I’m in bed with you and I’m looking at you from the back, I want to know you’re a girl.”

No one had asked for his opinion on my hair. And who said anything about being in bed with him?

Weeks later, as Eva and I recounted the horror of this experience, a male acquaintance from school interrupted. “I have to ask — you’re a guy, right?” he said. “I’m confused. You have nail polish on, and . . .”

I said nothing, hoping if I stayed silent and let his question linger unanswered in the air, it would disappear.

Since Karvundis popularized them in 2008, gender reveals have become an increasingly ubiquitous and baroque phenomenon. In the last decade, we’ve seen everything from cringe-worthy cake cutting fails to outright destruction. A Border Patrol agent who shot colored powder at a target sparked a wildfire in Arizona that burned nearly 47,000 acres and caused $8 million in damage; last week, a woman in Iowa was killed at a gender reveal by a piece of shrapnel when “what amounted to a homemade pipe bomb” exploded, presumably to release pink or blue smoke.

Why risk such destruction? Sociologists Candace West and Don H. Zimmerman argue that gender is about establishing oneself as a socially recognizable person in society. Asia Kate Dillon, the first gender non-binary character on television, said they found it fascinating that the first question an interviewer asked about their dog was whether it was a boy or a girl. “As if the context is needed for them to understand something greater about the dog,” said Dillon.

Someone recently told me a person with a large build bumped into him on the subway. It felt like being elbowed. He wasn’t able to tell if the person was a man or woman, but upon reflection, he believed that would determine how he felt about whether the bump was an act of aggression or an accident. “If it were a man, I would view it as a challenge,” he told me.

In the same way, many parents rush to categorize children so they know how to treat them. “A gender-reveal party might at least take on a sheen of medical accuracy if it were called a ‘sex-reveal party,’” as Jessica Winter wrote in Slate, but instead they conflate sex and gender. The colors blue and pink aren’t inherently gendered — pink used to be the socially accepted color for boys, and blue for girls. As much as gender norms have progressed, this binary thinking can be subconscious and hard to undo.

People often find me soft-spoken, especially in noisy places like crowded restaurants. My mom once told me that my voice made me sound “weak” and that I should “change that.” I surmise that my mother’s logic was rooted in linking feminine traits like a softer voice with being soft, weak, and unassertive. Women are often told they have to change their speech patterns to be taken more authoritatively — the pitch of their voice, uptalk, vocal fry — while men’s voices are automatically taken as such. But why should femininity be associated with being weak or not assertive?

Detractors of gender equality in business, technology, politics and the sciences often point to characteristics associated with femininity such as cooperation or emotion, and masculine-associated traits like ambition and rationality — or the false “thing vs. people” binary — as a reason why its “natural” that women are under-represented.

When we all free ourselves from binary ideas of what a “boy” or a “girl” should be, we all stand to gain our full humanity. As Karvundis wrote, “Who cares what gender the baby is? I did at the time because we didn’t live in 2019 and didn’t know what we know now — that assigning focus on gender at birth leaves out so much of their potential and talents that have nothing to do with what’s between their legs.”

As a writer, I’m asked what subjects I want to write about. One of the biggest that comes to mind is gender. But as much as I’m fascinated by it, sometimes I wish I had the luxury not to care about gender so much. This is something that women and other marginalized people are particularly familiar with — being hyper aware of our self-presentation and how we are perceived in the world. I wish not to have to think about how I am perceived. I just am, and I just want to be. I care about gender so much that I dream of a world where we won’t have to care about it anymore.

DNC’s first night was claustrophobic and grim: A compelling mirror of life in America

How “House of Cards” prepared Robin Wright to direct “Land,” a moving tribute to nature & resilience