The Socio-Economic Rights and Accountability Project has made several recommendation to the President Muhammad Buhari in a view to ensuring that freedom of press is not gagged.

SERAP made the call in a new report launched in Lagos on Wednesday.

The report which was prepared by SERAP in conjunction with National Endowment for Democracy, touched on how various military and democratic office holders had tired to undermine the power of the media over the years.

The group stated that if the press was to be able to perform its roles effectively as enshrined in sections 22 and 39 of Nigeria’s 199 constitution (as amended), it must not suffer any legal impediment.

It said, “President Muhammadu Buhari must condemn all attacks on journalist and media organisations.

“He should issue a clear and public statement to all government and security officials over any acts of intimidation, threats, harassment, and arbitrary arrests of journalists and media workers, and state that such incidents will be immediately investigated and appropriately prosecuted.

“He should publicly condemn all harassment, intimidation, and attacks on journalists, bloggers and media organisations by state governors.” 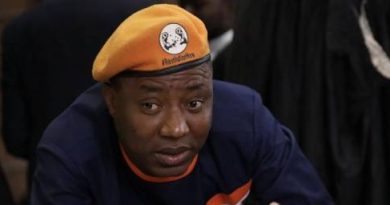 We Cannot Back Down By Omoyele Sowore

The National Lottery Authority (NLA) would like to caution the general public, players of NLA Products/Services, and the media that,