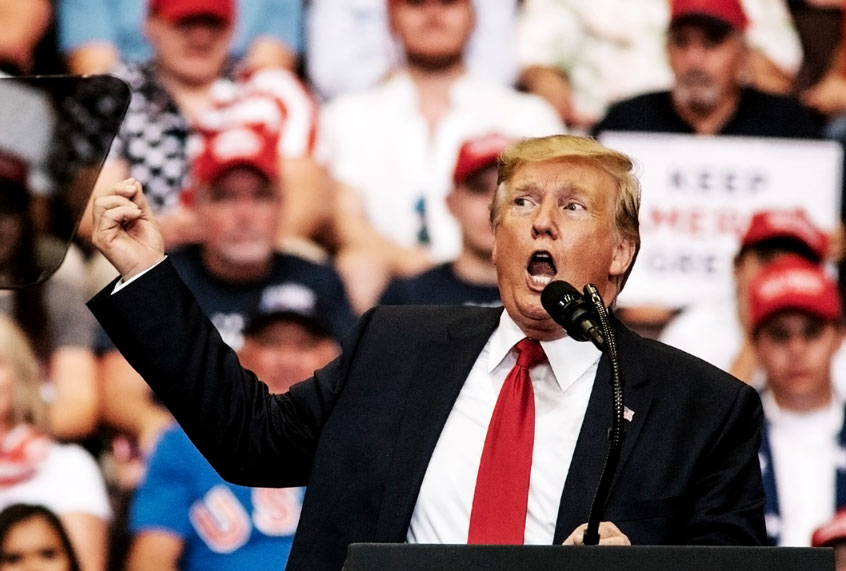 Donald Trump is angry that his allies think he’s a nimrod, at least according to Asawin Suebsaeng of the Daily Beast. White House sources have told Suebsaeng that Trump is privately whining that “people should stop saying he’s too dumb or incompetent to do crimes,” and bragging that he is, on the contrary, totally smart enough to escape accountability for his criminal behavior.

The immediate impetus for this tantrum is a Wall Street editorial last week that, with a stench of desperation detectable even through a computer screen, argued that Trump can’t possibly be guilty of making quid pro quo demands for political assistance in exchange for military aid from the Ukrainian leadership because he is, quite literally, too stupid to pull such a thing off.

“[I]t may turn out that while Mr. Trump wanted a quid-pro-quo policy ultimatum toward Ukraine,” the editorial board wrote, that doesn’t matter because “he was too inept to execute it.”

The “too stupid to do crimes” defense was also offered last week by House Minority Leader Kevin McCarthy, who argued that Trump’s efforts to blackmail Ukraine can’t be quid pro quo because Ukraine never gave up the quo to get the quid.

“Name me one thing that Ukraine did to release the money,” McCarthy said, sounding aggrieved about Trump’s failure to obtain the ransom he was trying to extort from Ukrainian President Volodymyr Zelensky.

Failing to complete a crime that you are in the process of committing is not really an effective criminal defense, of course, as any burglar who gets caught sneaking out of a house with someone’s TV in hand can tell you. “Not guilty by reason of being a dumbass” is not and never has been an acceptable defense in a court of law, nor should it be in impeachment proceedings.

But this defense isn’t just wrong-headed in its legal analysis, but also wrong on the basic facts about Trump’s criminal competence. Trump may be as dull as a crayon, but he’s not wrong to believe he can commit crimes and get away with it. We know that because, so far, he has. And there’s every indication he was about to pull off this Ukrainian extortion scheme as well, if not for the whistleblower who ratted him out to House Intelligence Chair Adam Schiff, D-Calif. For that matter, Trump may yet get away with it, even without the booty he was trying to extract from the Ukrainians (that being phony validation for various anti-Democrat conspiracy theories), since the Republicans who control the Senate still seem poised to ignore all the evidence against Trump and refuse to convict him.

Despite all the movies that have exciting supervillains who escape consequences on the sheer power of their IQ alone, the reality about crime and punishment is it has less to do with how smart you are and more to do with how privileged you are — and how much the system around you can shield you from consequences.

Grim statistics showing that race and social background are strong predictors of whether someone will end up in jail should be enough to demonstrate this, but so should any number of news stories from the past decade or so: Stories about privileged sexual predators evading justice for crimes as serious as rape, the relatively light sentences for fraud dealt out to the parents in the college admissions scandal, and the fact that only one top banker did any time for destroying our economy in 2008 are all examples that come to mind.

No one has demonstrated more clearly than Trump that privilege matters more than intelligence when it comes to getting away with crime. Trump’s lawyers and Justice Department officials have, with relative success, been able to argue that “executive privilege” protects Trump from being charged with crimes he pretty clearly committed. Even special counsel Robert Mueller, in his testimony before Congress, agreed that once Trump left office, he could likely be indicted for the long list of obstruction of justice actions Mueller catalogued in his investigation.

Trump has so far escaped accountability for committing a campaign finance crime in paying off his mistresses for their silence during the election. Indeed, in the classic move of overprivileged criminals everywhere, had a subordinate — his onetime personal lawyer, Michael Cohen — take the fall for him.  There’s a similar situation going on with Trump’s former campaign manager, Paul Manafort, who is sitting in prison (on unrelated charges) and seemingly has not uttered an incriminating word against his former boss. Trump has openly praised Manafort because he “refused to ‘break.'”

Trump also has nearly the entire Republican caucus, Fox News and other right-wing media outlets, and Attorney General Bill Barr to protect him by manipulating the media and the voters to the point where Democrats felt afraid, at least before the Ukraine scandal broke, that any effort to hold Trump accountable was doomed. That’s a defense team that puts even O.J. Simpson’s to shame — and, unlike Simpson, Trump doesn’t even have to pay for it.

The ugly truth is that Trump was clearly going to get away with this Ukraine crime, if not for the whistleblower. As Brian Beutler at Crooked Media pointed out, the testimony of Bill Taylor, the acting U.S. ambassador to Ukraine, “reveals that Zelensky nearly announced sweeping investigations of Trump’s enemies on television, just as Trump, through surrogates, had demanded of him.” Such an announcement would have built on conspiracy theories that Trump and Giuliani had successfully seeded in the mainstream media, most notably through New York Times reporter Ken Vogel, who was so eager to float right-wing talking points that he didn’t notice his principal sources were literally involved in a criminal conspiracy.

Trump is, no doubt, pretty dumb. He seems to sincerely believe that he cleverly disguised his obvious threats made to Zelensky during that famous July 25 phone call. He was legitimately surprised that  Washington baseball fans booed him when he showed his face at a World Series game. He is notoriously bad at reading.

But here’s what Trump is good at: leveraging his power and privilege in order to get away with crimes. The man nearly convinced mainstream sources like CNN and the New York Times to elevate a smear job against Joe Biden, concocted through illegal means, into the news cycle. He has escaped justice for clear-cut criminal misconduct several before. And it won’t be until November of 2020 that we’ll know for sure whether he’s been able to wriggle away from any accountability yet again.

The SECURE Act: How it could help investors save for retirement

Speaker Edo State House of Assembly Rt.Hon.Frank Abumere Okiye has been officially discharged after tested Negative to Covid - 19 May God be praise for his faithfulness ..🕺🕺🕺 ... See MoreSee Less

I believe u we repent now

Glory to God my brother, it's the lord's doing, he will continue to protect us and our family in jesus name.

God is so great and wonderful

I beg watien our nma doctors take treat u

Thank God for the guick recovery

They need to kill all of them

Someone should use English to interpret

Translate it in english pls

From animals too fire,this one worst

Corona virus is not a killer disease in Nigeria all the people tested positive came our negative through the help of our home base doctor. Why are we still inviting Chinese doctors or they suppose to invite Nigeria doctors for consultation

Tanks be to God

Y can’t Nigerians for once tell themselves the truth or tell the world the truth people were tested positive now they are well. What did they use in treating them? Those people only had malaria and Typhoid not Covid 19.

Thanks be to God

Thank You Jesus for the healing to You be the Glory.

Congratulations my brother, the devil has failed.

Hallelujah and thanks be to the most High God! May his name be praised for ever and ever more in Jesus mighty name, amen!! Congratulations dear brother! And to God Almighty alone be all the Glory!!

Who is deceiving who? Was he ever positive?

Amen so shall it be in Jesus mighty name amen,

FG to shut down oil refineries for upgrade — NNPC GMD