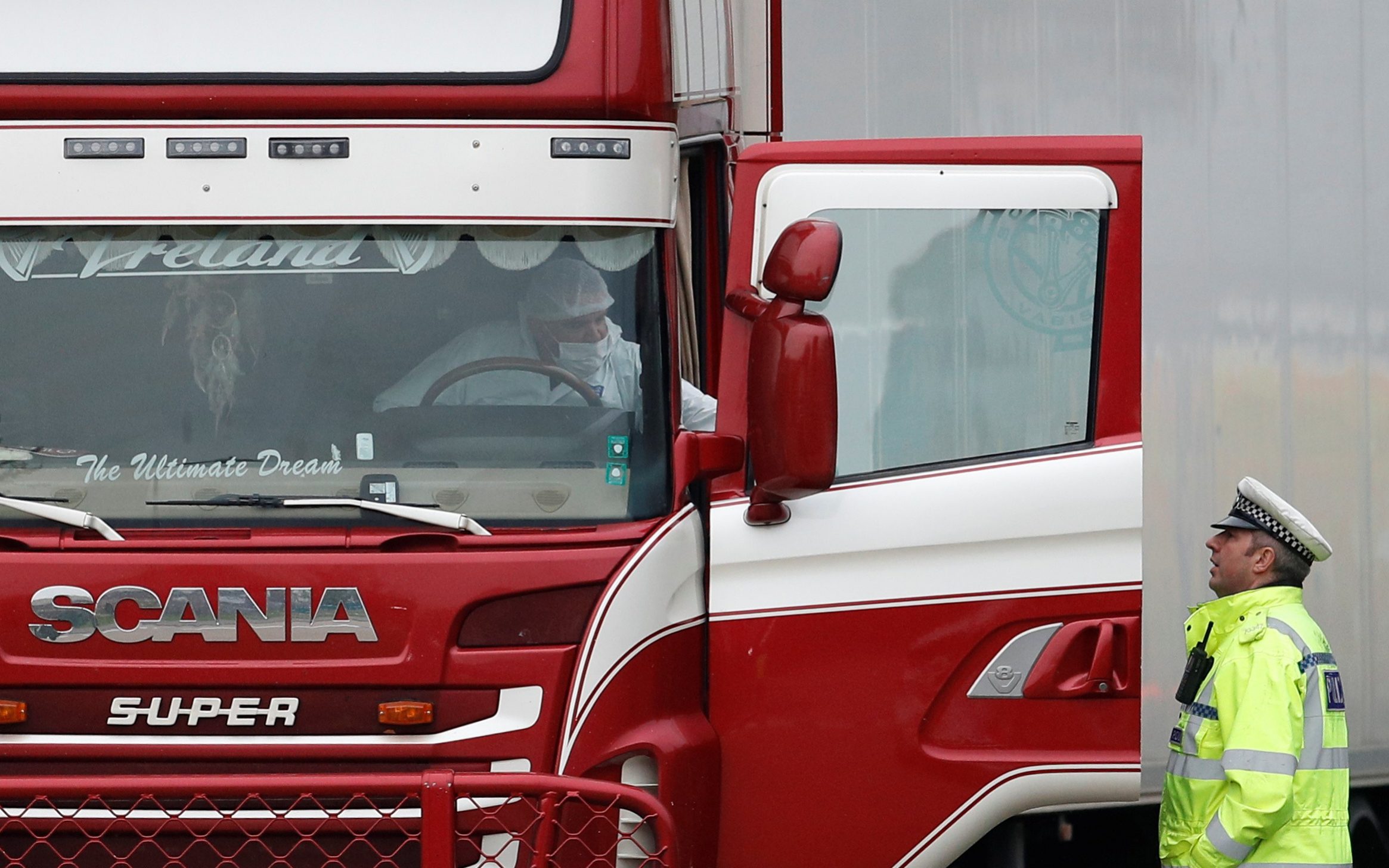 An Irish people-smuggling gang suspected of being at centre of the Essex lorry container deaths has been under investigation for a year, it has been claimed.

A specialist financial crime team in the Republic of Ireland have been looking at whether alleged members of the gang have been smuggling cigarettes and alcohol into the UK.

The news will raise questions over how they were able to continue operating and what intelligence was shared with the British authorities.

It emerged as Mo Robinson, the 25-year-old driver of the truck, appeared in court where it was alleged that he is part of a “global ring facilitating the movement of large number of illegal immigrants into the UK” and had been conspiring to traffic people for the last 10 months.

Four suspects, including three women from Nghe An province and one male from Hanoi, were also arrested by Vietnamese authorities in connection with the case.

Essex police were on Monday night also due to question Eamon Harrison, a 23 year old truck driver from County Down in Northern Ireland, who was arrested at Dublin Port on Saturday in relation to an alleged assault in the Republic of Ireland last August and held in custody.

Belgian prosecutors revealed that the refrigerated container in which the victims had been travelling had not been turned on and the cargo was listed as “biscuits”.

Many of those who are missing feared dead last had contact with their loved ones in France, raising fears that this could be where they were loaded onto the lorry.

The truck’s GPS shows that it travelled to Calais and Dunkirk before returning to Belgium. Mr Robinson collected the truck in the early hours of Wednesday morning after it traveled by ferry from Zeebrugge to Purfleet in Essex and is believed to have called an ambulance to alert authorities.

He is charged with 39 counts of manslaughter of persons unknown, conspiracy to traffic people between December 1 2018 and October 24 2019 and conspiracy to assist unlawful immigration between the same dates. He was further charged with one count of acquiring criminal property and one count of concealing criminal property, both between December 1 2018 and October 24 2019.

As he appeared in court Boris Johnson and Priti Patel, the Home Secretary, both visited Thurrock in Essex to sign a book of condolences to the 39 dead.

The Prime Minister wrote: “We mourn those who lost their lives. Our thoughts are with their families far away. In condemning the callousness of those responsible for this crime, we in the government of the United kingdom resolve to do everything in our power to bring the perpetrators to justice.”

More arrests are expected to be made in the coming days as officers close in on a network of criminals that operate in county Armagh in Northern Ireland and in county Monaghan, just over the border in the Republic.

Prominent members of the network have interests in transport and logistics firms and sources claim that for the past number of years, the gang has been smuggling alcohol and cigarettes into the UK and Ireland.

It is understood that more recently it has branched out into people smuggling activities through contacts it has established with other international criminal gangs. It was reported in Irish media over the weekend that the Criminal Assets Bureau (CAB), which is responsible for investigating whether financial assets are the proceeds of crime, has investigated this gang over the past year.

It is understood that the CAB is now part of a wider investigation which is being lead by Essex police.

A spokesman for An Garda Síochána declined to comment on the extent of this investigation, whether any action was taken, or whether any intelligence was shared with any other agencies in Ireland or the UK.

Steve Harvey, a former senior Europol officer and expert in trafficking, said that in an investigation that crossed borders it is likely that “basic intelligence” such as names and minor details of the suspected offences would have been shared with other countries.

He said that if Irish authorities thought that the gang were involved in people smuggling there will be questions to answer as to how they were able to continue operating.

“If it is cigarette smuggling or smuggling illicit commodities then you might want to let it run to gather evidence. But it is a very different issue if there are human beings involved.”

Joanna and Thomas Maher, both 38, from Warrington were arrested in Cheshire on Friday and a 46-year-old man from Northern Ireland was arrested at Stansted Airport later the same day.

All three had been questioned on suspicion of manslaughter and conspiracy to traffic people and have since been released on bail.

The authorities have now sent documents to Vietnam to help identify some of the 31 men and eight women found dead.

In their home towns, families of those missing feared dead had begun to lose hope at being reunited with their loved ones and had started setting up shrines in their memory.

The family are like many others said to now be in a large amount of debt for the journey.

President Akufo-Addo has said his fight against illegal small-scale mining will not be based on hearsay and unsubstantiated allegations. Speaking