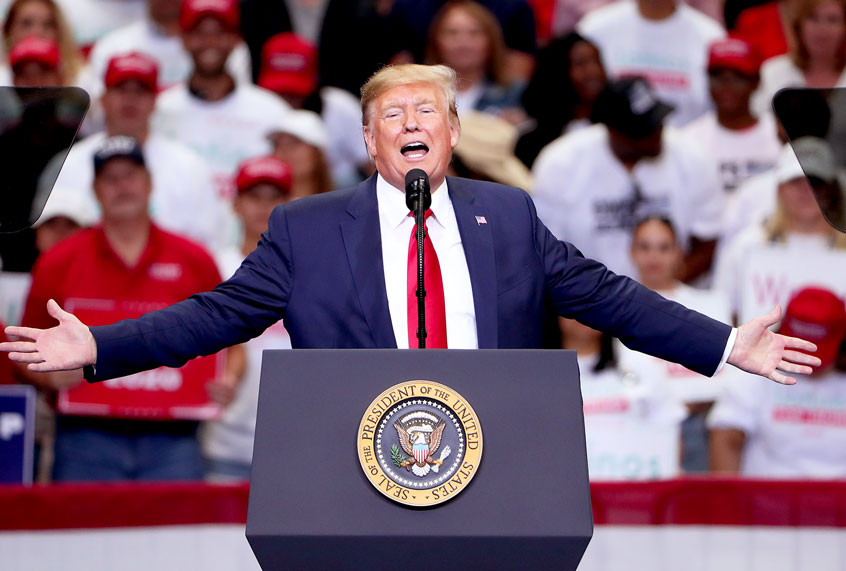 I predicted well before the 2016 presidential election that Donald Trump would be elected. I had felt that way ever since he rode down that golden escalator with his rapist invective. Ever since he was elected, I’ve also believed that he’ll be re-elected, more easily this time.

An illustrative personal anecdote, one of many over the last three years: A creative writing PhD I know with tons of debt, whose wife happens to be an undocumented Filipina, became mightily angered by the promise of student debt cancelation. What about those who have paid their dues by taking out debt, he asked? No doubt he would refuse a blanket amnesty for “illegals” too. His DACA wife, as he sees it, paid her dues.

Columnists at the New York Times are all angry at the possibility of decriminalizing of border crossings, health care for the undocumented and the abolition of private insurance. In fact, they don’t want to do away with Trumpian inhumanity. They want the oppression to continue, but without the transparent rhetoric.

Minus the Trumpian rhetorical overlash, war, empire, violence, hollowness, junk goods and a junk life are all the people have ever known and all they want.

Historical movement in long cycles can’t be short-circuited, as we can see in the resistance of the liberal elite toward Bernie Sanders, the only candidate who could beat Trump, versus the stampede toward Elizabeth Warren, who provides a “safe” alternative and will surely lose.

But what kind of a fascist doesn’t start a war in three years? Trump doesn’t need war: He has brought the war home by making us confront our emptiness directly. He is the catalyst we needed at this time, and he is fulfilling his purpose beautifully. America is exhausted, which the liberal elites don’t get.

Trump keeps making noises about Iran, but he hasn’t actually done it yet. His pullback at the last moment, when the bombers were supposedly already on their way, is a trope that makes sense to a lot of people. We could have, in a science-fiction world, the repetition of this particular action — pulling back from the brink, the antithesis to Strangelove-style irrevocability — day after day, and it would be the right psychotropic drug to rouse us.

And what kind of a huckster is he? He constantly keeps changing his mind, which is not a character flaw, but the essence of his “deal-making.” America can’t find a better deal — from the New Deal to the Fair Deal to the imaginary Green New Deal, a landscape of lost opportunities and blighted dreams — so contingent honor, betrayed promises and infinite self-cancellation constitute the only kind of deal-making possible. And unlike on “The Apprentice,” there can be no winner at the end, while the rest get fired, because the endless prevarication — saying two things at the same time, often diametrically opposite — is what constitutes deal-making. We’d better get used to it: It is the end point to a century of liberal social planning.

To be totally adrift, Trump is saying, is to have total freedom. The empire embraces its most recent eruption of vulgarity, barbarism and eco-destruction as a welcome development — or at least the dispossessed do, if not the meritocrats. To move beyond the dead language of liberal political correctness, which all the Democratic candidates suffer from, is a great service. Trump is preparing us for the imminent turmoil of the coming decades — concluding in secession and fragmentation by mid-century — with the kind of language the empire needs now. He’s reading history well, only too well, far better than his ideological opponents, the neoliberal globalizers or the democratic socialists.

Not one of his opponents is prepared to say that power is America — brute, unforgiving, no-second-chances power. This kind of power requires a base removed from liberal education. He reforms language every day, in his tweets, which emanate from our deepest unconscious, such as when liberal stand-up comedians turn out to be racists and misogynists in their revealing moments.

As we prepare for the age of brutality, he’s telling us — as the Times columnists confirm every day in the limits they impose to compassion — that the recent gloss of multicultural tolerance, in the Reagan/Clinton/Obama years, was the final fantasy. His border wall seeks to literalize the walls of segregation and inequality that have been going up relentlessly all throughout the interior. He won’t start wars of humanitarian liberation, because that was the foreign aspect to the domestic malevolence passing as tolerance.

Former UN ambassador Jeane Kirkpatrick counseled in the 1970s that we could work with good authoritarians around the world, but not with socialists. Trump’s affection for Narendra Modi, Jair Bolsonaro, Vladimir Putin, Kim Jong-un, and Mohammed bin Salman is nothing new. It is how we have always operated, even in the halcyon days of Henry Kissinger’s détente, when we violently crushed democracy in Chile and elsewhere, or under the spiritual Jimmy Carter, when we trapped the Russian bear in Afghanistan, much to Zbigniew Brzezinski’s delight.

Trump doesn’t want to restart history, to repudiate Francis Fukuyama or Bill Clinton. Nor does he want to start a clash of civilizations, to validate Samuel Huntington or George W. Bush. He is content with leaving history alone, which seems natural, coming so soon after the younger Bush’s counselors, who wanted full-spectrum dominance. The deal, as Trump sees it, is ever-changing, immune from textual recreation, legal solidity, constitutional affirmation.

What is his obsession with China then? China for the last three decades has been a management consultant’s dream come true. Trump is not playing a zero-sum game, a chessboard called economic nationalism, with China. With him we move beyond oligarchic nationalism or even democratic fascism. China helps construct a total vacuum of thought, reaching even beyond the vulgarity of trashy American consumerism. We no longer want their tacky goods. We want the Harley-Davidsons back — or not, it’s OK if they don’t come back. If we can’t recall manufacturing, and we leave world trade, then we are thrown upon a manly ideal, where we make things and do things for ourselves, except that Trump and his followers know that that ideal is well past reach, going out of fashion with the rise of consumerism precisely a century ago.

The 2020s: An exact reversal of the rise of optimistic consumerism in the 1920s. History does have its symmetries, if you know where to look. The end to advertising, news broadcasting, modernist propaganda, the religion of self-help and therapy, physical fitness, institutionalized spying and technological utopia.

Trump’s attack on the media, the breathing tube for an empty liberal consumerism that died long ago, is the most welcome move to his fervent supporters. You can’t believe a word you see. You have to create your own reality, which the Internet helped bring about starting in the 1990s. Consider the real scandal of Joe Biden’s son’s corruption, already noted matter-of-factly in leading newspapers, versus the impeachable scandal of just talking — airing out possible deals to land political opponents in trouble. Torture, assassination, deportation and ecocide are all within the pale, for the resistance, for those who would like to replace him with an acceptable alternative who will take empire back to where it was.

But it’s not going to happen, because he was never the bearer of a virus, which implies something alien. He is the perfect mirror, just as Nixon followed Lyndon Johnson, Reagan followed Carter, and Bush followed Clinton, in performing not so much an oscillation but an exaggerated return to form. Empires, heavy and difficult to maneuver, don’t engage in circular or sideways motions. Trump is the accelerant to the end point that empire needs now, just as Reagan and Bush served their functions earlier, and in that sense he is a true man of the people. You don’t beat a man of the people electorally. You just don’t.

Anxious about going out into the world post-vaccination? You’re not alone, but there’s help

The surreal manipulation of “Black Bear,” a comic thriller with answers that “hover out of reach”

On Saturday, the 5th of October, 2019, Design Fashion Africa wrapped up its first event in Lagos with a live