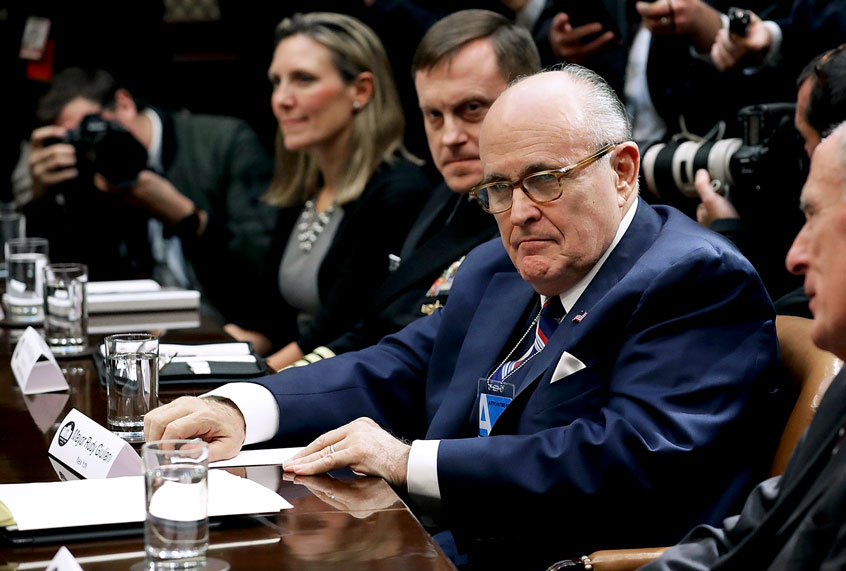 President Donald Trump’s personal attorney, Rudy Giuliani, has reportedly begun to search for a defense lawyer of his own — days after declaring that he did not need one.

“If they take me to court, I would then have to get another lawyer,” Giuliani told CNN on Oct. 15. However, he did not comment Wednesday when the network asked him about a criminal attorney.

Giuliani’s search for representation comes just days after Giuliani split ways with attorney Jon Sale, the former Watergate prosecutor who he hired for assistance with the House impeachment inquiry.

“At this time, I do not need a lawyer,” Giuliani said earlier this month. It is “silly to have a lawyer when I don’t need one,” he told The New York Daily News.

While Giuliani has decided that he does not need legal assistance in the impeachment probe, the former federal prosecutor’s search for a defense attorney comes amid an investigation into his business dealings in Ukraine by U.S. attorneys in the Southern District of New York, the same office he once led.

Federal prosecutors are also looking into his connections to Lev Parnas and Igor Fruman, two associates who helped Giuliani track down dirt on Democrats in Ukraine. Parnas and Fruman have pleaded not guilty after being charged with federal campaign finance violations. Counterintelligence investigators have also reportedly probed Giuliani’s dealings.

Kenneth McCallion, a New York attorney, told CNN that federal investigators first questioned him about Giuliani’s ties to Parnas and Fruman as early as February. Investigators are looking at Giuliani’s business dealings in Ukraine and “whether a foreign influence operation was trying to take advantage of Giuliani’s business ties in Ukraine and with wealthy foreigners to make inroads with the White House,” the outlet reported.

The indictment of Parnas and Fruman did not mention Giuliani, who claims that he has no knowledge of any investigation into his business dealings.

Parnas and Fruman helped connect Giuliani with Ukrainian officials as the president’s attorney searched for dirt on former Vice President Joe Biden and his son.

Giuliani tweeted on Wednesday that “everything I did was to discover evidence to defend my client against false charges,” Giuliani said. The “false charges” appear to refer to Trump’s debunked conspiracy theory that Russia never hacked the Democrats, and a Ukrainian company has the server to prove it, which Giuliani has promoted despite no evidence. That server was at the heart of what chief of staff Mick Mulvaney appeared to describe as a quid pro quo with Ukraine, before later trying to walk his admission back.

Parnas and Fruman donated money to then-Rep. Pete Sessions, R-Tex., to get him to press the Trump administration to fire Ukrainian Ambassador Marie Yovanovitch, federal prosecutors said. Yovanovitch testified to Congress that she was ousted after Giuliani waged a smear campaign against her after she blocked his anti-Biden efforts.

Parnas and Fruman have a long history with both Giuliani and Trump. Parnas’ Instagram account shows him at events with Trump and his eldest sons, Donald Jr. And Eric, the Wall Street Journal revealed. One photo shows a note apparently signed by the president and the first lady, thanking Parnas for his “friendship.” The photos also show Parnas flying on a private jet with Giuliani ahead of midterm elections. One day after the Mueller report’s release, Parnas posted a photo of him at a “celebration dinner” with Trump’s legal team.

The pair donated $325,000 to a pro-Trump PAC in May 2018, which federal prosecutors have called an illegal straw donation intended to advance the interests of an Ukrainian official.

A federal grand jury has also demanded documents from the pair that “records of extravagant spending at Trump hotels and millions of dollars in financial transfers by Lev Parnas and Igor Fruman,” BuzzFeed News reported.

In spite of their significant involvement in his personal attorney’s hunt for dirt in Ukraine and the many photos in which they appear together, Trump has denied any knowledge of the men.

Along with the investigation into his ties to Fruman and Parnas, Giuliani still faces possible ramifications for refusing to comply with the House impeachment probe. Numerous administration witnesses who have appeared before impeachment investigators have alleged that Giuliani ran a shadow foreign policy in Ukraine, and Trump directed officials to “talk to Rudy” about Ukraine policy. Giuliani has claimed to have only been representing his client.

Some Democrats have predicted that the next Trump administration official to throw Giuliani under the bus could be the president himself.

“We’ve seen this movie before, with Michael Cohen,” Rep. Harley Rouda, D-Calif., told Politico of Trump’s now-imprisoned former personal attorney. “Giuliani’s going to get thrown under the bus. The president’s going to make it sound like, ‘I didn’t tell him to do this or that. He was rogue. He went out on his own.’ And we all know that’s not true, but I think we can all lay a bet down on how this story ends. And that’s what you’re going to see.”

Dr. Bleach-Injector and his death cult want you to get “herd developed”

The IGP, Mr. James Oppong-Boanuh, has directed that all police officers on election duties on December 7 should trim their