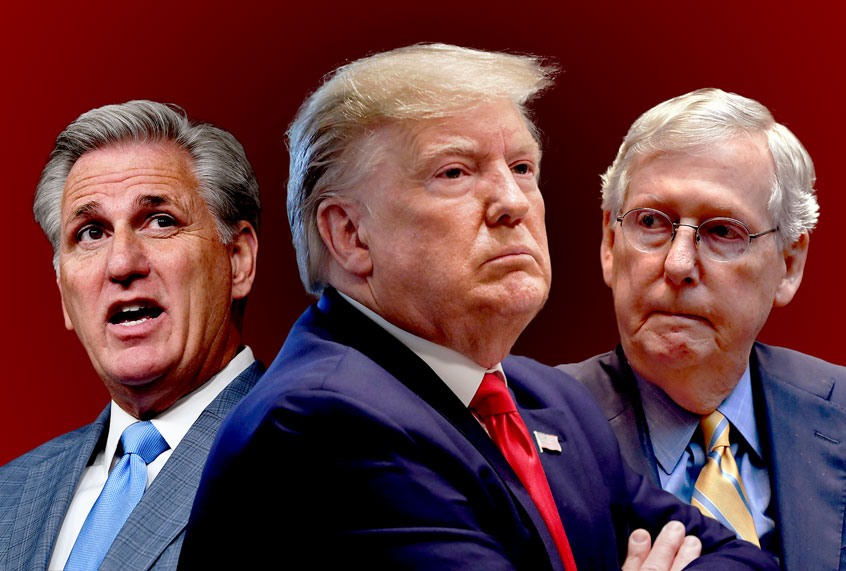 It’s no great mystery why Republicans continue to defend Donald Trump, even as his obvious crimes and corruption pile up: They think it’s the best way to maintain power. Trump may be chaotic and embarrassing, but he signs off on major Republican priorities, mostly meaning right-wing judges and tax cuts for the rich. Republican voters, mainly motivated by bigotry and a desire to stick it to liberals, adore Trump’s trollish behavior and generally worship him like a god. So the party’s leading political figures have gone along with the whole thing, making transparently silly arguments and generally making fools of themselves standing by the orange gremlin in the White House.

Trump, in other words, is a price Republicans have to pay to keep their multi-decade deal — or, to speak more directly, their long-term grift — going. This deal is simple enough: Republican voters will continue to elect officials who dismantle the American dream by concentrating all the wealth at the top. In exchange, those elected official will inflict pain on the people that Republican voters hate, such as independent women, people of color, immigrants and LGBTQ people.

This deal has worked out for Republican politicians for decades, even as many of their base voters are watching the opioid crisis and worsening economic inequality devastate their communities. The prevailing evidence suggests that they can keep this grift up for decades — but only if there’s no serious disruption to the American or world order that could wake right-wing voters from their Fox News stupor. Something like a major war. Possibly even a world war.

Media coverage of Tuesday’s House committee testimony from career diplomat Bill Taylor, currently the U.S. chargé d’affaires in Ukraine, has understandably focused on Taylor’s confirmation that Trump withheld military aid in an attempt to force Ukrainian President Volodymyr Zelensky to publicly back Trump’s conspiracy theories about his Democratic rivals. But reading Taylor’s full testimony, it’s also striking how much Trump was willing to risk Ukrainian independence — a tactic experts believe could destabilize European peace — as part of his self-interested scheme to cheat in the 2020 election.

“Ukraine is important to the security of the United States,” Taylor emphasized in his remarks, adding that if America believes “in the principle of sovereignty of nations on which our security and the security of our friends and allies depends,” supporting Ukraine in against Russian aggression is necessary.

Until recently, Trump’s relative reluctance to get involved in foreign wars served as a rationalization for continued Republican support. Whatever crazy crap Trump might do at home, and no matter how terrible and cruel his policies (such as treating political refugees like criminals), it didn’t really seem that he was a direct threat to world peace or likely to draw the U.S. or its allies into a serious war. Therefore he also wasn’t likely to create the kind of political chaos at home that war can often bring, as when World War II reordered American politics for decades, rendering the kinds of right-wing taxation schemes Republicans prefer inconceivable.

But now it’s becoming clear that Trump doesn’t need to be a trigger-happy militarist to destabilize international politics or launch a major war. Simply by treating foreign policy the way he treats most of domestic policy — as a piggybank to shake down for his own personal gain, regardless of the consequences — Trump is opening the door to international chaos. And that’s exactly what bad actors like Russian President Vladimir Putin want: The kind of chaos that could, if things go badly (and how could they not, with Trump in the White House?) lead to the kind of military conflict that reorders the world.

It isn’t just that, as Taylor described, Trump was playing chicken with military aid in such a way that almost reads as an invitation to Putin to escalate the invasion of Ukraine. It’s also the fact that Trump, seemingly as a lark, gave the green light to Turkish President Recep Tayyip Erdoğan to invade northern Syria, in a blatant act of ethnic cleansing against the Kurds.

That choice is arguably worse than Trump’s gamesmanship with Ukrainian military aid. The disastrous Syria decision will definitely further destabilize the region and could well lead to a resurgence of ISIS, as Kurdish forces in the area had been instrumental in breaking the power of the so-called caliphate. Unlike a lot of the destructive domestic policies Trump has undertaken, there’s no easy way to claw back the damage from this choice, and there’s also no way to know what the long-term impacts will be — except that they won’t be good and will likely lead to increased violence in an especially volatile area of the world.

We also don’t really know why Trump did it, though anyone with a working brain must presume his reason to sacrifice Kurdish lives and the uneasy peace of the region was pure self-interest, likely financial in nature. There’s every reason to worry that Trump’s cavalier, self-serving approach to foreign policy could disrupt the peace in similar ways all over the globe.

“It would be extraordinary, in fact, if Trump’s other foreign relations were all entirely proper, and if Trump had not abused the privileges and secrecy of his office to conceal corruption in any realm outside of Ukraine policy,” Brian Beutler of Crooked Media writes in a piece arguing that the impeachment inquiry should be expanded to a full audit of Trump’s international dealings.

“We know there’s a secure server at the White House that contains more improperly classified, politically scandalous summaries of Trump’s calls with world leaders,” he adds.

This fact shouldn’t just concern Democrats, who are understandably worried about Trump recruiting foreign help to cheat in the election, not to mention Trump’s general corruption. These realities should also concern Republicans. At this point, many of them don’t really seem to care about our country or its people, but if they care about their own power — and for that matter their ability to keep passing regressive, predatory and hypocritical legislation — they should definitely worry about Trump’s capricious approach to foreign policy.

It was hard enough for Republicans to shake off the political consequences from the American debacle in Iraq, even though the stateside effects were relatively muted. That was a major factor in Republicans losing the 2008 elections, despite the gerrymandering that gives them minority rule. Imagine how hard it will be for them to recover if Trump’s me-first foreign policy approach creates international instability leading to a more expansive war, perhaps one that involves Russia and our European allies, or numerous nations in the Middle East?

Republicans really should have a deep think about how such things have wide-reaching and unpredictable political consequences, the kind that shift political dynamics in nations for decades. The kind that lead powerful parties to fall apart. Of course, this might not happen. But then again, it might. Why take such a massive and unnecessary risk by letting a man whose only interest is in beak-wetting, no matter what the consequences, dictate foreign policy?

Sure, Fox News viewers won’t like it if Republicans switch gears and dump Donald Trump. But they also don’t love being wrung dry for every penny and they didn’t love basically losing the Iraq War, and they stuck with their party through all that too. Their faith can handle small shocks. That faith might not get past the really big shocks that Trump is inviting with his recklessness.

If Republicans have any remaining political smarts, and any instinct for self-preservation, they’ll remove Trump from office to protect themselves. But that’s admittedly risky too: The whirlwind of chaos Trump has created is big enough now that it might tear the Republican Party off its foundations.

“This is what collusion looks like”: GOP-led Senate report “far more devastating” than Mueller probe

Help protect your accounts. Set up a trusted contact.

The Hair Products That Our Favorite USA Olympians Swear By

Courtesy If there’s one thing Team USA doesn’t have time for while they’re competing in Tokyo right now, it’s hair