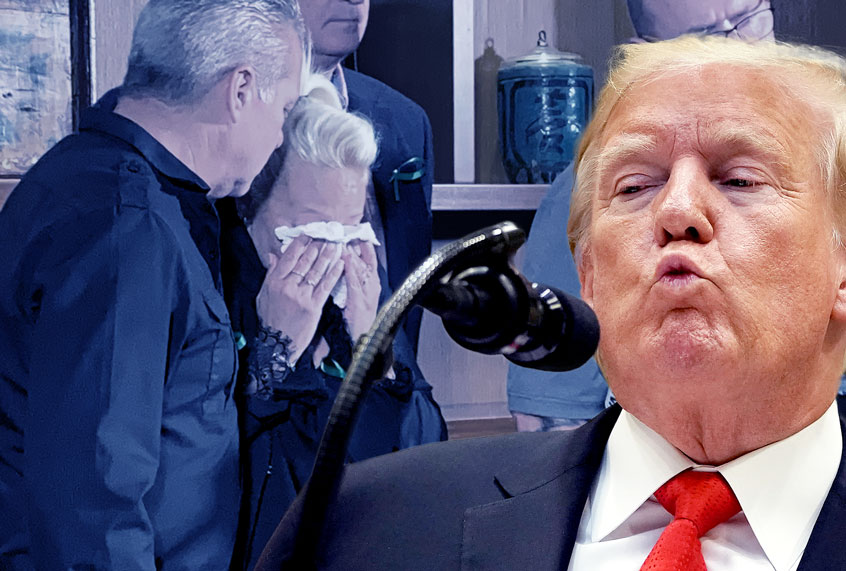 Maury Povich and Dr. Phil make surprise confrontations look simple.  Andy Cohen makes it look delicious. Mediation, in real life and in its many forms, is anything but either of those things. Often it can be an emotionally grueling, two-steps-forward-one-step-back endeavor that can take several encounters. And the parties in question may never reconcile.

You would not know this from watching the average television portrayal of such intercessions because TV is a medium that loves neat endings, even in cases that defy clean or swift resolution. Episodes of “Maury” or “Dr. Phil” or Bravo reality reunions are crisp packages that end, even if the taping merits a two-part treatment. The audience gets its fix and moves on.

It was probably naïve, or at least a failure in creative thinking, to not have foreseen that Donald Trump might one day call upon this particular unscripted format to inspire brokering a peace between a family in mourning and the party responsible for their grieving.  But our sitting president governs with an eye on ratings, so…here we are.

According to various reports, Trump tried to stage an ambush meeting between Anne Sacoolas, the wife of an American military base-employee, and Charlotte Charles and Tim Dunn, the parents of 19-year-old Harry Dunn, without letting making the Dunn family aware of his intention.

Weeks ago, Harry Dunn was riding in motorcycle near his home in Britain when Sacoolas, driving an SUV on the wrong side of the road, hit him. Dunn died from the injuries he sustained in the accident and Sacoolas subsequently fled the U.K. after claiming diplomatic immunity. This occurred in late August, and Dunn’s family, and British citizens, are understandably horrified and demanding justice.

Charles and Tim Dunn said as much on Monday when they spoke with “CBS This Morning” co-host Gayle King about their son. They also were very specific in expressing their feelings about meeting Sacoolas while they are here, which is what Sacoolas desires, according to what her lawyer told CBS .

“You don’t hope to meet her while you’re here in the United States?” King asks in the interview, to which Charles replies, “I don’t see what we would gain from that. If it was a few weeks back?…But, you know, we’re one week off from it being two months now.”

“We are still very open to meeting her,” Charles continues, “but it needs to be in a controlled environment in the U.K.” King then reiterates by way of a question that the family does not wish to meet with Sacoolas during this visit, which Charles confirms.

“We’ve been advised that it wouldn’t be the best thing for us to do,” she says, “and I think we need counselors and therapy…therapists around us.”

This is not an unreasonable request — this extraordinarily wrenching episode demands to be handled with care and concern, something any human being with a shred of empathy does not need to be told.

But in so many ways, Trump has demonstrated that empathy is one of the many qualities missing from his social programming. He draws his sense of worth from fame, praise, and validation, all of which he uses to measure the extent to which he is winning or losing.

This is why he’s such an avid Twitter abuser: for him it’s not merely a tool he uses to shift policy or change the media stream’s current, as if he were some galactic force with a gravitational pull. It’s a feedback loop where his supplicants can instantaneously feed his ego. Proliferating his image on TV and the Internet nourishes this hunger of his, and in return TV and the Internet interprets society and the rest of humanity to him.

It come as no surprise that, according to reports, he invited the Dunn family to visit the White House on Tuesday night, and blindsided them with the news that Sacoolas was waiting in an adjacent room to meet them, with cameras ready to capture every uncomfortable moment. Although jaw-slackening in its callous obscenity, this episode is also completely in character for Trump.

During a Wednesday joint press conference with Italian President Sergio Mattarella, Trump copped to the arrangement, which, according to him, happened at the request of British Prime Minister Boris Johnson. (The British PM’s office refused to convert that buck into a pound, and sent it right back to the White House to stop there.)

“I offered to bring the person in question in,” Trump said referring Sacoolas. “And they [the Dunn family] weren’t ready for it.”

The family itself saw the event under different lighting. “It struck us that this meeting was hastily arranged by nincompoops on the run and in particular [National Security Adviser Robert O’Brien] who appeared to be extremely uptight and aggressive and did not come across at all well in this meeting which required careful handling and sensitivity,” said family spokesperson Radd Seiger, in a statement posted to the Justice4Harry GoFundMe page.

Trump is known to watch a lot of TV, but if his knowledge of foreign policy or even basic facts tells us anything, his small-screen diet can’t be limited to news or else he would have picked up something useful by now.

What he thinks he knows, however, is television. No great revelation there; so many people have pointed out that Trump runs his presidency like a reality show that it barely merits mentioning anymore.  But this incident adds another layer to what many characterize as his sociopathy, in that he honestly seems to interpret what he sees on screens large and small as acceptable solutions to actual problems.

Trump’s purported suggestion to dig a moat along our southern border and fill it with snakes and alligators, or direct border security to shoot approaching migrants in the leg “to slow them down” are visuals that one would expect to see in a Paul W.S. Anderson video-game adaptation or “The Walking Dead.”

Someone whose narcissism is rooted in his belief in a thoroughly edited-for-TV version of himself, would naturally think that an unannounced face-to-face meeting between the Dunns and the woman who killed their son and fled from responsibility — in front of cameras, no less — was a fine idea.

Indeed, the only person who might think that way is a person who takes his cues of how to interface with the world almost entirely from TV.

If you’ve ever indulged in a few sick day TV binges over the years, you probably recognize the set-up conceptualized by Trump and O’Brien, who allegedly arranged for the Dunn family’s visit.

Take the standard “Maury” format, for example. A wronged party agrees to join the host as the main subject of an episode. They do this either by way of application or contractual obligation. The host coaxes the person through their woeful story, in which they lay out details of the misdeeds of their personal villain in front of an audience.

Then the antagonist comes on, greeted by stony silence or outright booing. In a Cohen-hosted reunion show on Bravo, the “Real Housewife” in question is already present and likely has interrupted her accuser(s).

By the end, in a best-case scenario, the warring factions reach détente or even claim to reconcile. If it goes the other way, chairs fly, tables flip, people angrily stalk offstage, and have to be talked down by a producers, all to the thrill of the voyeurs at home.

These episodes provide ersatz catharsis for the victim, the accused, and the audience. Together or separately, we tell ourselves, the healing can begin. It’s all a thoroughly edited and packaged, of course, and everyone — host, show participants, producers, and viewer— is in on the conceit.

That’s the crucial difference between unscripted television and the version of reality inflicted on the Dunn familyTuesday evening, one Trump and his White House enablers did not think about.

But between being the subject of an increasingly-popular impeachment inquiry and creating a humanitarian crisis and a diplomatic debacle by abandoning our Kurdish allies in Syria, Trump needs some kind of win. Burnishing his (reality show manufactured) image as a great negotiator by brokering peace between a grieving family and the American woman responsible for that grief would have given him a terrific campaign story and a beautiful tweet-storm.

Television can be a powerful educator, and the best television succeeds by making us feel, and feel deeply. But it is limited in its ability to provide solid guidance in handling fraught emotional situations.

“All of our grief has gone on hold,” Charles tells King in their interview. “It’s coming out in other horrific ways, like your legs feel like lead. You’re in pain, morning ‘til night, that no painkillers can take away. You’re not able to cry, because we can’t understand this whole situation as to why she would have left us without wanting to meet us back then.”

There are few scenarios more unstable than ones involving the personal agonies of grief and betrayal, each difficult enough to handle separately. People wondering what it must be like to contend with those two feelings concurrently only had to watch the Dunn family’s appearance on CBS News to obtain a sense of it. Normal, empathetic people, that is.

Is there a light at the end of the COVID tunnel for New York’s restaurants?

Cardi B Says She ‘Can’t Even Be Sexy in Peace’ When Her Toddler, Kulture, Crashes Her Video Selfie Moment