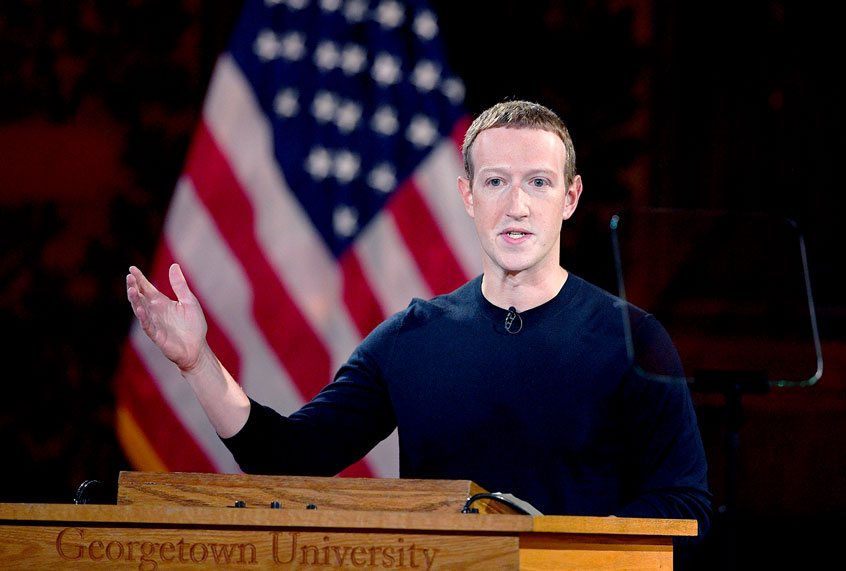 On Thursday, Facebook CEO Mark Zuckerberg gave a speech defending the company’s stance on regulating speech on the platform. The social media platform has no shortage of controversies when it comes to its inconsistent ability to manage its use among propagandists and hate groups. Some of the recent issues that prompted Zuckerberg’s public address include: Facebook’s policy around giving free rein to politicians to lie in advertisements; ennobling far-right groups promoting violence; being complicit in spreading conspiracy theories about the Sandy Hook massacre, which resulted in some parents of Sandy Hook victims receiving death threats; the platform’s role in foreign manipulation of the 2016 U.S. election; and Myanmar military personnel who used the social network to incite genocide, among other horrors.

Ironically, the 35-minute address on free speech took place at Georgetown University’s Gaston Hall — where presidents have delivered addresses in the past — in front of a group of students and educators who weren’t allowed to ask questions openly. Moderators collected questions from students and selected them beforehand, rather than risk Zuckerberg receiving unfiltered ones. As journalist Kara Swisher pointed out on Twitter, it is unclear is this was Zuckerberg’s call or not — though the boy-wonder CEO is notoriously stiff and awkward, particularly when speaking off the cuff.

Highlights of the speech included Zuckerberg defining “digital speech” — as in verbal expression on the internet — as falling into a separate category than journalism.

“People having the power to express themselves at scale is a new kind of force in the world,” Zuckerberg said. “It is a fifth estate alongside the other power structures in our society.”

“People no longer have to rely on traditional gatekeepers in politics or media to make their voices heard, and that has important consequences,” Zuckerberg added.

The speech comes at a time when the role Facebook holds in the 2020 U.S. presidential election is being scrutinized. As presidential candidate Sen. Elizabeth Warren (D-Mass.) illustrated by example, Facebook won’t remove political ads on its platform that blatantly spread misinformation. This is because the company recently eliminated a rule that for years had banned advertisements with misinformation. Likewise, the company said it will not fact-check the ads of political candidates. On Thursday, Zuckerberg went into more detail about that decision.

“We think people should be able to see for themselves what politicians are saying,” he said. “I don’t think it’s right for a private company to censor politicians or the news in a democracy.”

He added that he has considered banning political ads on Facebook, but he couldn’t figure out where to draw the line, and because this distinction wasn’t clear they company “should err on the side of greater expression.”

He said that allowing politicians to post their ads on Facebook also prevents citizens from favoring incumbents and whomever the media chooses to cover.

Despite the clear inconsistencies in these policies, Zuckerberg explained, “the long journey towards greater progress requires confronting ideas that challenge us.”

Many civil rights and progressive groups were alarmed by his public stance on “free” speech.

Rashad Robinson, the president of Color of Change — a progressive nonprofit civil rights advocacy organization — said in a statement that Zuckerberg double-downed on a business model that not only corrupts America’s democracy, but “fundamentally lacks an understanding of how civil rights, voter suppression, and racism actually function in this country.”

“Under the guise of protecting voice and free expression, Facebook, as in prior elections, is giving Trump and the right-wing a free pass to spread lies, hate and misinformation on the platform,” Robinson said. “It’s deeply ironic that Zuckerberg emphasized the importance of engaging with ideas and people who challenge you, when he refuses to meet with civil rights leaders.”

As Salon has previously reported, Color of Change has been publicly critical of Facebook since 2016, when a 23-year-old black woman named Korryn Gaines had her Facebook account deactivated during a standoff with Baltimore County Police. The organization later received death threats from a smear campaign launched by the social media company.

John Stanton, co-founder of the Save Journalism Project, said in a statement that “Zuckerberg is the antithesis of free expression.”

“He’s thrown pennies at programs to ‘help’ journalists that, in actuality, are little more than PR stunts intended to provide cover as he puts countless journalists out of work, strips the industry to the bone, and reaps billions in ad revenue,” Stanton said. ”He’s thrown free speech, public education, and democracy to the waste side in his quenchless thirst for power and profit.”

Muslim Advocates Executive Director Farhana Khera also criticized the speech for its failure to address anti-Muslim rhetoric on the platform.

“Facebook’s decision to broadcast false, hateful ads from politicians not only threatens democracy, it also threatens the personal safety of American Muslims, immigrants and other vulnerable communities,” Khera said in a media statement. “Facebook has run thousands of ads from the Trump campaign warning of an immigrant ‘invasion’ — language that was echoed by white nationalist mass murderers like the Christchurch shooter and the El Paso shooter.”

Trump projected his flaws on Hillary Clinton, and it worked — but 2020 is different 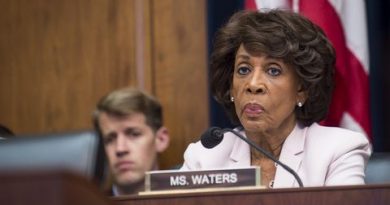 Maxine Waters and the Making of a Meme