Against the background of the recent sting reportage of sexual harassment in Nigerian universities, with special focus on the University of Lagos, I am surprised that many Nigerians are feigning ignorance of the ravaging scourge of sex-for-mark practice which infests our tertiary institutions. There was nothing new or too salacious about the BBC report. There was nothing more fundamental revealed in the report than what we had all been noticing and what had been hitherto reported in both the mainstream and social media for a long time now. Sexual harassment is as old as the university system itself and awarding grades for sexual gratification has been an age-old reality that had dogged the university system in Nigeria. So there was nothing new revealed in the sting report by BBC. There was nothing to elicit the kind of societal commotion the BBC report elicited.

Lest we walk away with a façade; sexual predation is not restricted to the university system alone. It is not a malaise that happens only in the tertiary institutions. In fact, increasing predilection to trade sex for one favour or the other traverse all human sectors. It is a disease that does not select its victims. It inflicts every sector, every age range, every gender, every strata of the society and it is not restricted to Nigeria alone. What becomes abhorrent and the reason why its debilitating effects in the tertiary sector of the country’ educational system is generating s much furore is that it goes to churn out graduates that hawk what someone derisively calls sexually transmitted degrees and these hawkers go on to seize the critical sectors of the country’s life and permeate such decay and rot that have plagued the Nigerian society.

But there are so many misnomers about our most recent concern about sexual harassment in Nigeria’s tertiary institutions. Apart from the mistake we make by thinking that sexual harassment is restricted to our educational sector, we are collectively misled into thinking that it is about male lecturers preying on female students. That is a gargantuan mistake. Female lecturers also prey on male students and most importantly, with the upsurge of same-sex relationships sweeping through the country, female lecturers also prey on female students to curry sexual favour in exchange for marks. Even at that, in many cases, it is the students that hawk sex to get grades from lecturers and this is very important in trying to deal with this anomie. The tertiary institutions in Nigeria are heavily padded with students who ought not be in the university but who, one way or the other, find their ways in our institutions and depend on hawking sex for grades. So in most of the cases, female students generously trade sex for marks and we should take this into cognizance in dealing with this issue.

Again, it is surprising that, because the University of Lagos was employed for the sting reportage, many Nigerians wrongly feel it is a scourge restricted to UNILAG. That is a naïve reasoning. The malaise is much more entrenched in universities that do not hug the kind of exposure and limelight UNILAG enjoys. It is a widespread nuisance that requires a far-reaching solution to deal with. Also, it is wrong, as I have already stated, to believe that it is a recent and restricted anomie. It is neither recent nor is it restricted to tertiary institutions alone. It ravages every area of human endeavor. We also note that many parents are aware and encourage this dastardly act from their wards as they share the noxious belief that the end justifies the means.

Then also, the sex-for-grade vice operates alongside cash-for-grade monster where students are equally required to trade cash for unearned grades. Both combine to deal ruthlessly with the quality of the academia and the emergent products of tertiary schools in Nigeria. The attendant calamitous damage this deals with the society where these products are unleashed is there for all to see.

Having said these, we, as a nation, must take the challenge the BBC sting reportage presented us to start putting down durable measures to curb the menace of sexual predation in our tertiary institutions, even if it is for the purpose of safeguarding our degrees from being rightly seen as sexually transmitted degrees with its attendant deleterious effects on our educational system and the corrosive damage to our nation. It is apt to say that sexual predation where lecturers prey on students and students prey on lecturers has become an accepted norm in Nigerian tertiary schools because there had been literarily no measures, laws or statutes trusted to deal with this. With time, university authorities have come to accept this as normal and have been lax in dealing with the very few cases that get reported. This has made this vice to flower to the extent that a lecturer makes indecent proposition to a someone he is meeting for the first time, as the BBC sting reportage revealed. Denying that it is exists or that it is widespread is the hypocritical way authorities and staff employ to trivialize the issue.

If we are desirous of dealing with this cankerworm, it is my honest opinion that the government must come up and enforce stricter laws and back it up with institutions, present n all campuses where cases could be reported, investigated and quickly prosecuted to ensure that culprits; both lecturers and students are adequately punished with strict sentences that involve rustication and jailing. An agency should be created for the purpose of tracking such cases and this agency should have presence in all tertiary institutions.

Also, there should be greater attention to the quality of academe that prevail in our tertiary institutions. Both lecturers and students need to go through rigorous examinations both at the point of entry and in the course of their duties to ensure that only those who qualify to be at tertiary institutions both as lecturers and students find their ways to these instructions. A situation where ill-qualified students and lecturers predominate our schools makes trading sex for marks inevitable.

The nation’s educational curriculum should be reviewed to ensure that eternal examiners feauture more regularly in the course of studentship to ensure that a student’s grades rhymes with his academic capacity. Leaving single lecturers decide the fates of students have given room for such illicit acts that flower trading sex for marks/ a student may be called in the course of his studentship to defend his performance or re-graded. Similarly, students must have inalienable rights to call up for their papers and have them re-assessed where they feel victimized for reasons of refusing to trade sex for grades.

To help deal with this scourge, unions and trade groups such as Students’ Union Governments, ASUU, NASU, etc, should be firmed up, encouraged to monitor this anomie in the various campuses and deploying such multi-pronged measures will not only ensure that guilty lecturers are tracked but also ensure innocent lecturers are not targeted by randy students for persecution. The intra campus unions should also be equipped with capacities to name and shame lecturers engaged in such practices.

As I have said earlier, the tertiary institution is just one of the many sectors ravaged by sexual predation. However, it is understandable why the issue of sex for grade in tertiary schools should generate concern as it has the capacity to vitiate the quality of education and extend very corrosive effects on the larger society.

My honest feeling is that sexual predation thrives in our tertiary intuitions because the systems prevalent in these intuitions tolerate it and have engraved it into the curriculum of these schools. Dealing with this malaise has ramained elusive because there is a guarded code binding staff and administrators to protect randy lecturers and not rock the boat. This has made it impossible to prosecute randy lecturers that trade sex for academic grades. Faced with the frustration that has been engendered by this ingrained we-feeling by university staff, students have been made to resign to fate rather than pursue cases of sexual predation by randy lecturers and vice versa. So, the present concern sparked off by the BBC sting reportage offers the nation the best chance to deal with this anomie and rid our educational system the lurid charge of trading in sexually transmitted digress 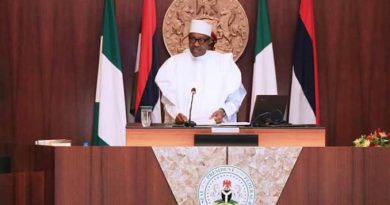 The national honour on Tinubu, Saraki others – Blueprint newspapers Limited

It has almost become a cliché to say COVID-19 is having negative socio-economic impacts on the world. As economists make

We Picked Favorites from the JLo Beauty Line