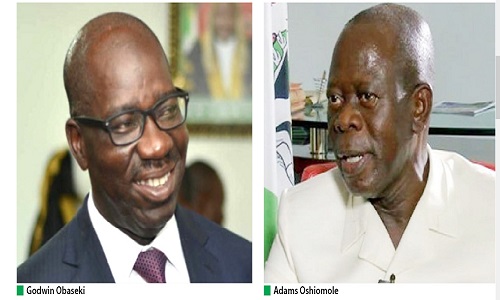 The quiet war between Governor Pius Obaseki and his estranged godfather and National Chairman of the All Progressives Congress (APC) Comrade Adams Oshiomhole is taking a toll on the relationships between members of the political class in the state.

Gone now are the days when politicians from different political camps interacted freely with one another without fear that any untoward meaning would be read into their actions.

These days, they have to think twice before they interact with members of rival political camps just so that they don’t get into trouble with their political mentors or benefactors. In one of such instances, the candidate of the Peoples Democratic Party (PDP) in last governorship election in the state was said to have got into trouble with his party members for  allegedly travelling in the same plane with Oshiomhole from Benin to Abuja after a chance meeting at the airport. PDP members in the state were said to have accused Iyamu of engaging in anti-party activities for hobnobbing with the national leader of the ruling party.

In another instance, Governor Godwin  Obaseki was said to have withdrawn his support for Hon Edoror as candidate for the seat of the Speaker of Edo State House of assembly simply because he visited Oshiomhole to tell him about his ambition and also seek his blessings.

Governor Obaseki was said to have interpreted Edoror’s visit to Oshiomhole as pledging loyalty to the APC national chairman, hence his decision to withdraw his support for him and transferring same to Frank Okiye who eventually became the Speaker in controversial circumstances. 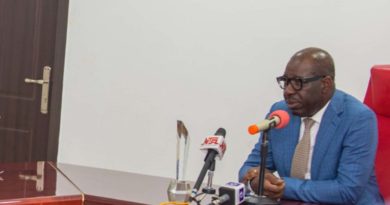