Great footage is the key to any good documentary. It is impossible to make historical films without it. Wole Soyinka’s article, “The Crimes of Buhari”, published before the 2015 presidential elections, is a gold mine of documentary footage of the sins of Buhari why he’s not a good president.

The character analysis of Buhari in his days as head of state by WS proves hypnotic. It gives us a rare snapshot of the man as a president. As we continue with the tyrannical rule of Buhari, we should be ready for the unprecedented reign of terror under Buhari who has been described by a friend of mine as “Islamist Jihadist masquerading as a democrat.”

However, the deed has been done: The election was rigged in his favor. We have plugged the obsolete political flash drive into presidential hardware.

In my opinion, no northerner elected president has proven prepared, capable, intellectually equipped or possess the native intelligence for the office of the president. Before I’m mauled by angry northerners, the Buhari apologists, and censors and willing agents of secrecy and repression of a tyrant, hear me out. So don’t shoot me yet.

The northerners have always succeeded in manipulating and dividing Yoruba to achieve their selfish political ambitions and to realize their self-fulfilling prophecy that they are born to rule Nigeria forever. They know that without the participation, collaboration, or cooperation of the Yorubas, any Hausa/Fulani oligarchy would not stand. They need the Yorubas more than the Yorubas need them.

Must northerners always be the president of Nigeria? What special qualities or talents or skills do they possess that Igbos or Yorubas lack? They have no special leadership qualities or talents or skills which should give them an advantage over the other two major ethnic groups. I’m not oblivious of the fact that Nigeria has not fared better under a Yoruba or Ijaw president. However, the records of northerners as presidents of Nigeria are as clear as they are compelling. They are the worst managers of men and resources you can think of.

The political wreckage train of Nigeria was designed, manufactured, operated, and crashed by either a northern Prime Minister, President, or Head of State. The worst dictators that ever ruled Nigeria are northerners: Abacha, IBB, and Buhari. The administrations of these demonic northerners plunged Nigeria into unprecedented political darkness and tortuous economic abyss we ever witnessed. Buhari as a
true despot that he is, he totally resents and rejects any criticism, debate, or discussion that exposes his tragic flaws as president. As a nepotist, Buhari is selfishly addicted to looking out for himself, his
family, and northerners. He has failed to cast or catch any vision for leadership.

How long are we going to endure with abnormal patience the ragtag northern despots known for their demented faculty of foresight? We need leaders with connected brains! Visions make leaders passionate, thorns keep them authentic. Buhari, what’s your passion? And where is your vision? Buhari and his northern hegemonists caused so much grief and graft. They still do. Nigerians, what will it take you to fight and halt the familiar evil schemes of a gap-tooth despot?

“The Crimes of Buhari” penned by WS detailed gems of sacred truth about the true Buhari many of us don’t know, are too stunning and too breathtaking to be ignored.

“The grounds on which General Buhari is being promoted as the alternative choice are not only shaky, but pitifully naïve,” WS warned us.

“History matters. Records are not kept simply to assist the weakness of memory, but to operate as guides to the future,” said WS.

To Buhari’s apologists who are quick and vocal to argue that Buhari is a changed man, WS cautioned them.

“Of course, we know that human beings change. What the claims of personality change or transformation impose on us is a rigorous inspection of the evidence, not wishful speculation or behind-the-scenes assurances,” said WS.

“Public offence, crimes against a polity,” continued WS, “must be answered in the public space, not in caucuses of bargaining.”

“In Buhari, we have been offered no evidence of the sheerest prospect of change. On the contrary, all evidence suggests that this is one individual who remains convinced that this is one ex-ruler that the nation cannot call to order,” WS reminded us.

On the rule of law, Buhari has no respect for the law. WS draws our attention to the fact that he was “…one of the generals who treated a Commission of Enquiry, the Oputal Panel, with unconcealed disdain.”

“Like Babangida and Abdusalami,” WS recalled, “he refused to put in appearance even though complaints that were tabled against him involved a career of gross abuses of power and blatant assault on the fundamental human rights of the Nigerian citizenry.”

On the sanctity of life, Buhari is controlled by impulse and blind rage to the extent that he became satanic in his cruelty. In fact, he enjoys termination of people’s life so much that he carried out “…the judicial murder, execution of a citizen under a retroactive decree.”

Again, WS provides us with the proof: “Does Decree 20 ring a bell? If no, then, perhaps the names of three youths – Lawal Ojuolape, (30), Bernard Ogedengbe (29) and Bartholomew Owoh (26) do. To put it quite plainly, one of those three Ogedengbe – was executed for a crime that did not carry a capital forfeit at the time it was committed.”

A leader must learn from his failure. Would Buhari change? No! “Since leaving office, he has declared in the most categorical terms that he had no regrets over this murder and would do so again.”

Expect the end of democracy as we know it under Buhari’s presidency. For the entire Buhari administration, Ebenezer Babatope was permanently housed in detention for his article warning that Buhari “was an ambitious soldier who would bear watching through the lenses of a coup d’état”.

He turned down all appeals to allow Babatope to bury his father who died while he (Babatope) was in the cellar. For publishing the truth, Tunde Thompson and Nduka Irabor both journalists were slammed into the gulag under Buhari’s obnoxious decree.

WS calls to mind Buhari’s assault on freedom of expression: “Not content with hammering down the freedom of expression in general terms, Buhari specifically forbade all public discussion of a return to civilian rule. To deprive a people of volition in their own political direction is to turn a nation into a colony of slaves. Buhari enslaved the nation.

“Buhari would be a president who administers justice selectively. He would protect his own by all means necessary”. Remember Buhari’s coup was staged to dislodge Shehu Shagari’s inept administration. Well, as WS explains, “Shehu Shagari was kept in cozy house detention in Ikoyi while his powerless deputy, Alex Ekwueme was locked up in Kirikiri prisons.”

For poor Nigerians, Buhari is a dreadful smell of death and doom. He is just like the rest of the hucksters who seek the presidency for personal profit as opposed to life-giving perfume. With Buhari in power, it will mean Nigerians will continue under constant danger of death, penury, oppression, suppression, hopelessness, and doomed life. WS prophetically nailed Buhari down as an incorrigible old unrepentant despot that would never change.

The events of late – the crackdown on critics – in particular, the abduction of Omoyele Sowore, the noncompliance of his bail order, and his continued detention – all sanctioned by Buhari proved WS right. Like all despots, Buhari will end up tragically and disastrously. It’s not if. It’s only a question of time. Nigerians, prepare for your mass funeral. Buhari the undertaker is coming! 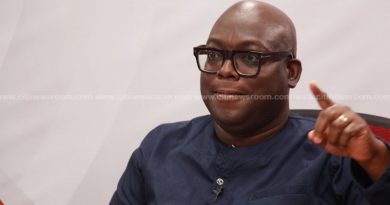 Speakership: Court Orders Substituted Service On Gbajabiamila Over US Fraud