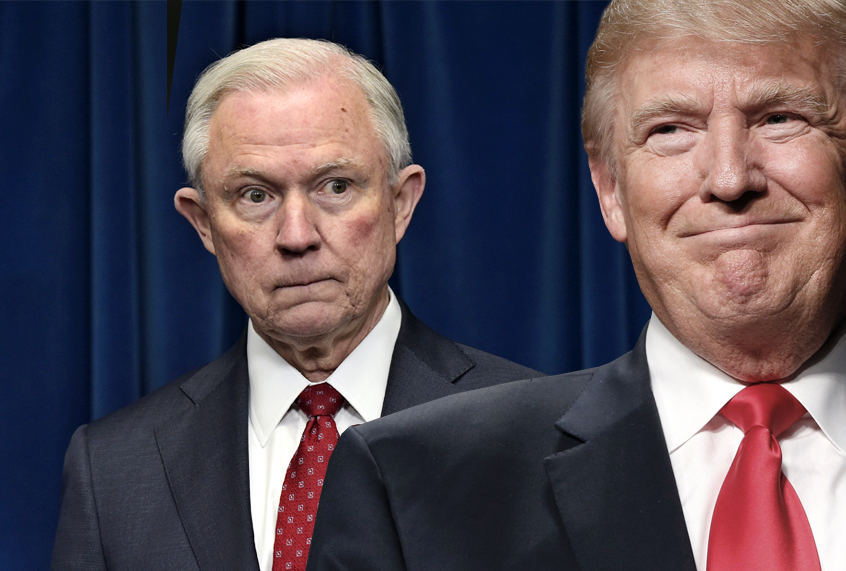 “You look at what’s happening over at the Justice Department, now we have a great attorney general. Whereas before that, with Jeff Sessions, it was a disaster. Just a total disaster,” Trump told former White House adviser Sebastian Gorka in an interview.

“He was an embarrassment to the great state of Alabama,” the president added. “And I put him there because he endorsed me, and he wanted it so badly. And I wish he’d never endorsed me. It would have been the greatest non-endorsement I ever had.”

Sessions has been publicly scorched by the president ever since he recused himself from special counsel’s investigation into Russian interference in the 2016 election. After Sessions recused himself from the probe, former Deputy Attorney General Rod Rosenstein oversaw the investigation and later appointed former special counsel Robert Mueller, who conducted a nearly two-year probe Trump has referred to as a “witch hunt.”

“The Russian Witch Hunt Hoax continues, all because Jeff Sessions didn’t tell me he was going to recuse himself . . . I would have quickly picked someone else. So much time and money wasted, so many lives ruined . . . and Sessions knew better than most that there was No Collusion!” Trump tweeted in June 2018.

In his interview with Gorka, Trump also applauded his alleged efforts to defeat the so-called “deep state” — a right-wing conspiracy theory that claims there is a covert network entrenched inside the federal government working to undermine Trump — and the “scum” in the upper echelons of the FBI.

“Now we have a great attorney general. And I think the destruction of the Deep State, certainly I’ve done big damage,” Trump told Gorka. “They’ve come after me in so many different ways — it’s been such a disgrace. But I think it’ll be one of my great achievements.”

The interview, which appears in Gorka’s new book, “The War for America’s Soul,” was published by right-wing news site The Daily Caller. It marks the latest instance of Trump berating Sessions, who has emerged as the president’s most consistent subjects of scorn and mockery.

Sessions was ultimately forced out of his role in November 2018, a day after the midterm elections in which Democrats seized control of the House of Representatives and Republicans expanded their slim majority in the Senate.

The former attorney general, who has largely stayed out of the public eye since his unceremonious dismissal, revealed earlier this month that despite nearly two years of being admonished by Trump, “I still do support him.”

He praised Trump for “relentlessly and actually honoring the promises he made to the American people,” Sessions noted in a speech to Alabama Republicans at the time.

Speculation has surfaced that Sessions may return to politics and run for his old seat in the Senate next year as Republicans target Sen. Doug Jones, D-Ala., who is considered the most vulnerable incumbent in the upper chamber. Sessions resigned from the Senate to serve as the nation’s top cop.

Why we’re lowering the cost of investing in ETFs

Don Jr. went to Mongolia, got special treatment from the government and killed an endangered sheep

Guest Speaker Rev. Dr. Ock Soo Park Listen to article Over the past few months, Christian ministers who perceive the