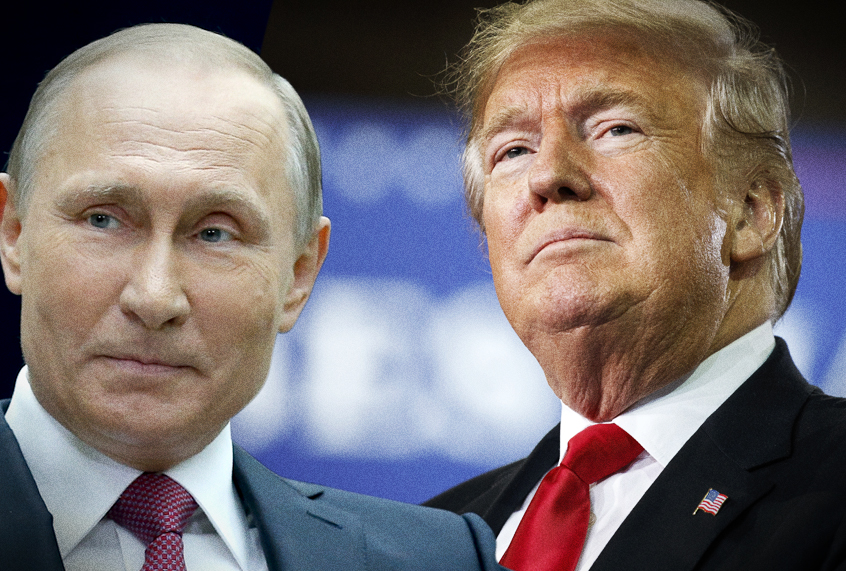 The Russians are calling it “Ukrainegate.”

“I never thought I’d say it, but CNN is right,” remarked one pundit on Russia 1, the county’s most-watched television station. “The person who wins in this situation is Putin.”

Commentary in Russian media about the impeachment investigation of U.S. President Donald Trump in many ways echoes the language of U.S. coverage. Just a few of the jokes are different.

“Of course, if Trump is impeached, he could probably return here, if you believe the American press,” laughed one Moscow-based moderator.

As a historian who studies contemporary Russia, I have seen the pro-Kremlin Russian political and media establishment grow increasingly skilled at spinning stories to highlight U.S. political weaknesses over the past five years — since conflict between the U.S. and Russia first erupted over Russia’s annexation of a portion of Ukraine.

This latest scandal, revolving around a phone call between Trump and Ukrainian President Volodymyr Zelenskiy, is a gift for those wishing to advertise U.S. dysfunction without seeming to engage in heavy-handed censorship or promote obviously deceptive propaganda.

One tactic is comedy. In a catchy YouTube feature by the Kremlin-funded English-language media service RT, titled “Ukrainegate: The Next Best Thing,” an enthusiastic young woman with a British accent gives a synopsis of the impeachment investigation. In less than three minutes, she succeeds in mocking both the U.S. and Ukrainian presidents, the U.S. political system, and the ignorance and condescension of the average Democratic operative.

She begins: “Despite all the effort that went into Russiagate, the claims against Donald Trump just won’t stick. Luckily for the Democrats, there are plenty more Eastern European countries that can be used to bring down a president.”

Ukraine is, of course, the country she’s referring to. “If you squint, it could even be Russia,” she says. “It’s big, it’s cold, and everyone speaks Russian … sort of.”

A Russian cartoon titled “Bastion of Democracy.” Democratic soldiers are firing an ‘impeachment’ cannon backwards, while Trump defends the White House with a sword.

Who is to blame?

Most Russian newspapers are echoing Republican condemnation of Democrats for allegedly concocting another scandal involving Trump after failing to find proof his campaign colluded with Russia to swing his 2016 election.

“The Democrats are making a laughingstock of themselves. If they are not careful, this could end up exposing a lot of Democratic corruption dating back to the Clinton years. But at least it’s keeping them busy — otherwise they’d return to interfering in the Russian economy.” So remarked one panelist to general applause on “Vecher” (“Evening”), a popular prime-time talk show with pro-Putin host Vladimir Soloviev.

“The actions of U.S. Democrats are exposing their country to global ridicule,” wrote Maria Zakharova, spokesperson for Russia’s Ministry of Foreign Affairs, on Facebook.

Russian pundits are also presenting the U.S. intelligence community as highly politicized and unreliable. Many repeat variants of Trump’s own angry tweets, accusing the security organs of trying to orchestrate a coup.

At the opening of Russian Energy Week in Moscow on Oct. 2, Russian President Vladimir Putin likewise criticized their actions, which he claimed had little to do with defending rule of law.

During Watergate, Putin said, U.S. President Richard Nixon got into trouble “for eavesdropping on his political rivals. But here we have a totally different situation. Here Trump was eavesdropped on … and some kind of anonymous employee of the special services distributed that information.”

A Russian cartoon by Sergey Elkin, featuring Zelenskiy wondering “Who should I make President of the United States?”

Even in defending Trump, the Russian establishment casts him as far more vulnerable than their own leader.

Putin, meanwhile, is taking a cool, professorial tone in describing the U.S. situation to international audiences.

“I was taught long ago to be aware that any of my conversations could end up published,” Putin remarked at the Energy Week panel, alluding to his past training in espionage. He claimed that, consequently, he had nothing to hide and did not oppose making public the transcripts of his meetings with Trump.

Nevertheless, even independent Russian media services generally critical of the Kremlin have pointed out that Trump, not Putin, might be the one with something to hide. Citing The Washington Post, internet news company Meduza reported that in one redacted meeting Trump held in 2017 with Russian Foreign Minister Sergei Lavrov, Trump allegedly said that “he wasn’t greatly upset about Russian meddling in the American presidential election of 2016, given that America has done the same thing in many other countries.”

As nationalist Eduard Limonov argued: “If I were in Trump’s position, I’d create my own secret service, answering only to me, and I wouldn’t drink or eat anything that wasn’t vetted by my own people.”

Even as Russian commentators defend both Trump and to some extent Ukrainian leader Zelenskiy, they also are taking the opportunity to remind viewers that the two men both lack political experience. Trump probably thought he and Zelenskiy, the star of a popular television sitcom before he became president, could be “kindred spirits, able to reminisce about promising TV careers ruined by a move into politics,” RT joked.

Amid a barrage of increasingly sensational Western headlines, Russian journalists can allow the U.S. media to do their work for them. Selective quotes from U.S. coverage of Washington’s bitter political battles are held up, in the Russian press, as examples of U.S. hypocrisy and decay.

At the same time, Russian leaders are presenting themselves as statesmanlike and above the fray. Their benevolent attitude, at least for the moment, appears to extend to Ukraine, thanks to Zelenskiy’s apparent willingness to make peace with the Kremlin.

“I don’t envy him,” said Prime Minister Dmitry Medvedev on a trip to Cuba, refusing to get drawn into a reporter’s question about whether “Zelenskiy has become Trump’s Monica Lewinsky” but still laughing at the jest.

Meanwhile, Putin continues to position himself to look strong on the global stage. Taking questions with a panel of oil and gas executives in Moscow on Oct. 2, he joked about planning to interfere in 2020 U.S. elections.

But, speaking the next day at the Valdai Discussion Club in Sochi to an audience that included the King of Jordan and the presidents of Kazakhstan, Azerbaijan and the Philippines, Putin emphasized that today’s complex world requires global cooperation and a sense of “common responsibility.”

Taking the tone of a parent talking about a small child, Putin suggested the U.S. try hard to correct its all-consuming domestic chaos. He stressed that Moscow will be willing to work with whomever the future U.S. leader might be.

“The Grudge” sequel is cursed by mediocrity

Robert Reich: The big picture on the impeachment trial