It is so interesting the way the BBC documentary on sex for marks in some African universities has turned many Nigerians into anti-sexual harassment campaigners of some sorts. Suddenly, almost everybody had something to say, either to condemn or commend those behind the “exposé”.It is important to clarify from the outset that sexual harassment either in school or anywhere is wrong and perpetrators must be adequately exposed and punished. However, the frenzy of excitement that greeted the BBC report is a major source of concern. The manner, in which people were latching on to the documentary for the purpose of getting attention and scoring cheap political point, is worrisome.

Are we saying that we were not aware of this problem in our schools before now? Sexual harassment is pervasive and entrenched not just in our institutions at all levels, but also in workplaces and other segments of the society. We have seen videos of naked lecturers released by their sexually harassed students before. We have heard audio tapes of lecturers soliciting sex from their students. One of them was even sacked at the Obafemi Awolowo University, Ile Ife, last year. A lecturer at the Ekiti State University was caught naked while attempting to have sex with a female student in June this year.

We may not have records of organisations where sexual harassment is prevalent in this country, we know that many chief executives and other superior officers do harass the female folk at work. Many women have terrible tales to tell when it comes to issues of sexual harassment at work. Some have been frustrated while many have abandoned thriving careers because of predators. In fact, some of us won’t even be surprised if it turns out that many of the men condemning sexual harassment on social media today are themselves predators.

Notwithstanding the hypocrisy that could be behind reactions to the BBC documentary, the report has once again brought to the fore the problem of sexual harassment and assaults on our campuses. To say that lecturers demand sex for marks is just an aspect of the problem. There are many brilliant ladies in our higher institutions today that are being sexually harassed simply for refusing to give in to their lecturers’ sexual demands. These girls are not looking for marks. They have what it takes to pass their courses, just that the lecturers won’t allow them to score high marks. They mark them down as a punishment for refusing to be sexually molested by them. I know this because I was once a victim. I have shared my experience as an undergraduate at UNILAG in one of the past editions of this column.

For the record, this is not the first time that lecturers in the University of Lagos would be indicted in a case of sexual harassment. Some of us could still remember the story of an innocent teenager that was reportedly defiled by a lecturer within the walls of the university community three years ago. What happened after? The university simply disowned the lecturer and moved on. I won’t be surprised if all the reactions to the latest story are just because the report was carried by BBC. The university authorities have so far suspended the lecturers involved and set up a committee to investigate them. This is commendable. At least the institution’s reaction this time around is better than its stance on the same issue in 2015.

The truth is, as students, many of us were harassed by lecturers that exercised academic control over us. Unfortunately, there were no official channels of reporting them. There was no social media, so we just suffered in silence. At the same time, there were and still many decent, fantastic and disciplined lecturers in our higher institutions even now. We must be careful not to allow the few bad eggs becloud our judgment of the decent ones.

The good news now is that the social media have democratised information. Anyone can tell their stories. As long as there are incontrovertible evidences, people are bound to believe the stories. Not only that, advancement in technology has made it possible for people to use hidden devices to catch randy men in their acts. No lady should be deceived. There are many male predators out there. Women should arm themselves for the battle ahead and use the social media to their utmost advantage.

Take it or leave it, there is sexual harassment everywhere. There is sex for roles in Nollywood, sex for promotion in workplaces, sex for contract, sex for political appointment, and many more.  Some people even have this warped idea that for any woman to reach the top in her career, she must have sexual affair with them if they are in positions of authority. Of course, there are women that believe in using what they have to get what they want. There are also female students that seduce their lecturers. That however, is no justification for tormenting innocent women either for grades, promotion or roles as the case may be. People should be disciplined enough to resist temptation, especially one coming from their students or subordinates. In any case, sexual harassment policy is not usually gender based. Anybody can be harassed, be they men or women, hence the importance of having an avenue to seek redress when harassed.

As noted earlier in one of the past editions of this column, sexual harassment is not peculiar to Nigerian institutions. It is a well-established phenomenon globally. It happens even in well-established universities all over the world, including the United Kingdom, home of the BBC. A survey by the Telegraph in the UK once found that one in three female undergraduates had some experience of sexual assault while on campus. Similarly, a survey of 2,126 students of Cambridge University by the Women’s campaign some years back found that more than three quarters of the students had experienced harassment while 30 per cent said they had been sexually assaulted. At Egerton University in Kenya, at least two female students reportedly drop out of school yearly due to the problem of sexual harassment.

It’s just that institutions in the developed countries take pragmatic steps to solve the problem. In contrast, African higher institutions live in denial. Schools should formulate policies that will ensure that students are well protected. How many higher institutions in Nigeria, for example, have official points of contacts for complaints in cases of sexual harassment or assault? Students should know where to go to for help when they are harassed by randy lecturers. Do universities here provide names, emails or phone numbers of people that students could contact when in trouble? We know how real the problem of victimisation is in our higher institutions. This is the more reason why victims of sexual harassment should be assured of their protection and freedom from victimisation.

Both Harvard and Cambridge have well documented policies on sexual harassment. It is considered a serious offence in these institutions. Everybody is well-protected – both the lecturers and the students. Apart from their well-articulated policies, they also provide counselling services for traumatised victims. Despite these provisions, students are still complaining and asking for better policies. They want the universities to review their working  documents  in conformity  with the latest dynamics of the problem. Many of them believe their institutions’ policies on sexual harassment is out-of-date.

Nigerian higher institutions should emulate these institutions. It is high time they formulated   policies and procedures for responding to cases of sexual harassment. They should establish formal channels of communication where students can report cases of harassment. It is not enough to suspend erring lecturers once in a while as a response to public outcry on the malady; there should be a system in place to curb the activities of predators and provide a conducive environment for everyone to study without any form of harassment or sexual assault.

Olabisi Deji-Folutile is a member of the Nigerian Guild of Editors. Email: [email protected]

Anti-Graft War: Why we need guidelines on plea bargaining ―Malami 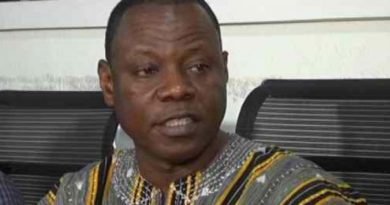