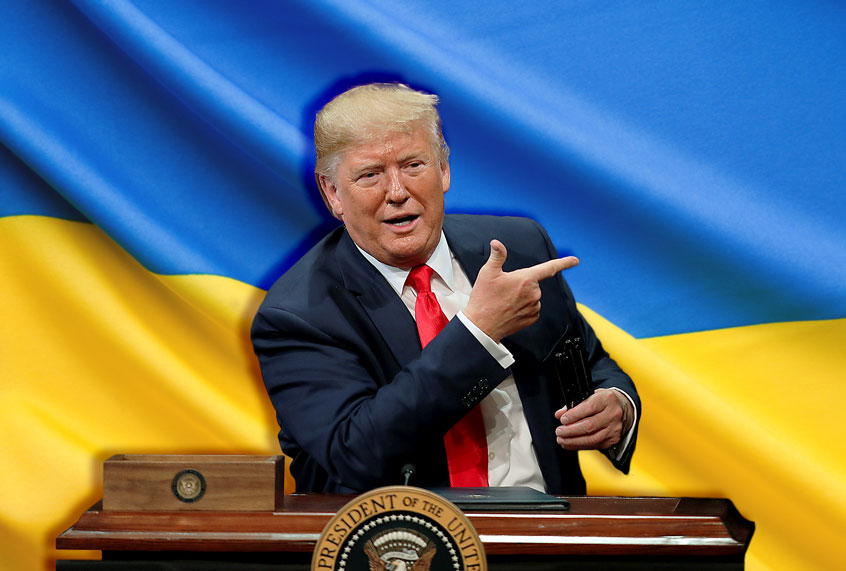 As the impeachment inquiry against President Trump ramps up, some conservatives have begun to argue that while the president’s pressure campaign on Ukraine was wrong — and perhaps even illegal — impeaching him for it would be bad for America.

Daily Caller co-founders Tucker Carlson and Neil Patel argued Thursday that Democrats moving to impeach President Donald Trump were attempting to reverse the decision of the voters in the 2016 presidential election.

After admitting that Trump’s phone call with Ukrainian President Volodomyr Zelensky was “pretty over-the-top,” Carlson and Patel argue that the call does not rise to the level of an impeachable offense. They claim that Trump offered no specific quid pro quo to Zelensky, and did not say that American support for Ukraine would be predicated on an investigation of Joe Biden. Then they moved on to the highly debatable claim that the Justice Department has already determined that Trump’s call was not illegal.

Despite their argument, it’s not yet clear whether Trump’s sudden withholding of $391 million in allocated military aid to Ukraine was specifically linked to his request that Zelensky order an investigation of Biden. On Monday, House Democrats subpoenaed the Pentagon and the Office of Management and Budget to learn about “the reasons behind the White House’s decision to withhold critical military assistance to Ukraine that was appropriated by Congress to counter Russian aggression.”

Carlson and Patel go on to write that impeachment is an “extreme and anti-democratic remedy,” which would ignore the will of the voters from the 2016 election. Then they issued a warning: “You don’t have to be an especially deep thinker to realize this is a recipe for social upheaval.”

Carlson and Patel claim that the only way for an impeachment process to be legitimate is it if is bipartisan, quoting a speech delivered by Biden when he was a U.S. senator from Delaware during the impeachment of President Bill Clinton in 1998. They then suggest that the original whistleblower may have had partisan motivations, because he or she reached out to House Intelligence Committee chair Adam Schiff, D-Calif., “the Democrats’ lead on impeachment,” before filing an official complaint.

Patrick Boland, a spokesman for Schiff, has told the New York Times that “like other whistle-blowers have done before and since under Republican and Democratic-controlled committees, the whistle-blower contacted the committee for guidance on how to report possible wrongdoing within the jurisdiction of the intelligence community.” By this account, while Schiff knew about the general outlines of the complaint prior to its submission, there is no indication that he knew the specifics.

“None of this means Schiff should be removed from office, but by the standards he’s setting, he certainly could be,” Carlson and Patel write. They conclude that those who oppose Trump’s presidency should allow the 2020 presidential election to determine his future, concluding that “there’s no need to come up with thin excuses for a purely partisan impeachment process when we have an election right around the corner.”

Carlson has emerged as one of Trump’s most outspoken defenders as the Ukraine scandal has unfolded. Last month he criticized Judge Andrew Napolitano, a Fox News contributor, for saying that Trump’s own description of his phone call with Zelensky admitted to it being a crime.

“When you dress up news coverage — when you dress up, rather, partisanship as news coverage and pretend that, you know, your angry political opinions are news, you know, people tune out,” Carlson said. He also described himself as being “not partisan” in his own coverage of events. Earlier this year, Carlson told Salon that he believed his program was not overly focused on Trump.

“I really try to be like the one place where we don’t have to talk about Trump for an hour,” Carlson said in that interview. “Not because it’s like some political decision I’ve made — it’s not— but because I just don’t think it’s that interesting.”

Conservative columnist Jonah Goldberg appeared on NPR on Monday morning and, like Carlson and Patel, said he did not believe Trump should be impeached with an election coming up so soon.

“I think it was terrible,” Goldberg said when asked whether Trump’s conduct was impeachable. “And to be fair, it’s not so much that I don’t think he should be impeached. I think it is a prudential question about whether or not it is worth putting the country through this when an election is so close.”

After adding that Trump has done many things that are “eminently impeachable,” Goldberg said he did not believe it was worth pursuing impeachment when there was little prospect of convicting Trump in the Senate. (It takes 67 votes to convict, meaning that at least 20 Republican senators would have to join the 45 Democrats and two independents.) He also said that, if he were a Democrat, he would not want to impeach the president only to see him get acquitted by the Senate and claim vindication. This same argument was used by House Speaker Nancy Pelosi and many other Democratic impeachment skeptics — at least until the Ukraine scandal hit the headlines.

Trump declares himself “ally to all peaceful protesters,” threatens to crush them with troops

I grew up in an underground cannabis bakery during the AIDS epidemic. Yes, it is essential medicine

Listen to article Improved maternal health is an important prerequisite for women’s advancement, yet due to low access and utilization