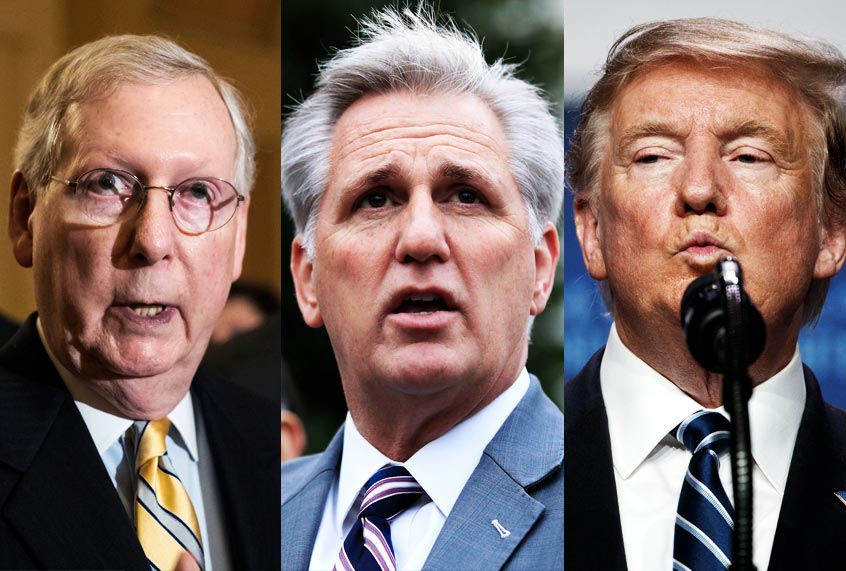 At the end of the first week of Donald Trump’s impeachment inquiry, the president finds himself without a corroborated factual defense against allegations of corruption. Yet he has the consensus support of virtually the entire Republican caucus on Capitol Hill. Rather than back away from a president whose crimes are revealed at a near-hourly rate, Republicans in Congress have now pledged to aid in the White House’s propaganda campaign meant to slow-walk the impeachment inquiry.

After screaming “NO COLLUSION!” for the last three years, Trump flatly asserted on Thursday that he has “an absolute right” to ask a foreign government to investigate his political rival. Further attempting to normalize his impropriety, the president turned to the television cameras gathered on the South Lawn of the White House lawn and asked the government of China for help in investigating Joe Biden, a potential political rival, as he had admittedly already done.

Late Thursday brought yet another test to Republicans’ resolve when Democrats on the House Intelligence Committee released text messages between U.S. diplomats and a senior Ukrainian aide that show how a potential Ukrainian investigation into Joe Biden and the 2016 election was linked to a possible meeting between Ukrainian President Volodymyr Zelensky and Trump, which authorities in Kyiv badly wanted.

Although the evidence is unambiguous, Trump seems to believe that enough Americans see nothing wrong with using public funds to pressure foreign leaders to investigate political rivals.

He just has to tweet “NO QUID PRO QUO!” enough times. After all, he hasn’t lost the support of one Republican in Congress, with perhaps the ambiguous exception of Sen. Mitt Romney of Utah, the last non-Trump Republican presidential nominee. Everyone else seems to have realized that he really is above the law, and as long as they stick with him, so are they. It is increasingly clear with every passing hour that they will never abandon their man.

As Rep. Lee Zeldin, R-N.Y., suggested after hours of testimony and pages of communications were provided by Kurt Volker, the former U.S. special representative for Ukraine, “the administration is an even stronger place today than they were this morning.”

They also kicked off a weekly briefing session this week to keep Republicans on-message with the White House. The Trump administration is now reportedly arguing that it’s not compelled to provide documents in the impeachment inquiry unless a formal vote is held by the full House.

“The president has confessed his violation of his oath of office so we don’t need too much inquiry,” Speaker Nancy Pelosi noted on Thursday.

Trump has essentially made it open season for foreign governments to help him get re-elected. The silence of the vast majority of Republicans is deafening. “Your silence,” as constituent Amy Haskin told Sen. Joni Ernst, R-Iowa, this week, “supports him.” Ernst is up for re-election next year in a purple state that Trump won in 2016 but that Barack Obama carried twice, and where Trump’s approval rate has gone deep underwater.

So far Romney is the only Senate Republican to voice concern on the record about the president’s alleged actions, tweeting that if Trump “asked or pressured Ukraine’s president to investigate his political rival, either directly or through his personal attorney, it would be troubling in the extreme.”

Sen. Ron Johnson of Wisconsin, a Republican who plans to retire in 2022, said on Thursday that there was nothing improper about Trump’s call on Chinese officials to investigate Biden. A year before, Johnson had said that “any foreign interference in our elections is unacceptable.”

Senate and House Republicans are standing by their man because they sense that if they abandon Trump, they won’t win another national election in a generation. As Peter Beinart wrote: “For many Republicans, Trump remains uncorrupt — indeed, anticorrupt — because what they fear most isn’t the corruption of American law; it’s the corruption of America’s traditional identity.”

But as Trump grows ever more emboldened in his lawlessness, he may well damage the egos of at least some prominent Republicans who pride themselves on portraying a personal brand that embodies fidelity to the law.

“Hold up: Americans don’t look to Chinese commies for the truth,” said Sen. Ben Sasse of Nebraska in a recent written statement. “If the Biden kid broke laws by selling his name to Beijing, that’s a matter for American courts, not communist tyrants running torture camps.” The president has recently lavished praise on Sasse, a onetime Never-Trumper. Democrats would be wise to force embattled Senate Republicans up for re-election next year — a list that includes Sasse, Ernst, Susan Collins of Maine and Cory Gardner of Colorado — to keep on defending Trump as his words and deeds keep getting more blatant.

Wisconsin proves GOP’s war on voting is about ending democracy, not just winning

Hon. Kofi Adams, the Member of Parliament for Buem has on Friday 30th April 2021 donated over one hundred bags