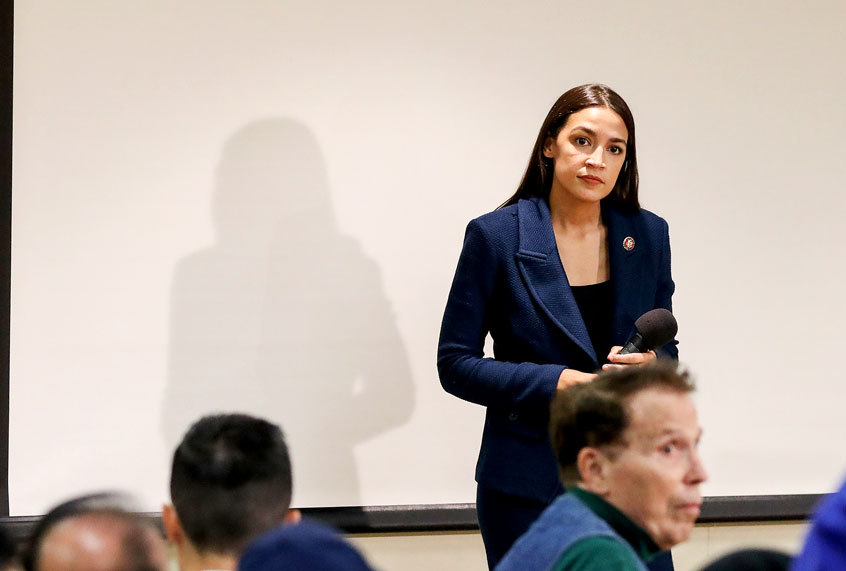 A woman who ranted about “eating babies” to solve climate change at a town hall with Rep. Alexandria Ocasio-Cortez, D-N.Y., was revealed as a member of a bizarre conspiracy group, according to the group itself.

During a town hall event at a public library in Queens, a woman stood up and began to yell about climate change.

“We only have a few months left. … Your next campaign slogan should be this: we have to start eating babies,” the woman said, before removing her jacket to show off her T-shirt saying “Save the Planet. Eat the Children.”

“We don’t have enough time,” the woman said. “Even if we would bomb Russia, we still have too many people, too much pollution, so we have to get rid of the babies. Just stopping having babies is not enough, we need to eat the babies.”

Several people approached the woman to urge her to take her seat as Ocasio-Cortez attempted to reason with her.

“Luckily, we have more than a few months,” she said, adding that there are many solutions to the climate crisis that are “positive.”

As Ocasio-Cortez tried to move to the next question, the woman continued to try to speak to the congresswoman and was escorted from the event.

The video of the incident was circulated among conservative circles and amplified by President Trump and his son, Donald Jr.

“Seems like a normal AOC supporter to me,” Don Jr. wrote, before his father retweeted his post and added, “AOC is a Wack Job!”

Ocasio-Cortez initially urged her supporters not to mock the woman, writing on Twitter that she was “concerned there was a woman in crisis” and wanted to “ensure we treat the situation compassionately.”

“Let’s not mock or make a spectacle,” she wrote, adding that the woman “may have been suffering from a mental condition and it’s not okay that the right-wing is mocking her and potentially make her condition or crisis worse.”

“Be a decent human being and knock it off,” she wrote.

But it turned out the woman was no AOC supporter at all. Instead, a Twitter account belonging to the LaRouche PAC took credit for the stunt.

Matthew Sweet, whose book “Operation Chaos” detailed the group founded by infamous conspiracy theorist Lyndon LaRouche Jr., told The Washington Post that LaRouche’s followers have “been doing this since the ’70s.” Sweet described the group as a “bizarre political cult.”

Interrupting speakers is a “fairly well-established tactic for them,” he explained. “The tactic is you go to a political meeting and you create a disturbance that disrupts the meeting, and more importantly, that creates a kind of chaos.”

LaRouche himself died earlier this year at 96. He had run for president eight times between 1976 and 2004. He had “built a worldwide following based on conspiracy theories, economic doom, anti-Semitism, homophobia and racism,” The Washington Post reported after his death. Though LaRouche’s early views were more aligned with the left, his ideology later became “ultraconservative and apocalyptic,” according to the Post. Prior to his death, the group expressed support for Trump.

Sweet recalled that the group’s “tiny” membership frequently heckled speakers like former Secretary of State Henry Kissinger and actress and activist Jane Fonda in years past. The AOC town hall is “the kind of noise and chaos that they have always delighted in,” Sweet told the Post.

“It was us,” the group wrote on Twitter after the stunt.

Ocasio-Cortez tweeted that it “turns out the woman yelling was a Trump supporter.”

Sweet added that the fact that the woman was quickly identified as a member of a pro-Trump group will not stop Ocasio-Cortez’s opponents from using the clip to try to smear her.

“Enemies of AOC are going to use this against her and they don’t care who this woman was,” he said. “The noise that they’ve made is going to drown out their part in the process.”

The secret ingredient in this salsa is peanut butter — or is it?

For Trump and his man-baby fans, “free speech” means they get to act out with no consequences

A three-member delegation from the International Justice Mission (IJM), led by Will Lanthrop, country director, on Thursday, 18 February 2021,

Food For All Africa partner with FoodBank Borough Philanthropy