Vice President Yemi Osinabjo is asking the leadership of the Trade
Union Congress to give his principal, President Muhammadu Buhari, the
benefit of the doubt regarding the ongoing negotiation of the new
minimum wage.

Osinbajo said Buhari‘s administration would resolve labour’s request
for a salary increase to other levels of workers in a transparent and
honest manner.

Osinbajo’s spokesman, Laolu Akande, in a statement on Thursday said
the vice-president passed the message at a meeting with the TUC
leadership.

Osinbajo said, “Your coming today indicates your willingness to work
with the government; you should consider the president as someone
committed to the welfare of workers.

“One of the first things he did when we came in was to give states a
series of bailouts to help repay backlog of salaries in several
States.”

He added, “Let us give ourselves room to negotiate properly; the
president wants an honest, open process, we will be transparent and
honest about it. labour leaders should give us the benefit of the
doubt.” 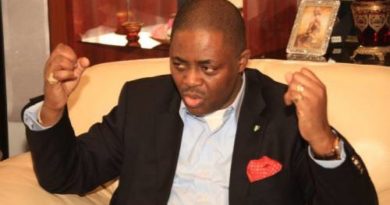 Lai Mohammed has been allegedly accused of being a thief after cornering hundreds of millions of naira donated to the governorship campaign of AbdulRahman AbdulRazaq.

“I came back two days later and remembered, and I said they should call him and give him an account number. When we called, he said Lai had sorted it out. That one and several. Until today, as we speak, he never told anybody that he collected money.

“There’s a businessman from the South-east. His banker came to me and said his Oga wants to speak with me. I spoke with him and he said he was sending money to me. I said, thank you very much. After the election, he called me to congratulate me.

“When he saw I was just saying ‘thank you’, then he asked if Lai didn’t deliver the money, I asked him what money? He said N100 million,” Mr AbdulRazaq told ThisDay in an interview out on Sunday.