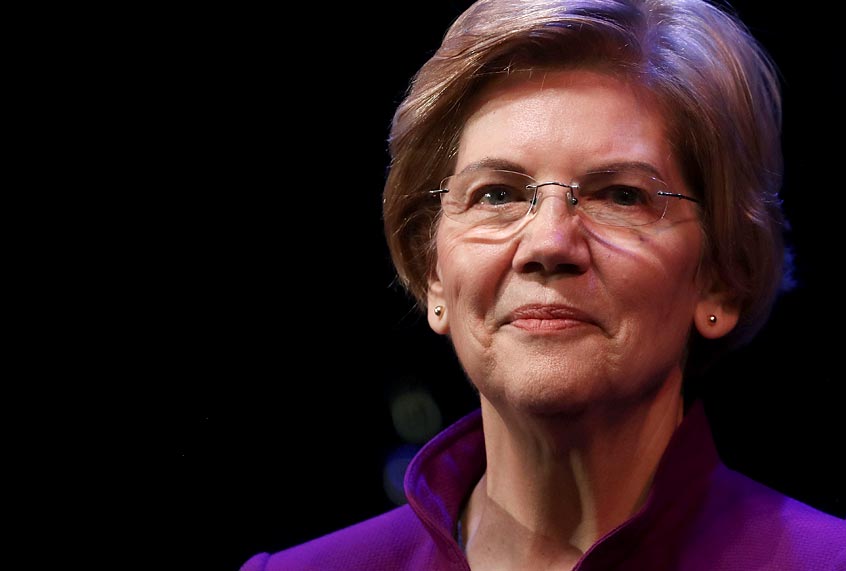 Sen. Elizabeth Warren’s presidential campaign announced Friday that it raked in $24.6 million in the third quarter and has $25.7 million cash on hand, further solidifying the Massachusetts Democrat’s place at or near the top of the Democratic primary field in both polling and fundraising.

The eye-popping total tops Warren’s second quarter haul of $19.1 million and is more than quadruple the $6 million her campaign brought in during the first three months of the year. She is outpaced only by fellow progressive Vermont Sen. Bernie Sanders, who so far leads the pack with $25.3 million.

“Elizabeth didn’t sell her time to wealthy donors, over the phone or in person at closed-door fundraisers. She didn’t take money from Washington lobbyists,  corporate PACs or PACs of any kind,” Warren’s campaign manager, Roger Lau, wrote in an email to supporters Friday as he revealed the fundraising numbers.

“Instead, she got to spend her time traveling across the country, hosting town halls, taking tens of thousands of selfies and hearing directly from people about what’s on their minds — and people chipped in to help make it possible,” he added.

Warren’s massive fundraising haul comes as she has surged to the top of many early-state and national polls after a relatively slow start, besting both Biden and Sanders in some recent surveys.

Lau noted Warren added more than 300,000 new donors in the third quarter. The campaign received 940,000 contributions between July and September from more than 500,000 people, he added. The average donation size for the third quarter was $26.

The campaign plans to spend the money on grassroots outreach, “ground game” and a recently announced $10 million-plus ad buy across television and digital in early-voting states, Lau said in his email to supports.

“Celebrate. Say ‘woo-hoo!’ (quietly, if you need to, depending on where you’re reading this),” Lau said in the email. “Close your eyes and picture Wall Street bankers scowling into their catered breakfast.”

Candidates must file reports with the Federal Election Commission detailing their third-quarter fundraising and spending figures by Oct. 15.

Dr. Drew is worried about the “impact of pornography” and reveals his COVID-19 fears

The prosperity gospel is based on the lie that you can get everything you want from the world by following God.
ITS A LIE STOP IT! ... See MoreSee Less

What Bible says? Not what the preacher says. People need to buy their copy of the holy Bible and be used to it. Build your own relationship with God through His son Jesus Christ.

say wat u kno nd leav wat doesn't concern u at all.bcos in dis area, is obvious dat u kno not one tin about it..