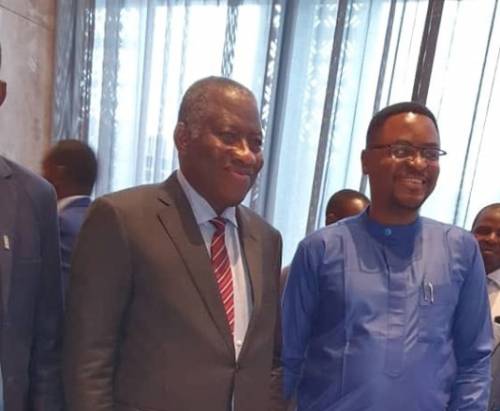 It is 9:10am and former President Goodluck Jonathan arrives at the mouth of the aircraft at Nnamdi Azikiwe International Airport, Abuja. His hat gives him away too soon as he saunters into the waiting metal bird. I cast a piercing glimpse at him, and said to myself, “that was once the most powerful man in Africa, and perhaps, the most misunderstood”.

We then journeyed on the wings of the bird from Abuja through Abidjan to Niamey.

I was an irrepressible critic of Jonathan, yes, and I exercised this right as a citizen of Nigeria maximally under him. I was not arrested, detained or had minatory messages sent to me by his supporters or agents. I was not afraid to speak up or “wail”. Other critics, including those who called for protests or even revolution during his administration were not hounded and dispatched to court for trial on farcical charges of treason. I enjoyed freedom.

However, under President Buhari, I cannot exercise my rights to freedom of expression, thought and opinion without the nagging fear of arrest, and the paranoia of secret service agents waiting for me at the airport for being a loud mouth or for wearing a banned T-shirt – since the Department of State Services is now a fashion police.

Although President Jonathan had his challenges and failings; he is an exceptional gentleman and a democrat. He brooked opposition and harboured no political prisoner.

For two days, I have listened to him speak at the Constitutional Term Limits Summit taking place in Niamey, Niger Republic, where I am a participant. So far, he has exuded brilliance, keenness of mind, understanding of the issues and their corollaries.

Really, I have always wondered why he is tepid about national issues unlike some past leaders of the country; so I asked him the reason for his taciturnity.

He said, “Let me thank you for asking me that question. That means you want to hear my voice, otherwise you would not have asked why I have been a bit silent on national issues.

“I may not be 100 per cent right. I believe a former president has to be careful in commenting on national issues; otherwise you become a nuisance to society.

“Because having being the president of the country for a period of time, there is a number of information available to you; you do not always expect a sitting president to do things exactly the way you did, and sometimes, when you try to comment on national issues, of course, there are people that will defend the president, sometimes, they leave the subject matter and begin to castigate some aspects of your administration they observed weaknesses in, in order to divert the attention of the general public from the issue.

“Yes, former presidents should make comments from time to time on national issues but it should be issues that are quite critical; issues you think you will not be able to reach out to the president; if you reach the president and have conversations with him, you do not need to go to the media and discuss the issues otherwise you will create more problems in your country.

“In Nigeria, we have this platform; the council of state that former presidents belong to, it could be a good platform to discuss issues.

“I do not advise that a former president should be active in political commentary; it will create more problems than solving the problem.”

Also, I had asked him if he regretted conceding to President Buhari. My interrogation was to test for little annoyances. But it turned out negative. He appeared assured in the decision he made to accept defeat.

He said, “I always say that if you want to take a public office, you should be ready to make personal sacrifices.

“If you are not ready to help people, then you have no business going into politics.

“I have no regret up to this time, no matter the circumstances; I have no regret because what I did will continue to shape political discussions, not only in Nigeria but across the continent.

“Some people may not appreciate it, but as we continue to strengthen democracy, people will begin to look at conducts that are acceptable and some that are not.

“If the little contribution I have made will help to improve our democracy in the country and on the continent, yes, I will do the same thing again.”

But really, why do succeeding governments in Nigeria become so parlous that previous ones are looked upon in nostalgia?

Christmas: COVID-19 pandemic alters lifestyle of Nigerians in US — Official