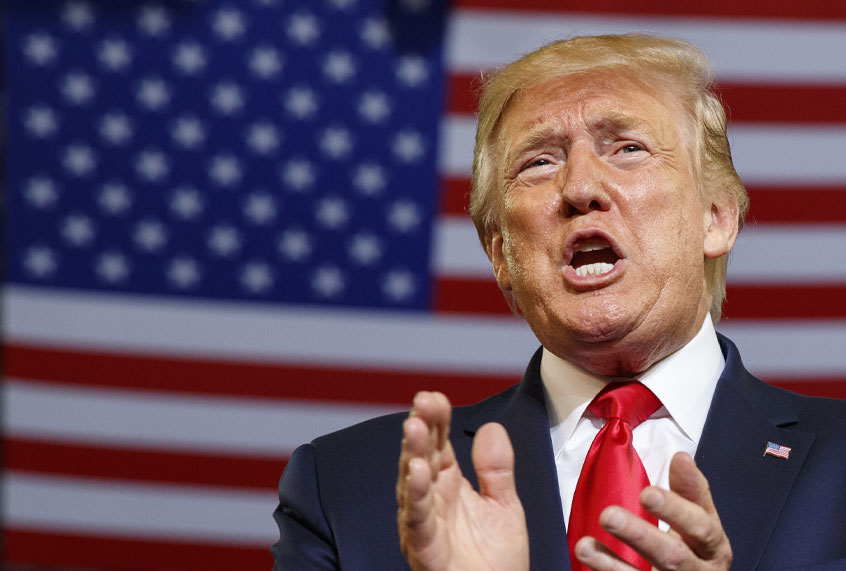 The launching of an “official impeachment inquiry” into President Donald Trump’s conduct has sailed America into largely uncharted waters.

While there have been demands for the impeachment of many presidents, just three previous ones — Andrew Johnson, Richard Nixon and Bill Clinton — have faced formal impeachment inquiries, and the Senate convicted none of them. None of those three sought reelection.

After Johnson’s acquittal, he was denied his party’s presidential nomination. Nixon and Clinton were in their second terms already and could not run for reelection.

Trump, however, is already doing so.

As a scholar of American legal and political history, I have studied the precedents for dealing with this strange conundrum. A little-known wrinkle in the Constitution might allow Trump to be reelected president in 2020 even if he is removed from office through the impeachment process.

At the time the Constitution was ratified in 1788, many of its authors regarded impeachment as an improvement over the violent methods often used in Europe to get rid of corrupt rulers. Nonetheless, they recognized the dangers that impeachment would always present.

As if commenting on the current moment, Alexander Hamilton noted in 1788, that it will “agitate the passions of the whole community, and … divide it into parties more or less friendly or inimical to the accused. In many cases, it will connect itself with preexisting factions and will enlist all their animosities, partialities, influence, and interest on one side or the other.”

The Founders were careful about defining and regulating this dangerous power. They gave the House of Representatives “the sole Power of Impeachment,” and specified that the Senate “shall have the sole Power to try all Impeachments,” with a two-thirds majority required for conviction. They specifically prevented the president’s pardon power from reversing impeachments.

They also limited the possible punishments that the Senate may impose to “removal from Office, and disqualification to hold and enjoy any Office of honor, Trust or Profit under the United States.” But they only required that an impeached and convicted official “be removed from office” — but did not mandate that the person also be disqualified from holding a future office.

Nowhere does the Constitution define the standards for disqualification. Moreover, the Senate has declined to establish a standard.

But, as Ohio State University law professor William Foley points out, Senate procedures require separate votes to convict someone of an impeachable offense and to impose a disqualification penalty.

So even if President Trump were impeached and convicted, there is the possibility that he could be reelected to the same office from which he had been removed.

Of the 17 historic impeachment proceedings brought against judges and other officials who rank lower than president, 14 went to trial in the Senate and eight resulted in a guilty verdict.

In only three of those cases did the Senate bar — or “disqualify” — those who were convicted from holding office in the future.

First was West H. Humphreys, a federal district judge from Tennessee at the start of the Civil War, who refused to hold court and announced his support for the Confederacy. He was impeached and disqualified on charges of neglecting his judicial duties and waging war against the government of the United States.

In 1913, Robert W. Archbald, an associate judge of the United States Commerce Court, was convicted of the more prosaic offense of doing business with litigants before his court, and forever barred from holding office. The Senate found that he “willfully, unlawfully, and corruptly took advantage of his official position.”

The third instance of removal and disqualification occurred in 2010. In that case, Congressman Adam Schiff, now one of the key players in the Trump impeachment hearings, took the lead in prosecuting Judge G. Thomas Porteous Jr. of Louisiana. Porteous was found guilty of receiving cash from lawyers who had dealings in his court, of fraudulent dealings with creditors and of misleading the Senate during his confirmation proceedings.

History also reveals one curious instance of impeachment without disqualification, in which the person convicted ran for and won another office. Federal district judge Alcee Hastings of Florida was removed from office in 1989 for perjury and conspiring to solicit a bribe. Since 1993, he has been representing a Florida district in the U.S. House of Representatives.

Other people charged with perjury and bribery, as well as crimes like tax evasion, also have been convicted but not disqualified. In the end, it’s hard to say what distinguishes those cases from the others.

Professor Foley writes that if President Trump is impeached and convicted, the Senate should follow the Hastings precedent and not prevent him from running again for office. In Foley’s view, the American electorate should “decide whether Trump, despite his attempt to subvert the system, should have another chance.”

Given the timing of an impeachment vote in the House and a Senate trial, a verdict could be rendered with the 2020 general election campaign in full swing, or even between Election Day and inauguration. This would create serious doubt and deep division about whether a president removed from office could legitimately take the oath of office again. Such a result might, as the president himself tweeted, “cause a Civil War like fracture in this Nation from which our Country will never heal.”

To avoid that severe a split, uphold the Founders’ view of impeachment and minimize the perils of division that they feared, the Senate should, if the president is convicted, heed Alexander Hamilton’s advice and disqualify him too, ensuring that impeachment and removal from office results in “a perpetual ostracism from the esteem and confidence and honors and emoluments of … (this) country.”

Why I’m sick of “woke” culture

October 16this UN World Food Day and to commemorate, Food for All Africa provided over 500 packs of waakye meal,