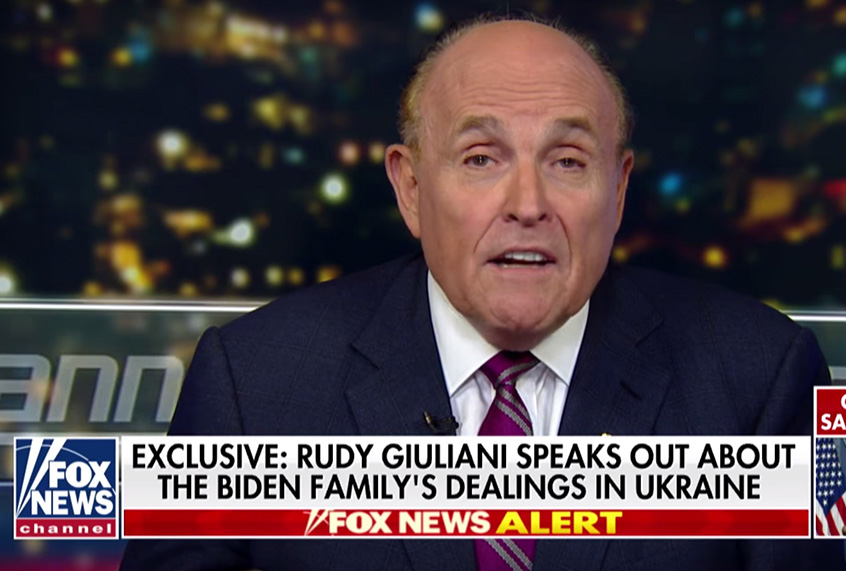 Hours after he was subpoenaed by House Democrats for documents and records related to his dealings with Ukraine, Rudy Giuliani appeared on Fox News to defend his work, which has taken center stage in the impeachment proceedings against President Donald Trump.

In an interview with host Sean Hannity, Giuliani, who serves as the president’s personal attorney, attempted to distance himself from the political fallout surrounding Trump’s July 25 call with Ukrainian President Volodymyr Zelensky.

He appeared to question the motives behind recent subpoenas while defending his communications with officials in the Eastern European nation that involved digging up dirt on former vice president Joe Biden, who has been one of the top Democrats vying to take on Trump in 2020. The subpoena issued to Giuliani are part of an investigation by the House Intelligence committee into Trump’s dealings with Ukraine.

Giuliani also reminded viewers that he was a professional lawyer as he promoted unsubstantiated allegations about the Biden family; Trump’s 2016 political opponent, Hillary Clinton; and former President Barack Obama.

“I don’t have any experience in a courtroom, and I get nervous public speaking. These people are such intellectual heavyweights, I don’t know if I could handle Schiff,” Giuliani said Monday, in an apparent effort to mock Rep. Adam Schiff, D-Calif., the chairman of the House Intelligence Committee.

“Wake up, Democrats. You are covering up corruption,” he continued. “And by the time this is over, you’re going to be the party of corruption.”

Giuliani did not mention whether he plans to comply with the subpoenas, though Hannity asked him if he would be interested in speaking to Congress. Giuliani told ABC News anchor George  Stephanopoulos on Sunday that he would consider cooperating with Adam Schiff, who chairs the Intelligence panel with Trump’s approval.

“Will you testify?” Hannity asked. “Because I think [Trump lawyer] Jay Sekulow is absolutely right. You don’t have to do anything.”

“I don’t know,” Giuliani answered. “I’m weighing the alternatives. I’ll get all my evidence together. I’ll gather my charts.”

Giuliani went on to say he could be moved to testify if Congress would allow him to use audio and video evidence he claims he has collected over the course of his dealings with Ukraine.

“I don’t know — if they let me use videotapes and tape recordings that I have, if they let me get some of the evidence that I gathered,” Giuliani said.

Earlier in the interview, Giuliani noted that lawmakers “seem to forget that I’m a lawyer. If I were defending a terrorist, they’d be going crazy that I was called before a committee.”

Giuliani was given until Oct. 15 to comply with the subpoena, although he has already questioned its “legitimacy” in a tweet.

Giuliani has been investigating unsubstantiated allegations of corruption against Biden. He told Hannity it is “nonsense” that he is being accused of election interference.

In recent days, he has dismissed allegations that he attempted to help Trump solicit Ukraine to interfere in the 2020 presidential election — an action that is center to the July 25 phone call between Trump and Zelensky.

During that phone conversation, Trump repeatedly pressured the president of Ukraine to “initiate or continue an investigation” into Hunter Biden, the son of the former vice president, who served on the board of a Ukrainian energy company for five years. Giuliani and Attorney General William Barr have been called Trump’s “personal envoys” on those matters.

A memo of the call between Trump and Zelensky released last week by the White House reveals Trump asked Zelensky for a “favor” shortly after Zelensky  raised the prospect of obtaining military equipment from the U.S.

Trump has publicly acknowledged that he asked Zelensky to investigate Hunter Biden, who served on the board of a Ukrainian energy company that came under scrutiny for possible abuse of power and unlawful enrichment. Hunter Biden was not accused of any wrongdoing in the investigation, but anti-corruption advocates expressed concern that he served at the company at the time his father was the Obama administration’s point person on relations with Ukraine.

As vice president, Joe Biden reportedly pressured Ukraine to fire its top prosecutor, Viktor Shokin, who Biden and other Western officials have argued was ignoring corruption in his own office and among the political elite. In 2016, Biden reportedly threatened to withhold $1 billion in loan guarantees unless the nation’s leaders removed Shokin. There is no evidence that Joe Biden misused his authority.

Trump and Giuliani, however, have pointed to the event as a major scandal, though no evidence has emerged that either Biden committed any wrongdoing.

Giuliani has emerged as a central figure related to Trump’s alleged effort to urge Ukraine to procure dirt on Biden in order to boost his own re-election campaign. Democrats have called that effort an unprecedented quid pro quo for political dirt.

Giuliani is mentioned multiple times in a formal whistleblower complaint, released last week, about the call. He has admitted in television interviews that he connected with Ukrainian officials, but he has claimed that he did so at the direction of the State Department — a claim which the agency has refuted. Trump has also denied any wrongdoing and moved to discredit the unnamed whistleblower.

Secretary of State Mike Pompeo has also been issued a subpoena by House Democrats.

The right wanted to destroy the “administrative state”: Coronavirus is why we need it