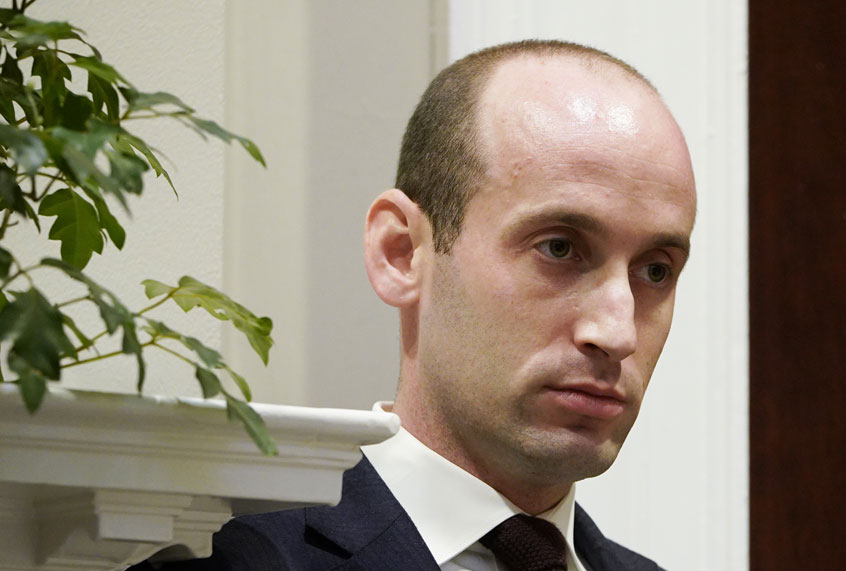 With the Ukraine scandal kicking into full gear last week, Trump’s White House tried to distract its loyal fans into amped-up xenophobia. But this attempt at counterprogramming seems to have fallen flat after a series of federal court decisions struck down major aspects of Trump’s crackdown on both legal and illegal immigration.

After first suspending pending refugee arrivals, leaving many who had already booked their airline tickets to the U.S. stranded, the  administration announced last week it would slash 2020 admissions to the lowest level in the 40-year history of the U.S. refugee program. In the last year of the Obama administration, it was 110,000 refugees. Trump wants to admit just 18,000 in the coming year.

This decline comes at a time when the number of refugees worldwide has reached the highest levels since World War II. There are nearly 71 million displaced people around the world, more than 1.4 million  in urgent need of resettlement.

A U.S. Citizenship and Immigration Services representative who is closely aligned with White House immigration adviser Stephen Miller — the architect of the president’s sweeping crackdown on immigration — has reportedly proposed a virtual shutdown of the refugee program by setting a future cap on admissions to zero.

But even the established cut in the already shrunken refugee program — to 18,000 admissions over the next 12 months — nearly eliminates America’s historic role as a safe haven and goes against the advisement of the Pentagon. This marks a new all-time low, after the previous low of 30,000 was set by the Trump administration last year. Before Trump took office, the U.S. had accepted a yearly average of 95,000 refugees since the resettlement program began in 1980.

Trump also issued an executive order saying his administration would seek the approval of state and local governments to resettle refugees in their communities, effectively allowing those jurisdictions to refuse to accept resettlement. Under U.S. law, the president must consult Congress before finalizing the annual number of refugees, but the determination is ultimately set by the White House.

Under pressure from Congress, 4,000 of the decreased refugee slots will supposedly be reserved for Iraqis who are threatened due to their work with the U.S. government. Only two Iraqi interpreters obtained visas last year. A federal court case revealed last week that 14,000 Iraqi and Afghan interpreters have been waiting for years in dangerous conditions, despite a legal requirement that their cases be decided within nine months. State Department data show that only 1,649 Afghan citizens received visas in 2018, a 60% drop from 2017, and only 51 Iraqis were admitted in 2018, down from 10,000 in 2016.

“We’ll turn them back,” Ken Cuccinelli, the acting director of USCIS, told reporters when asked last week about persecuted Christians from Iraq seeking protection in the U.S. Trump’s new allowance is for just 5,000 visas for those fleeing religious persecution.

This level of senselessness and callousness in a cornerstone of America’s humanitarian policy finally seems to have shaken the a core group of Trump’s bases: evangelical Christians, whose scripture specifically commands to “welcome the refugee.”

Evangelical activist Tony Perkins, president of the conservative Family Research Council, said earlier this month he was “alarmed” that the administration was considering more dramatic reductions in refugee admissions. “We strongly urge the administration to extend its admirable commitment to advancing religious freedom to its refugee resettlement policy,” Perkins said in a statement.

But even as Trump officials weigh dramatically cutting refugee admissions, the administration also seeks to greatly reduce the availability of asylum.

Acting Secretary of Homeland Security Kevin McAleenan announced on Monday that the Trump administration will move to deter “unprecedented flows of migrants crossing our border” by no longer allowing migrant families apprehended at the border to enter the U.S. under the immigration policy commonly known as “catch and release.” Under the new rule, set to go into effect next week, most migrant families applying for asylum will be sent to Mexico while awaiting immigration proceedings. The administration also signed an agreement with El Salvador that would allow some migrant families to apply for asylum there.

As Politico reported earlier this year, administration policies are “making it harder for judges to move cases efficiently, extending processing times and compounding a nationwide backlog that has grown by 68 percent under President Trump.” Average case processing times have jumped by 46% from 2016 to 2018, according to data compiled by the American Immigration Lawyers Association. With the immigration court backlog nearly doubled in the Trump years, some judges are scheduling cases to be heard six years into the future.

“We’ve seen interference with every element of the judge’s role,” Ashley Tabaddor, president of the National Association of Immigration Judges, said of the impact of a new Trump administration decree that judges must complete 700 cases each year to earn a satisfactory performance rating. With many of the changes ordered by Trump’s DOJ, explained Amiena Khan, executive vice president of the judges union, “what they are actually doing is lessening the effectiveness and efficiency of the court.”

A new internal manual produced by USCIS, which was obtained by the International Refugee Assistance Project and shared with ProPublica, advises the use of Google Translate to vet refugees’ social media posts, even though Google specifically advises users that its machine translation service is not “intended to replace human translators.”

The USCIS is also reportedly planning to roll back all references of the term “foreign national” to “alien” in the agency’s policy manual. While that is foremost a troll maneuver meant to openly demonize immigrants, the move follows a 2018 Supreme Court ruling that “detained aliens” may be held indefinitely, while “foreign nationals” have the right to periodic bail or bond hearings.

But while single-minded Stephen Miller, a committed immigration hawk since his high school days, pushes the executive branch to extreme crackdowns, the other two branches of the federal government are pushing back.

Both the Republican-led Senate and Democratic-controlled House voted to terminate Trump’s February declaration of a national emergency on the southern border with Mexico last week, in an effort to block the reallocation of military funds to the wall. And the administration suffered three defeats in federal court within less than 24 hours to end the week. That doesn’t mean, however, that as Trump faces increasing danger with a looming impeachment inquiry his administration won’t keep lashing out at the most vulnerable.

I’m a public defender. I don’t want my elderly client to die in prison from coronavirus