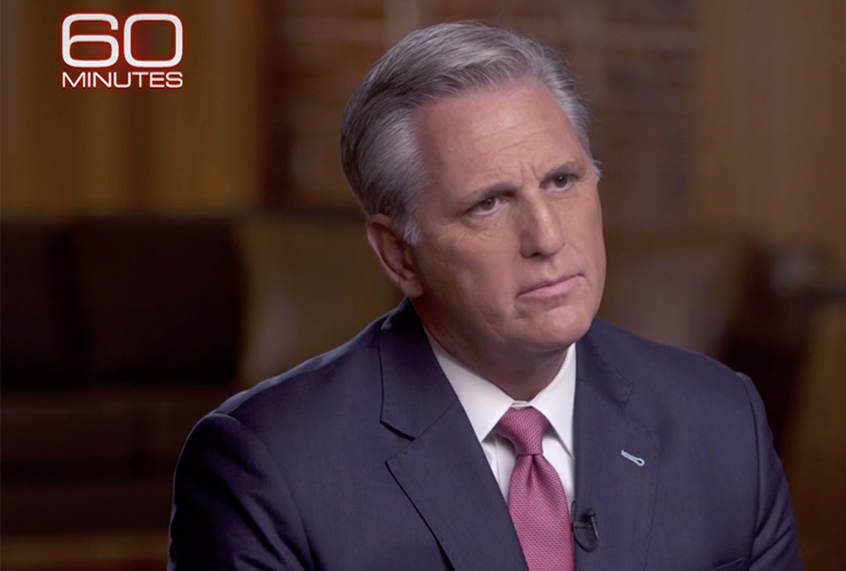 McCarthy, who was previously caught on a hot mic joking that Trump might be paid by Russian President Vladimir Putin, and who admitted that his party’s Benghazi investigation was a political tool aimed at damaging Hillary Clinton’s presidential campaign, was grilled by CBS News reporter Scott Pelley on the partial transcript of Trump’s call released by the White House.

“What do you make of this exchange?” Pelley asked. “President Zelensky says, ‘We are almost ready to buy more Javelins from the United States for defense purposes.’ And President Trump replies, ‘I would like you to do us a favor though.’”

“No, it’s in the transcript,” Pelley replied.

Pelley pointed out that McCarthy was veering into White House talking points.

Pelley also asked McCarthy how he expects “the president’s defense” to roll out.

“Defense of what?” McCarthy incredulously asked.

McCarthy alleged that the impeachment inquiry would never have started if Democrats waited for the call transcript to be released, even though the transcript confirmed that Trump pressed Zelensky to investigate Biden.

Pelley then pressed McCarthy on whether he found it “appropriate” for Trump to press Zelensky “for an investigation of his Democratic rival.”

McCarthy would not say whether it was appropriate, but argued that Trump did not say anything on the call that was “impeachable.”

McCarthy was widely criticized over the interview, including by Rep. Justin Amash of Michigan, who quit the Republican Party earlier this year after calling for an impeachment inquiry following the release of the Mueller report.

Later in the segment, Pelley asked House Speaker Nancy Pelosi about Republican claims that Trump’s phone call was not an impeachable offense. Pelosi pointed out that McCarthy did not mention that Trump had blocked $400 million in military aid to Ukraine just days before the phone call.

“It’s not just what happens in the call. It’s part of the sequencing of events as well,” Pelosi said. “You withdraw a couple hundred million dollars worth of assistance to a country. And then a couple days later, say, ‘By the way, can you help me with my campaign,’ in other words.”

Asked if she had a message for the White House, Pelosi urged the president to “speak the truth.”

“Don’t make this any worse than it already is,” she added.

Should we rally around the president in a time of crisis? Definitely not this one

Inside Parler, the social media platform by and for Trump supporters

Media suddenly shifts its tone on Trump — but that’s not courage, it’s cowardice