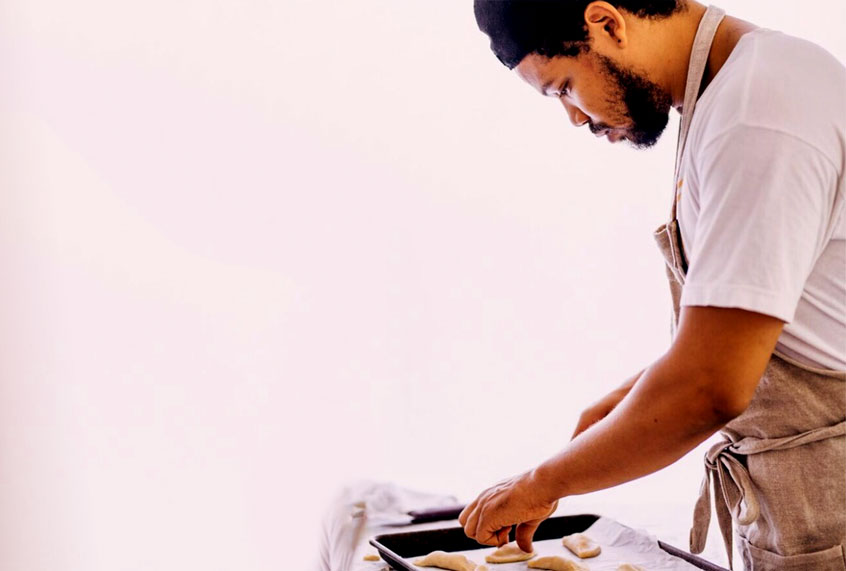 Following the success of his Food Network series “Smollett Eats,” Jake Smollett released his first cookbook in 2018. For “The Family Table: Recipes and Moments From A Nomadic Life,” Jake and his siblings compiled 130 of their favorite family recipes. Each one reiterates Jake’s belief that anyone can enjoy luxury cooking within the comfort of their own home.

Growing up, Jake never ate a family meal on a table that was purchased from a store. Using wood as her material, Jake’s mom would build a new kitchen table every time the family moved into a new home. The New Orleans native also taught her son how to fill the dishes that would complete the sacred space.

Now, Jake has come full circle. He merges both of the crafts he honed at home with his mom in his show “Living By Design,” where he provides creative and attainable solutions to the everyday design dilemmas of millennial families. Salon recently caught up with Jake, who shared his advice for home chefs and new homeowners — and what it is like to work with Rachel Ray.

Salon: From an early age, a family table was always significant to you. Your mom would build a table for every new home that you moved into. How did that impact your career?

Jake: We never ate a table that my mom didn’t build. She’s known to all her friends and family for making incredible wood furniture. And it started out as we just had no money, and she needed to make furniture out of necessity. But then it turned out that she made it better than the things you could buy, and she just kept doing it. And I became the helper around six years old — just fascinated with seeing all this lumber in the house, and then it turns into a table. It’s really cool, and that really ignited a love for building wood furniture. And now I build beds, and tables and all kinds of stuff. So she definitely has played into my career, and I’ve turned it into a passion. “Living By Design” is just a great vehicle to be able to showcase my love for cooking and building in the same show.

Salon: Do you feel as though sitting at the table and having a family dinner is a lost art form? But is it not an important practice, especially given the times we live in?

Jake: Oh gosh, it’s totally important. We write in our cookbook about how the dining table represents so much in our family. It was the place that you could really get out your voice and be heard. It’s where the kids learned how to debate the older kids, and it’s where we found out we were getting another sibling. It’s where we found out that we were moving across the country. It’s the place — it’s the staple that represents so many conversations, birthday parties, celebrations. And I think it’s definitely a dying art form to sit down with your family and eat a meal that you prepared.

With all the delivery apps, everybody’s on the go. Everybody’s on their phone. It’s not really the same anymore, and I definitely know in my family it’s really, really enforced that when you are eating — you’re concentrating on eating and being present with the people you love. I think that’s super important, because the world is so busy. We’re all so busy, we have careers. If you can really focus on taking that time at the end of the day, it’s very special.

Salon: One of the things we love about you is you are a home chef. Did you also learn how to cook from your mom?

Jake: I did. My mom is from New Orleans, so growing up my mom would always prepare really great food. It was always festive, and every celebration was surrounded around food. So, yes, I definitely learned building and cooking from my mom.

Salon: Learning how to build and cook at an early age with your mom turned out to be the perfect preparation for “Living By Design,” which blends the two crafts. How do you bridge the gap between design and food in the show?

Jake: My sister, Jazz, and I do “Living By Design.” Jazz designs spaces for millennial women, and it’s generally smaller spaces than your average redesign show. And we do everything from studio apartments — to we did a five bedroom house. So it’s really cool — the format of the show — because she’ll design the space, and then I build a custom piece per episode for the space or refurbish. And then I cook the meal, and she makes the dessert. And it’s just a fun way to mix cooking and design in the same show. And for me, it’s a dream to be able to build and cook in the same show.

Salon: You get to do exactly what you like to do.

Jake: Literally. I get to make the table and the dinner on it.

Salon: You work with a millennial audience on “Living By Design.” What advice do you give to first-time home owners who are less-established and don’t have an HGTV budget?

Jake: I would say watch “Living By Design.” (chuckles) No, but for real. Millennials — we don’t have access to all the money. We don’t have like the HGTV $300,000 budget. So these are real, attainable budgets that real, working-class people would be able to afford. We make do with thrifting and stuff like that.

The advice I would give is: Get out there. And go thrift shopping, and online thrifting and all of that. It can save you thousands of dollars. And check out our show and the website — just the little things that are refurbished and made. And you’ll see these things for free on the street or the free section of online thrifting — they always have a free section of things you can just pick up. And you can refurbish a desk with a little bit of paint and a new knob. You have a new situation that you paid next to nothing for. I have furnished my apartments in the past completely on free stuff, so that’s the way to do it really, really cheap if you don’t have the funds.

Salon: What was it like writing your first cookbook? Is it the first of many, do you have another one ahead?

Jake: I’m actually working on my second cookbook right now. The first one was “The Family Table.” I did it with my three siblings, and it’s basically 130 recipes of the food we ate growing up — so real family-style food. There’s a New Orleans-style chapter in there. And it was really fun to make, because it’s like going down memory lane as far as the recipes you remember and what you forgot. And it’s also like having this bible in the family now, as far as generations can have these recipes that are formatted just for them. So it was great.

I mean, I love the cookbook making process. It’s very, very tedious. I probably read the book more than 30 times. And there’s a few recipes in there like pizza crust that have been tested 15 or more times. So just testing the recipes, and knowing the concept of the recipe and testing it a million times to make sure that it’s perfect is like the tedious process of making cookbooks. But I love it.

Salon: Can you share what your next cookbook is about?

Jake: My next one is a pasta cookbook. It’s family-style pastas. It’s going to be 100 recipes. I mean, it’s very different kinds of pastas like southern pastas, fried stuff on it. And it’s going to be a good time.

Salon: Did you learn any pasta tricks from Rachel Ray? One of the perfect things about your pairing is that you both started out as home chefs. What was working together like?

Jake: Amazing. She is the queen of food. Honestly, it was a great, great, great time. I love Rachel, and she makes a killer pasta for sure. I made a few different pastas on her show. One time I showed her the specific way my family makes manicotti. It’s kind of like a tubular noodle, and then you open it up and make it like lasagna. But it’s with pesto and cheese, so it’s like a side little pasta — can of pasta. And then I have my jumbo pasta and all that — so getting the seal of approval from her on different pastas was really awesome.

Salon: What is the difference between a home chef and a trained chef?

Jake: When you’re at home, there’s something about making food for your loved ones that there’s just a little bit more — there’s just a little bit more love in it, you know. It just feels more soulful, and there’s nothing more loving to me than giving someone a plate. And to me, a home chef is like that. It represents moms. It represents families. It represents people that just want to have dinner parties. And there’s nothing you get from cooking for someone other than nourishing them and making them happy. It’s a complete way of giving to people — just cooking for them. 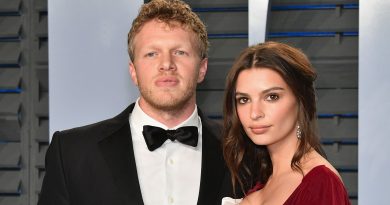 Emily Ratajkowski Is Pregnant With Her First Child