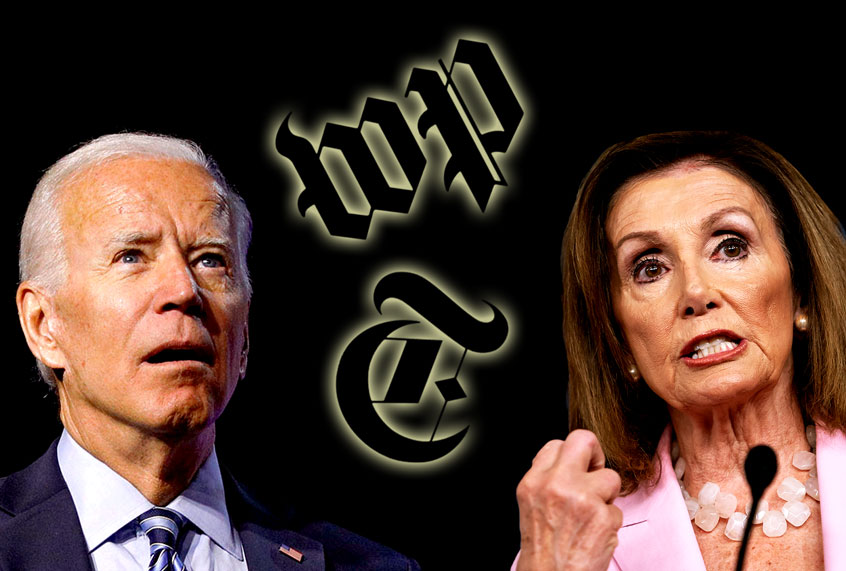 Maybe you can’t blame House Speaker Nancy Pelosi for being dismissive and condescending about impeachment from the moment Democrats took control of the House, and for slow-walking herself into a process she never wanted in the first place — and that she now clearly wants to get over with ASAP.

I don’t actually mean that: Of course you can. Trying to guess what goes on in politicians’ minds is never wise, but I would assume Pelosi is leery of having her historic legacy tarnished by an impeachment that could go sideways in a dozen different ways. She has already made a medium-firm promise that the next Congress will be her last with the speaker’s gavel, presuming Democrats hold the majority. Understandably, she doesn’t want the history books to record that, Welp, this lady was the first to hold the most important legislative position in our nation, and here’s how she screwed it up.

That’s a big and largely unnoticed downside to the fact that the entire congressional Democratic leadership has become a gerontocracy, with every prominent figure pushing 80 except for Rep. Hakeem Jeffries of New York, the caucus chair (and likely speaker-in-waiting). A younger speaker could afford to say: WTF, let’s take a stand on principle for once in our useless lives. If we lose, we’ll be back to fight another day knowing we did the right thing. Pelosi feels she doesn’t have that luxury.

It hardly needs stating that this learned defensiveness, born from years of defeat, abuse, pointless compromise and self-gaslighting, is one of the Democratic Party’s most deep-rooted problems. Or does it? (I wrote a whole column about the Democrats’ Gríma Wormtongue act last weekend, which got me accused of “carrying dirty water for fascists” by one especially eloquent Twitter user.)

It’s also true that Pelosi is almost entirely surrounded by an elite consensus which values stability and order and an entirely mythical realm of “adults in the room” civility and moderation over anything else, in the face of decades of evidence that those things have long since been dispatched to the historical dustbin. I’m often reminded of the semi-apocryphal quote attributed to Malcolm X, when asked by some skinny-tied TV interviewer of the early ‘60s why he did not believe in the universal brotherhood of man: “I do believe in it. But it has come to my attention that not every man wants to be my brother.”

According to this elite consensus — which is equal parts civics-lesson pedantry masquerading as realpolitik and the other way around — impeachment is distasteful and divisive and likely to backfire on whoever deploys it. It’s only to be used in the most extreme circumstances (OK, fair enough) and even then is to be regretted, fretted over and apologized for. It’s a gross violation of decorum and civilized behavior, akin to the proverbial turd in the punch bowl, even if that decorum — and hell, that entire theory of civilization — exists only in the hive-mind of the elite consensus itself.

It would be impossible to list the extensive universe of oh-noes and “both sides agree both sides are awful” coverage found in establishment media over the last few days. Even the Washington Post, which has positioned itself forcefully as a scourge of the Trump White House, has felt compelled to publish accounts of all the legislation that supposedly won’t get done because of impeachment — which was so totally going to happen otherwise — and offered up a set of doleful interviews with right-wing Democrats who remain opposed or wavering, with the actual headline “I wish we waited a little longer.”

One such Democrat who appears in that Post article — and I suspect is among its unnamed sources as well — is Rep. Cheri Bustos, the Illinois moderate and Pelosi loyalist who chairs the Democratic Congressional Campaign Committee. Sit with that for a moment: The person in charge of running the campaign to hold or expand the Democrats’ House majority “has privately counseled fellow Democrats for months to steer clear” of impeachment, urging “measured steps” and “fact-finding missions” instead.

But it’s useless for lesser practitioners of both-sides-ism to compete with the New York Times, which in the Trump era has built a veritable Sistine Chapel of false equivalence, deep concern for a lost Elysium of bipartisan comity and daring expeditions in pursuit of exurban “swing voters,” nearly always conceived as middle-income white people in flyover states.

One such endeavor went south this week after Times reporter Sabrina Tavernise posted a now-deleted tweet describing a Wednesday story under her byline (along with Trip Gabriel and Jack Healy) as interviews with “swing voters” who were “repelled” by impeachment, and suggesting this meant trouble ahead for Democrats. Of the six interview subjects in the article, one was a Trump voter (and 2018 Republican voter) whom the Times has interviewed on several previous occasions, another has attended 23 MAGA rallies and a third was described as living in “Trump country” and has a portrait of Robert E. Lee in his house.

Although the story wasn’t actually framed around “swing voters” — which raises the question of why one of its authors believed that — it was strongly frontloaded toward the view that liberals are apprehensive about impeachment and conservatives entirely dismissive. That was just paving the way, perhaps, for the Pickett’s Charge of cocktail-party lamentation on the op-ed pages led by Frank Bruni and David Brooks, the nominally opposed but substantively interchangeable avatars of Ivy League concern-trolling.

I suppose we must acknowledge that their positions are slightly different, or at least conflicted and inconsistent in non-identical ways. Bruni claims to support impeachment, but regrets it intensely; Brooks agrees that impeachment is warranted, but opposes it. It is the rhetoric, the tone and the overarching, embarrassing “one nation” fantasy — as inhaled among the top tenth of the Northeast Corridor’s privileged classes — that are functionally identical.

Bruni begins by admitting that impeaching Trump is both necessary and unavoidable, “in terms of fidelity to the Constitution and to basic decency.” OK then! But for the next 600 words or so, he outlines any number of reasons why it’s a terrible idea: It might re-elect Trump, he argues (this is the only political hypothesis he entertains), and it might sideline legislation on infrastructure, health care and education. If that part was meant as subtle irony, Frank: Well played! You got me.

Worse yet, Bruni intones, this might result in dividing our nation, and heaven forfend:

A dangerously polarized and often viciously partisan country would grow more so, with people on opposing sides hunkering down deeper in their camps and clinging harder to their chosen narratives as the president — concerned only with himself — ratcheted up his insistence that truth itself was subjective and up for grabs. . . . At a juncture when we so desperately need to rediscover common ground, we’d be widening the fault lines. Bringing the country together afterward would call for more than a talented politician; it would demand a miracle worker.

I’m still waiting for the next bit, which is supposed to be: “I’m Joe Biden, and I approve this message.”

So if Bruni is clearly against impeachment but lacks the courage to say so, David Brooks is being marginally more honest. (I swear, a sentence I never believed I might write.) He literally begins with “Donald Trump committed an impeachable offense,” and then proceeds to tell us all the reasons he shouldn’t be impeached.

Brooks’ arguments are so similar to Bruni’s that the hardest part of writing that column was altering the phrasing to avoid outright plagiarism. And the comedy! These guys kill me. Sure, we get all the gags about how we’d see health care and climate change get fixed if it weren’t for all the petty meanness on both sides. Which would go away, I guess, if Democrats politely agreed to ignore not just Ukraine but every other instance of Trump’s criminality?

Brooks hints that impeachment will further damage “mainstream Republicans,” whoever and wherever they may be, and could bolster the “most bellicose candidates” on the Democratic side. (You get, I guess, two guesses.) But smack in the middle comes the big laugh line: Impeachment is “completely elitist” because it empowers “100 mostly millionaire senators” over the voters:

People will conclude that Democrats are going ahead with impeachment in an election year because they don’t trust the democratic process to yield the right outcome. Democratic elites to voters: We don’t trust you. Too many of you are racists!

Even by the standards of Brooks’ career-long effort to self-manifest as the tribune of the common man, that’s dazzling. For Congress to exercise its constitutional authority over a president he acknowledges is corrupt and criminal is, somehow or other, equivalent to insulting the entire electorate as a basket of deplorables. When, in fact, as responsible adults like David Brooks and the sad-but-wise editorial leadership of the New York Times surely agree, there are very fine people on both sides.