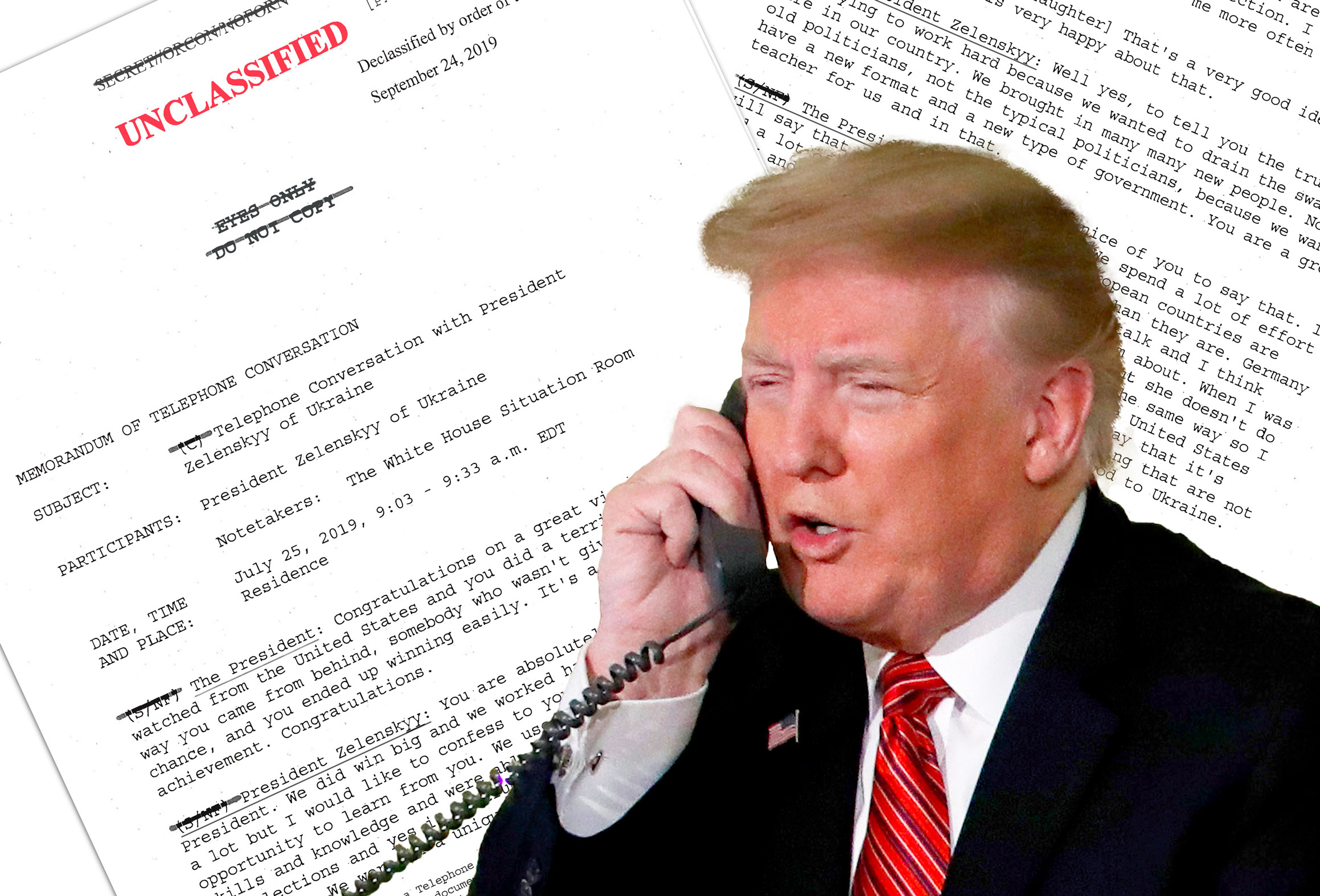 “There’s a lot of talk about Biden’s son — that Biden stopped the prosecution — and a lot of people want to find out about that. So whatever you can do with the attorney general would be great,” Trump told Zelensky in a July 25 call, referring to his attorney general, William Barr. “Biden went around bragging that he stopped the prosecution, so if you can look into it . . . It sounds horrible to me.”

Those statements and others made by Trump in the mid-July call are at the center of accusations that the president pressured Zelensky to dig up dirt on his political rival in order to boost his own 2020 re-election campaign. During the phone call, Trump repeatedly urged Zelensky to work with Barr and his personal lawyer, Rudy Giuliani, who reportedly contacted Ukrainian officials on Trump’s behalf. (Giuliani has claimed that he was instructed by the State Department to connect with Ukraine, a claim which the agency has denied.)

The White House noted the document released Wednesday was not a verbatim transcript of the telephone conversation but represented “the notes and recollections of Situation Room officers and National Security Council policy staff” who listen to official conversations. The White House cautioned “a number of factors can affect the accuracy of the record.”

The call begins with Trump congratulating Zelensky on his election victory, but it quickly veers into the president sprouting a conspiracy theory.

Trump appears to suggest that Hillary Clinton’s private email server, which was hacked by Russian intelligence officials ahead of the 2016 election, is in Ukraine and that former special counsel Robert Mueller’s investigation into Russian interference in the 2016 election started with the Eastern European nation.

“I would you to do us a favor, though, because our country has been through a lot. And Ukraine knows a lot about it,” Trump said after Zelensky raised the prospect of obtaining military equipment from the U.S. “I would like you to find out what happened with this whole situation with Ukraine. They say Crowdstrike . . . I guess you have one of your wealthy people . . . the server. They say Ukraine has it.” (CrowdStrike is the cybersecurity firm that investigated the hack of the Democratic National Committee server in 2016, and concluded Russians were behind the attack.)

Trump’s call with Zelensky came a day after Mueller testified to Congress about his investigation into Russian interference in the 2016 election. During the call, he urged Zelensky to work with Barr to investigate “the server” and derided Mueller’s public congressional testimony as “incompetent.”

Zelensky replied that “my person, my candidate” for the prosecutor job “will look into the situation, specifically to the company that you mentioned in this issue.” He also noted that he stayed at Trump Tower during his last visit to New York.

Trump ordered the transcript of his call with Zelensky to be released amid mounting pressure from Congress and a rising tide of support for impeachment among Democrats on Capitol Hill. Speaker Nancy Pelosi, D-Calif., said Tuesday that she had directed the House of Representatives to initiate an official impeachment inquiry against Trump, after resisting calls to move forward with the move for months.

Trump has publicly acknowledged that he asked Zelensky to investigate Biden’s son, who served on the board of a Ukrainian energy company that came under scrutiny for possible abuse of power and unlawful enrichment. Hunter Biden was not accused of any wrongdoing in the investigation, but anti-corruption advocates expressed concern that he served at the company at the time his father was the Obama administration’s point person on relations with Ukraine.

As vice president, Joe Biden reportedly pressured Ukraine to fire its top prosecutor, Viktor Shokin, who Biden and other Western officials have argued was ignoring corruption in his own office and among the political elite. In 2016, Biden reportedly threatened to withhold $1 billion in loan guarantees unless the nation’s leaders removed Shokin. There is no evidence that Joe Biden misused his authority.

Trump and Giuliani, however, have pointed to the event as a major scandal, even though no evidence has emerged that Biden attempted to help his son by pressing for Shokin’s dismissal.

The July 25 call between Trump and Zelensky has come under mounting scrutiny since it was reported last week that it is at least partly related to a whistleblower complaint that has been withheld from Congress.

The contents of the complaint have remained a secret, even though federal law requires complaints to be forwarded to the intelligence committees in Congress.  In this case, however, acting director of national intelligence, Joseph Maguire, has refused to turn over the complaint after consulting with officials at the Department of Justice. He is set to testify publicly Thursday before the House Intelligence Committee.

The president has denied any improper behavior in regards to his communications with Ukraine. He insisted his July phone call with Zelensky was “a perfect phone call,” even though he admitted he ordered nearly $400 million in military aid for Ukraine to be withheld in the days before the call.

Trump has also denied that the aid freeze was related to alleged attempts to pressure Zelensky to investigate the Biden family. The president claimed that he temporarily blocked the assistance amid concerns that the U.S. was contributing more to Ukraine than other nations were.

“You will see it was a very friendly and totally appropriate call,” Trump tweeted shortly before Pelosi announced an official impeachment inquiry Tuesday. “No pressure and, unlike Joe Biden and his son, NO quid pro quo! This is nothing more than a continuation of the Greatest and most Destructive Witch Hunt of all time!”

Lawmakers have demanded that the White House release not just the transcript of Trump’s call with Zelensky but also the mysterious whistleblower complaint. The administration is reportedly preparing to release a redacted version of the complaint to Congress in the coming days, as well as to allow the whistleblower to speak with congressional investigators.

OUAI Is Entering the Candle Game