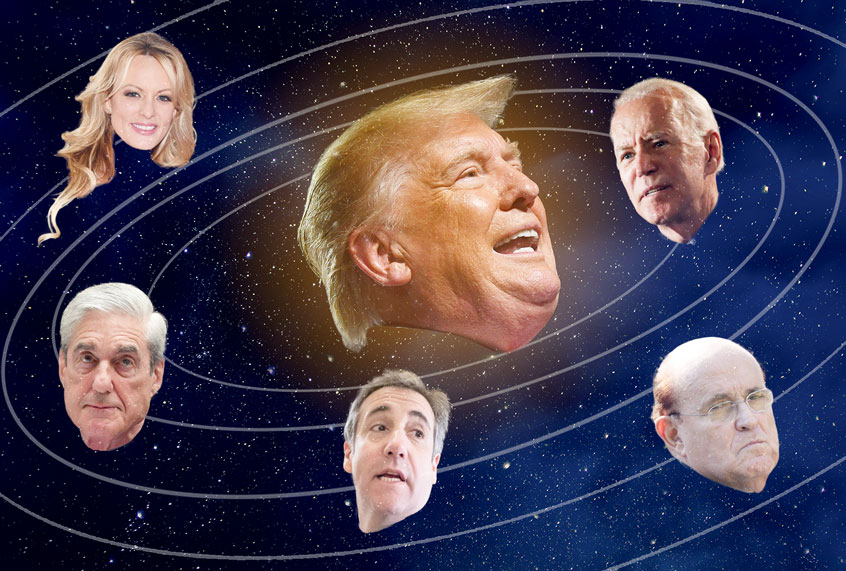 Well, it finally happened. After months of handwringing, the Democrats finally took the step their most committed activists have been clamoring for since November of 2018. House Speaker Nancy Pelosi announced on Tuesday that Congress will launch an official impeachment investigation. As of this writing, 203 Democrats are now on the record in support of an inquiry. On Monday morning, that number stood at  134.

The reason for this change among the leadership, and this avalanche of support among the rank and file, has been the reporting showing that the president and his legal henchman, Rudy Giuliani, have been strong-arming the Ukrainian government to get help in smearing Trump’s potential election opponent, former Vice President Joe Biden. The timeline of events starting last spring strongly suggests that the president went way outside normal procedures and held military aid to Ukraine hostage in hopes that newly-elected President Volodymyr Zelensky would do his bidding.  Giuliani and Trump have made numerous wild TV appearances over the last few days in which they have confessed to many elements of this story.

Pelosi said in her brief address:

The president has admitted to asking the president of Ukraine to take actions which would benefit him politically. … The actions of the Trump presidency revealed a dishonorable fact: The president’s betrayal of his oath of office, betrayal of our national security and betrayal of the integrity of our elections.

The president has agreed to release a transcript of his phone call with Zelensky, in which he is accused of bringing up the Biden issue. And after the Senate unanimously voted to request this, the White House also agreed to follow the law and release some version of the whistleblower account to the intelligence committees in both houses of Congress. There’s no telling whether either of those documents will be trustworthy. The White House has been known to doctor transcripts, and phone calls with foreign leaders apparently are not recorded verbatim in any case. It is also likely that the whistleblower report will be subject to the usual redactions. But it’s a start.

In remarks at a forum sponsored by the Atlantic on Tuesday morning, Pelosi said she believed this blatant abuse of power would be easy for the public to understand, and that there was a new urgency here since this case reveals how the president’s actions imperil the integrity of the upcoming election — the very mechanism by which she had previously insisted would hold Trump accountable.

But that wasn’t the only reason. As Ryan Grim reported at the Intercept, tremendous pressure has been building for months within the Democratic caucus. As is common in a large political coalition, there are turf wars and frictions between the young Turks and the old guard. And some deluded committee chairmen apparently believed they could make deals with Trump on pet legislation, so they were afraid to be too aggressive. But over the August break constituents came out of the woodwork demanding impeachment and members both for and against began to worry that the political price of a failure to hold the president accountable had become too great.

Grim writes that Rep. Jamie Raskin, D-Md., a constitutional attorney and advocate of impeachment on principle, told members in one recent meeting that “the party’s passivity was causing real political pain for rank-and-file members of Congress” and that in order to keep just a small handful of freshman happy, “the entire party was being dragged down and routinely humiliated by Trump’s contempt for the rule of law.” He noted that primary opponents were popping up all over the place, far more than usual, to challenge those who were holding back support for impeachment. According to Grim, even members who weren’t currently facing a primary challenger were looking over their shoulders.

If intensity is important in party politics (and it is), the intensity of the anger and frustration among the Resistance groups and rank-and-file grassroots was already pushing the caucus to the brink when this latest example of Trump’s unpatriotic perfidy was revealed.

I was concerned at first that the party would decide only to pursue this one impeachable incident when it’s vitally important that they look at every aspect of Trump’s abuse of power, obstruction of justice and ongoing corruption and self-dealing. The list is long and somewhat overwhelming, which has probably served  as a perverse form of protection for Trump: Aside from the Mueller investigation, they didn’t seem to know where to start.

There had been talk of naming a select committee on impeachment, but Pelosi has instead decided to task the Intelligence, Ways and Means, Finance, Oversight and Foreign Relations committees with continuing their work and then reporting their findings to the Judiciary Committee, which would actually vote on articles of impeachment. Stonewalling by the White House and the Department of Justice has slowed that down but there’s really no reason why it should take too much time.

After all, we already know that that a special prosecutor found that Trump committed obstruction of justice at least 10 times, and was only spared indictment because of one Department of Justice memo. We also know that the president has adopted a blanket policy of obstructing congressional oversight, which makes similar obstruction during the Nixon administration look like child’s play.

Trump blatantly violated campaign finance laws and watched his accomplice, Michael Cohen, go to jail while he signed hush money checks in the Oval Office. He constantly releases classified information willy-nilly on social media and threatens all critics and responsible law enforcement with firing or imprisonment.

While refusing to divest himself of his businesses, Trump has never adequately revealed the extent of his holdings around the world. What we know about the attempted Trump Tower Moscow deal alone shows that his conflicts of interest are monumental. Trump promotes his commercial properties constantly, systematically funds his businesses with taxpayer dollars and gleefully accepts millions in foreign money in direct violation of the emoluments clauses of the Constitution. His offspring and their spouses are all enmeshed with both politics and the family business to such an extent that it’s impossible to see where one ends and the other begins.

There is a pattern of abuse of power, since Trump obviously believes he can do all this with impunity:

I don’t know what legal genius told him that, but it’s not true — as he may finally be about to find out. All these behaviors must be checked.

Pelosi’s announcement was an important step, and long overdue. Executing the next steps successfully will take more finesse than we’ve seen from the Democrats up until now. Let’s hope that they, unlike the president, are capable of learning from their mistakes.

More Giuliani mystery: He created two unknown companies amid his work for Trump in Ukraine

Who loves America? Inciting a riot to sack the Capitol gives us the answer

Reclaiming “freedom” in the age of coronavirus: Don’t allow Trump and the right to claim it