Adams Oshiomhole, National Chairman of the All Progressives Congress, has denied 2023 presidential election posters showing him as the flag bearer of the party, attributing it to the handiwork of mischief-makers.

SaharaReporters had sighted campaign posters of Oshiomhole, an ex-governor of Edo State, and Nasir El-Rufai, governor of Kaduna State, in Surulere, Lagos State.

This is just as campaign poster of Bola Tinubu, a national leader of the party, as the presidential candidate of the party was seen at Ikeja in the state.

Denying having knowledge of the posters, Oshiomhole said those circulating them were looking for ways to set members of the APC against one another.

Oshiomhole, who spoke through his Chief Press Secretary, Simon Egbebulem, told Punch:  “The posters allegedly in circulation are handiworks of mischief-makers who are hell-bent on circulating materials to cause confusion in the polity.

“They are obviously looking for ways to set members of the ruling against themselves. The supposed posters have no approval of my principal and should be ignored for whatever it is worth. It is the merchants of lies at work as usual and they deserve no attention.” 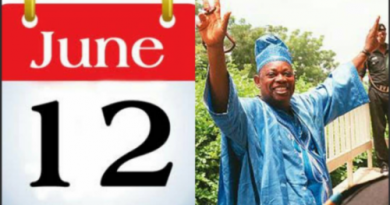 June 12: A Day In The Life Of A Nation By Johnson Amusan