LAGOS, Sept 25 (Reuters) – International aid agency Mercy Corps on Wednesday suspended its operations in two of the northeastern Nigerian states worst hit by Islamist insurgents after the army closed four of its offices in the region, the organisation said in a statement.

A military source and an aid worker at the organisation, both speaking on condition of anonymity, said the army closed the offices on Wednesday after troops said they had found 29 million naira ($94,771) in cash being transported in northeastern Borno state by a driver who said the money belonged to Mercy Corps.

It comes days after the army forced another aid agency, Action Against Hunger, to close its office in the region after accusing it of aiding terrorist groups such as Boko Haram and Islamic State.

Northeast Nigeria has been blighted by a decade-long insurgency led by militant group Boko Haram that has killed 30,000 people and forced two million to flee their homes. The United Nations has said 7.1 million people in the region need assistance in one of the world’s worst humanitarian crises. (Reporting by Alexis Akwagyiram and Maiduguri Newsroom, Editing by William Maclean)

Creating Light Out Of The Darkness: Take It Back Volunteers Create A Library For Community School In Ogun 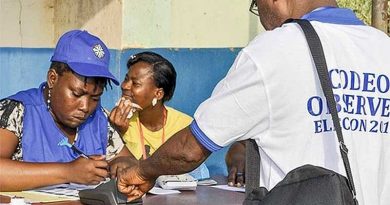