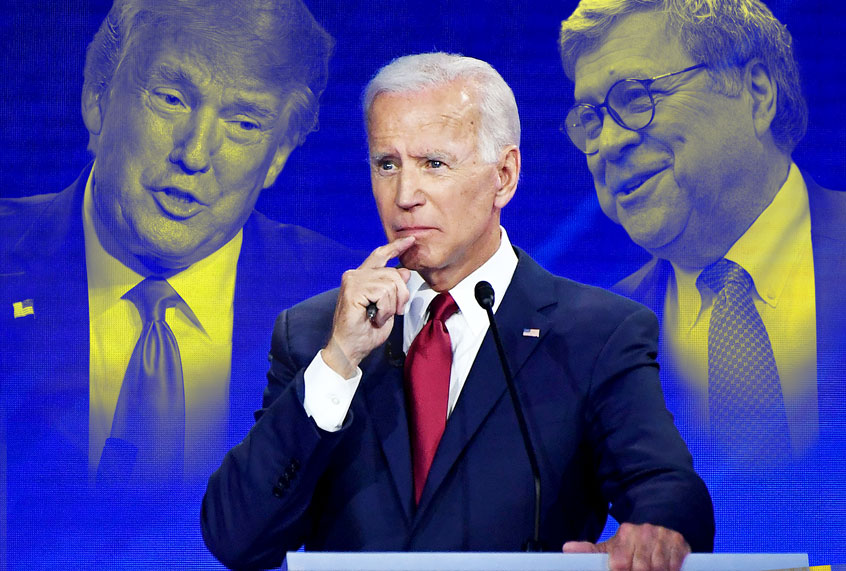 During normal times, Donald Trump’s attempted extortion of the Ukrainian government, aimed at forcing an investigation against one of his chief political opponents would almost immediately become the purview of the attorney general, who would — again, during normal times — appoint a special prosecutor to investigate the allegations. After all, the president attempted to use taxpayer money and the weight of the federal government to force Ukraine’s newly elected president to help Trump’s re-election campaign: This was a flagrant abuse of power, a flagrant attempt at bribery and extortion, and absolutely an indictment- or impeachment-worthy trespass.

Making matters worse, Trump has literally confessed to the charges on several occasions, while staring directly into video cameras, daring the rest of us to finally cuff him.

But these aren’t normal times, nor do we have a normal attorney general.

Attorney General Bill Barr, as we all know by now, isn’t America’s top cop. He’s Trump’s personal fixer — Trump’s personal Tom Hagen (in the visage of Tom Bosley) whose barely four pages of hastily-authored misinformation last March effectively suffocated the Trump-Russia saga in the press, while cloaking Trump in layers and layers of government-issued bubble wrap. As a result of Barr’s “no obstruction, no collusion” propaganda, Trump felt emboldened to collude in plain sight, in cahoots with his befuddled TV lawyer, Rudy Giuliani, in preparation for the 2020 election. And in case anyone believes Joe Biden’s the only candidate in Trump’s crosshairs, there’s a significant chance he has plotted similar schemes against the other leading Democrats. No one is safe from Trump’s malfeasance, and we still have more than 400 days until the election.

In addition to his involvement in making sure the intelligence community whistleblower never talks to Congress, Barr’s role in Trump’s election scam is a prong of the story we haven’t yet fully explored. We should prepare ourselves for Barr to resume his usual role as an irritant to justice, rather than a champion of it.

Back in May when this story first appeared, and while it flew under the radar for the subsequent summer months, we learned that Trump was considering the option of ordering Barr to pick up where Ukrainian prosecutors Viktor Shokin and Yuriy Lutsenko left off. In other words, the White House had a backup plan in place, and this plan-B might still exist.

Giuliani told the Guardian: “I believe the president has the same view that I have — that the attorney general should make this call.”

Likewise, Trump himself told Politico, “Certainly it would be an appropriate thing to speak to [Barr] about, but I have not done that as of yet. … It could be a very big situation.” Politico also observed that Barr shied away from questions about the Ukraine matter during congressional testimony.

The plan requires Barr to act as the fallback prosecutor should Ukraine balk at reopening the long-closed investigation into Burisma Holdings, for which Hunter Biden once served as a director. Speaking of which, in an interview with Bloomberg last May, prosecutor Lutsenko cleared the Bidens of any wrongdoing. The question now is whether Ukraine is ramping up a second investigation after Trump released the $250 million in military aid to Ukraine in recent days. A mysterious additional $140 million was also paid to the government in Kyiv — and for what, exactly?

So far, in the course of this latest round of alarming news, Barr’s office hasn’t issued any statements confirming or denying whether the Justice Department would pursue the debunked Biden-Ukraine non-scandal. Nevertheless, we should be prepared for Barr to shoehorn himself into the proceedings at any moment, especially if the news cycle and congressional pressure begins to close in on Trump.

Don’t forget: Barr is a cult member, having shirked his responsibility to the rule of law by acting as Trump’s rear guard, so to speak. It’s easier now than ever to coerce an already compliant AG into doing Trump’s bidding. The president only needs to ask nicely for Barr to swing into action with a new special counsel investigation. There’s also the possibility that Barr will appoint a friendly face, like Robert Durst prosecutor and Fox News screecher Jeanine Pirro, to investigate the charges against Trump, resulting in a complete kangaroo-court exoneration of the president. And there’s no way Barr will recuse himself from any of this. Ever.

Meanwhile, it appears as though Trump might release a version of the transcripts of his conversation with President Volodymyr Zelensky. This is far from being good news since the point will likely be to manufacture the same outcome as the Barr’s initial memo on the Mueller report. (I wouldn’t rule out the possibility that Barr will issue an exculpatory-ish memo on Ukraine.) Barr’s actions last March slashed the tires of the Mueller report before any of us could shout “cover-up.” We should assume that the White House version of the Zelensky transcript will have the same deflating effect in the news media, since it will absolutely be heavily redacted — you know, for the sake of “national security.” By which I mean “keeping Trump out of prison.”

How do we know the transcript will be edited and redacted? That’s easy. The president said so.

“I didn’t say I’m going to release it at all,” Trump told reporters at the UN on Monday, per Voice of America’s Steve Herman. I love it when Trump accidentally derps the truth. Yet again, Trump always makes things worse for Trump.

We can only hope the whistleblower possesses a thumb drive containing audio files and transcripts, unmolested from the moment the calls were first recorded by NSA and others. Lordy, I hope there are tapes. The side-by-side comparisons between the White House version and the whistleblower version would be … informative.

On top of the myriad other actions in response to Trump’s criminality here, the appropriate congressional committees must subpoena Barr, if for no other reason than to determine what, if anything, he plans to do in the face of the president’s admitted pressure on the Justice Department to act against Biden. Barr also needs to answer for his role in the White House stonewalling of Congress, preventing the House Intelligence Committee from seeing the whistleblower’s evidence and hearing his or her testimony.

Again, in normal times, the attorney general would be deployed to the front lines of any legal actions against the president. But Barr’s footprint is all over this Ukraine mess already, as he and the administration try desperately to compensate for Trump’s electoral weaknesses by hatching these Batman-villain scams to artificially boost his rapidly diminishing shot at a second term.

By now we should all recognize Trump’s trickery. It should be obvious to everyone that he won’t let go of the Biden-Ukraine thing until Election Day — or until Biden’s not the nominee. He’ll also get Barr to pooper-scooper his ham-fisted cover-up along the way, and he might even turn what ought to be an indictment of the president into an indictment of Joe Biden. As I wrote earlier, Barr has been sucked into the Trump cult. The attorney general is a Red Hat, or at least he’s pretending to be one for reasons we may never know. Either way, he’s capable of anything. The aforementioned cult believes, as Trump does, that the president is America, and that helping Trump win re-election is helping America win.

There won’t be an attorney general or a second special counsel to uphold the law this time. The only solution is for us to demand, en masse, that Trump be indicted or ejected from office or both. Removing the president is a rare and immense thing, as it should be, requiring tenacity and sacrifice by the people in order to provide the impetus for congressional action. Screaming on Twitter isn’t enough. It needs to be followed by physical action, and just in time for the election, too. Impeachment or not, there will still be an opportunity next year to rise up against this agent of disruption — this frenetic cheater who’s so desperate to win at any cost that he’s eager to sell out American foreign policy, American national security, American integrity and American values to do it.

The Best Twitter Reactions and Memes for Game of Thrones Season 8, Episode 4

The National Peace Council (NPC) has appealed to all Ghanaian citizens, both home and abroad, to get involved in sustaining