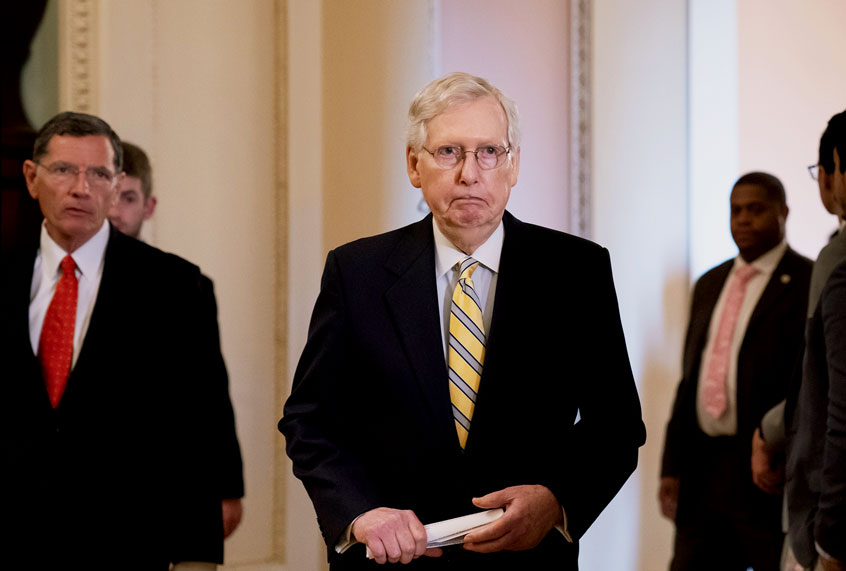 After weeks of being taunted as “Moscow Mitch” for his refusal to consider measures to strengthen election security, Senate Majority Leader Mitch McConnell has backed an amendment that would do just that.

“I am proud to have helped develop this amendment and to co-sponsor it in committee,” McConnell said from the floor of the Senate.

The McConnell-backed appropriations amendment would give states an additional $250 million to improve the quality of their voting systems and strengthen their protections against foreign interference, according to Politico. As a result, the total funding for election security would increase to $600 million after the last fiscal year.

However, McConnell has yet to back the bipartisan election security legislation which Senate Democrats have unsuccessfully attempted to bring to the floor. His efforts to obstruct that legislation earned him the nickname “Moscow Mitch.”

“Senate Democrats believe this new funding is not a substitute for passing the comprehensive bipartisan election security legislation that experts say is desperately needed,” a spokesperson for Senate Minority Leader Chuck Schumer told reporters in an email. (Schumer did praise McConnell’s backing of the appropriations amendment as “a step in the right direction.”)

McConnell has made it abundantly clear that he dislikes the nickname “Moscow Mitch,” telling conservative radio host Hugh Hewitt earlier this month that “it’s modern-day McCarthyism. Unbelievable for a Cold Warrior like me who spent a career standing up to the Russians to be given a moniker like that. It’s an effort to smear me. You know, I can laugh about things like the ‘Grim Reaper,’ but calling me ‘Moscow Mitch’ is over the top.”

Although McConnell has repeatedly referred to the nickname “Moscow Mitch” as a form of “McCarthyism,” the term does not actually refer to accusing someone of being close to Russia. McCarthyism was a tactic pioneered by a 1950s senator, Joseph McCarthy of Wisconsin, to smear anyone who was perceived as too left-wing of being a covert communist. Because the main nation advancing the cause of communism in that era was the Soviet Union, this in turn implied that one could be working for the most powerful nation within that empire.

The intelligence community unanimously agrees that Russian President Vladimir Putin meddled in the 2016 presidential election and in the 2018 midterm elections. The Russian dictator has a long-term geopolitical goal of weakening Western alliances, which have in the past curbed Russian imperialist ambitions in Europe, Asia and elsewhere in the world.

His views were echoed by former Secretary of State Madeleine Albright, who served under former President Bill Clinton, who previously told Salon that Russia is engaged in “asymmetrical warfare, in terms of making sure that our alliances are weakened and that the democratic institutions in those countries are under pressure and threat.”