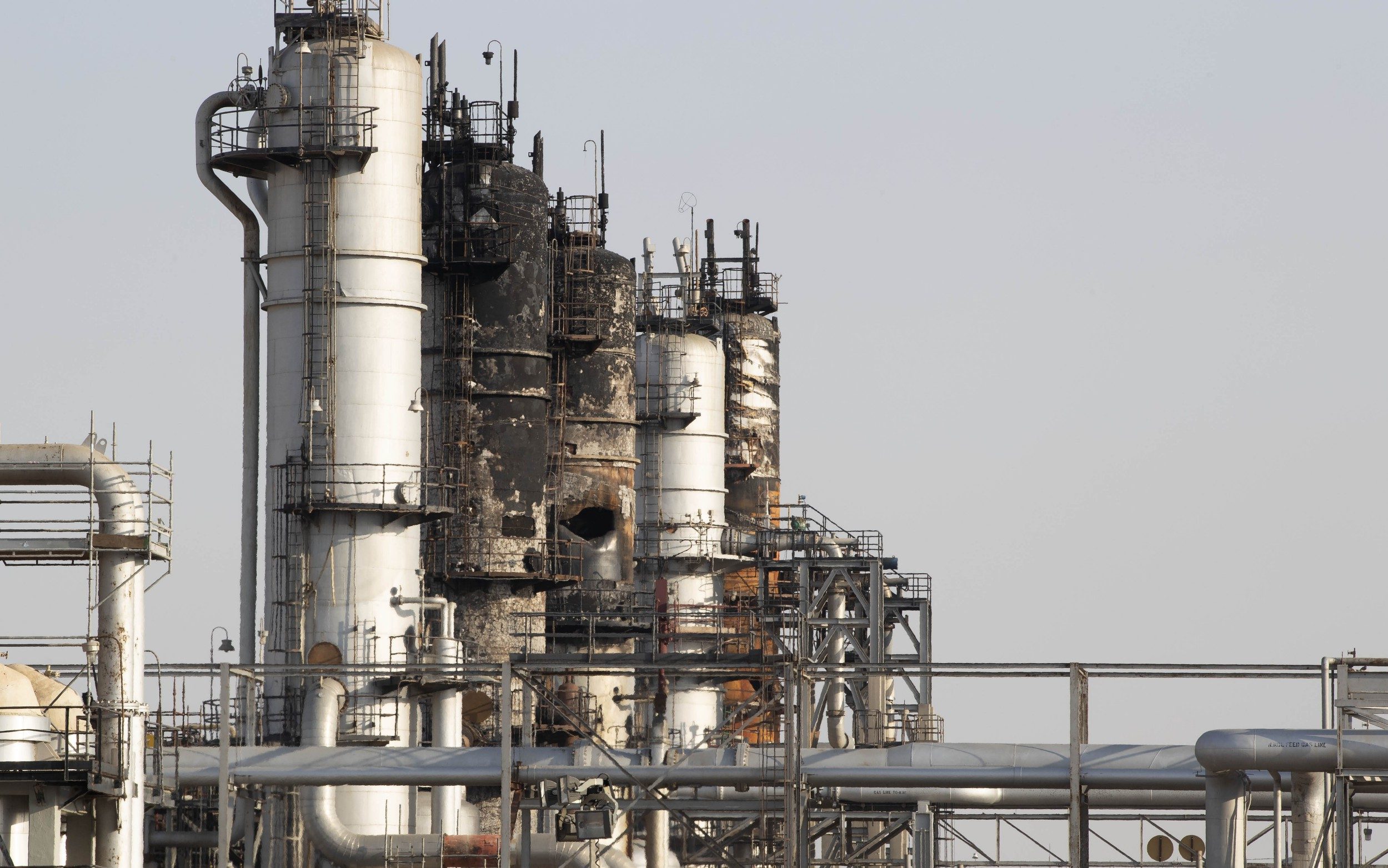 Workers at the Abqaiq Aramco oil plant in eastern Saudi Arabia heard the first missile land just after 3.50am.

The overnight team thought it was an explosion caused by a malfunction – extremely rare but not unheard of at the world’s largest oil processing plant. By strikes two, three, and four, they were in no doubt as to what was happening. This was a deliberate, targeted hit.

They grabbed their gas masks and ran first to the stabilisation columns – one of the most vital parts of the facility – which were on fire.

“The terrorist strikes were still going on when the first team arrived,” said Khaled al-Ghamdi, operations manager at Abqaiq. “The first hour is known as the golden hour and they knew they had to try to get a handle before it burned out of control.”

Some 150 miles away at the exact same moment, a combination of missiles and drones struck a second processing site at Khurais. Saudi Aramco bosses were woken in the middle of the night to be told the news.

By sunrise on Saturday the damage to both plants was clear. Whoever was responsible had managed to cripple the kingdom’s oil production, halving it from more than five million barrels per day to just two overnight. Oil prices rocketed to record highs – higher even than at the start of the Islamic revolution of 1979 and during the Arab-Israeli war oil embargo.

As one official in Riyadh put it to the Telegraph, “such an attack on Saudi’s oil industry is like a knife through its beating heart.”

Saudi Arabia has suffered a number of much smaller-scale and much less consequential attacks in the past few months, almost exclusively at the hands of Iran-backed Houthis which the kingdom is fighting in neighbouring Yemen. The militia did claim the latest strikes – but they were met with widespread scepticism.

Instead, last weekend’s strikes brought the long-running shadow war between Saudi Arabia and Iran out into the open. If US intelligence is to be believed, this was the first major attack by Iran, from Iran, on its foe.

So unexpected was it that Tehran might direct and deliver its own assault, Saudi Arabia’s anti-missile defence system was facing south towards Yemen rather than north towards Iran and Iraq. Tehran is suspected of sending its missiles a circuitous route round the northern Persian Gulf through Iraqi air space, which allowed it to successfully evade sophisticated Saudi radars.

All eyes are now on Saudi Arabia, which cannot leave the attack unanswered but also knows confrontation with Iran must be avoided at all costs.

Saudi Aramco put on a press tour of the two sites on Friday – a rare exercise in transparency for a hermit kingdom not known to open its doors to journalists.

Riyadh is clearly keen to drum up support for any coordinated response against Iran. It has already shared much of its evidence with the US and plans to present it at the United Nations General Assembly in the coming week.

Visiting the ruined sites it was immediately clear the strike had been clearly planned and cleverly executed, a raid far beyond the capabilities of the Houthis.

At Khurais, cranes had been erected around two burnt-out stabilisation columns, which form part of oil-gas separation units.

At Abqaiq, gaping holes were being mended in spherical “three-phase separators”, which perform the crucial function of separating fluids into gas, oil and water.

Parts are being urgently shipped from as far away as the US and Europe.

Experts who looked at the Telegraph’s photographs from the site suggested that the scale of the attack had probably been underplayed.

“The pinpoint precision of the drone strikes is astonishing and the fact that those specific areas were targeted indicates the attackers knew where to strike for maximum effect,” said one former Aramco engineer with knowledge of the plants.

“There are 11 large spheroids, of which it appears at least seven have been struck,” he said. “If all these vessels are disabled completely, operations at Abqaiq would have come to a grinding halt.”

Under its de facto young ruler Crown Prince Mohamed bin Salman, Saudi Arabia has been trying to open up to the world. That Friday’s tour even happened is the clearest sign of that to date.

While MBS  brushed off the brutal murder of dissident journalist Jamal Khashoggi and the mass jailing of women rights activists, his failure to protect the country in the most fundamental way will be an embarrassment of a different magnitude for the proud prince.

Next year Riyadh is hosting the G20 summit. The kingdom will need to instill confidence that it will be able to protect such important visiting delegates from any possible future attack.

“You can see, there is a lot of damage,” said Mr Ghamdi, the manager at Abqaiq, pointing to a scorched stabiliser. “But we have some of the best teams in the world. Within seven hours the fires were extinguished. Within 24 hours we brought production back to 30 per cent.”

Around 1,100 Aramco employees work at the Abqaiq plant on a normal week, but until the company manages to restore normal output – which they estimate to be by the end of the month – they have 6,000 working 24/7.

Any cover up would have seriously eroded trust in Saudi Arabia, not just of its allies but of investors ahead of a much-anticipated international public offering for the state-owned Aramco – billed as the world’s largest ever IPO.

“Yes, the attack happened,” said Mr Ghamdi, “but had it been any other country that would have been it [for the industry]. We must remember that Saudi is strong. The world should know that.”

My Name is Comrade Ehidiamhen Okosodo .I am from Esan North East Local Government Area of Edo State.

I hereby move a motion to nominate Governor Godwin Obaseki to be the next President of the Federal Republic of Nigeria comes 2023.

Bros u try sha but e never reach to be governor

Very sorry madam .....ur husband don join stingy men association .....so watch and see what he can do this year..hahahahahaahhaha

Listen to article As Ghana continue to record cases of the Corona Virus spread, Infinite Research Institute rolled out the