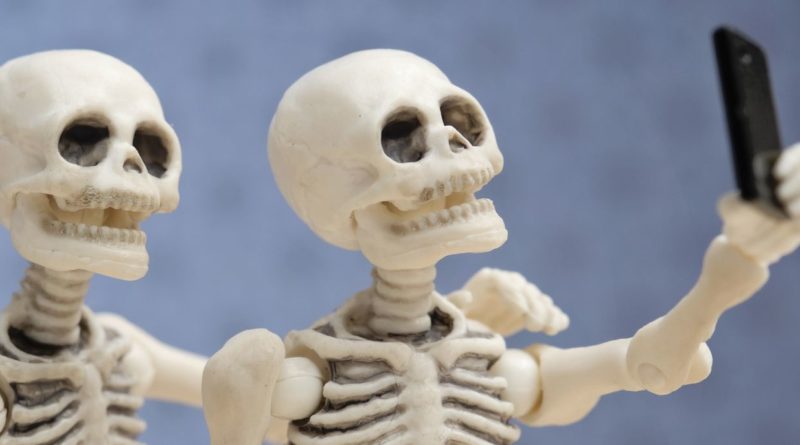 Spooky season is finally upon us, and with it comes pumpkin spice-flavored everything, 31 Nights of Halloween on Freeform, and, of course, costume-planning. Now thanks to TikTok—the Gen-Z video app that popularized “Old Town Road” by Lil Nas X—we also have a new supernatural song to herald in the most holy of haunted #szns.

Halloweenies everywhere should rejoice, because not only is it an objective bop—there’s also an accompanying skeletal boogie-down. Every other video on my TikTok “For You” feed is of someone in skull makeup shuffling à la “Party Rock Anthem” to this song, which is appropriately titled “Spooky Scary Skeleton.”

Originally called “The Skeleton Dance,” it was featured in one of Walt Disney’s 1929 Silly Symphony animated shorts, which was produced by Disney himself and animated by famed special effects technician Ub Iwerks. A video of that version has been viewed over 30 million times on YouTube. In 1996, singer-producer Andrew Gold recorded his own version of the song on his album “Halloween Howls: Fun & Scary Music.”

A techno-remix of Gold’s song is what’s going viral on TikTok right now, but as Paper Mag points out, it was first popularized in YouTube gamer culture.

A TikToker with over 571,000 followers named Maddi Winter has one of the most creative skeleton videos to date, with over 3 million likes. She spent 12 hours producing her version of the shuffle dance, claiming to have “hand-drawn” 350 over the clip of her dancing.

There’s tons of other great ones out there, too. Some even break down, in slow motion, how to do the shuffle. Below are a few favorites.

This is the kind of energy we need for #SpookySzn.

Andrew Yang calls out the NBA for trying to appease China: “Stand up” for free speech rights

State of the Union: Surreal and angry, with way too much Rush Limbaugh

God bless you true man of God. Suleiman is insane and hallucinating. He can only deceive his empty brain followers.

Suleiman say what you know and stop saying what you don't know, that's how you fake pastors cause problems in Nigeria

God Save us All

Who is this man by the way, apostle Johnson suleman make a speech with signify point of real truth of what the problem is in the world. You came up and start lamenting without know sight of point attacking the man of God, please bring out a solid prove before coming out talking rusbish

Thank you so much brother

Is Johnson Suleiman a man of God or a jobman? Let him continue to deceive his gullible followers

You are right sir and may the heavenly father continue to grant you wisdom, and as of Suleiman he his a force prophet a very big deceiving prophet anyway God is going to judge the world with his righteousness.

Let the accused defend himself. Elijah told a world leader Ahab, that he was the trouble of the world. Apostle Johnson Suleman is too big to talk any how. Just wait and see. You contradicted yourself... You said apostle don't need to gather people for prayer before change comes, at d same time u said Pope has gathered people to pray. More sir, before you implicate yourself... Apostle never mentioned name. He only said Pope. I was surprise at first.. After reasoning it I knew papa must have heard and confirmed before saying it online.

Prophet can come from anywhere that's why as a man of God u need d desighment spirit in order to know which one is from God or not.moreover this suleman has made so many prophecies that never came thru in Nigeria,and any prophecy that is meant to bring discord among d people of God is not from God.

Instead of him to do are his own money to help d poor mass and pray for d world,he is there seeking for notice as d man God speaks to.