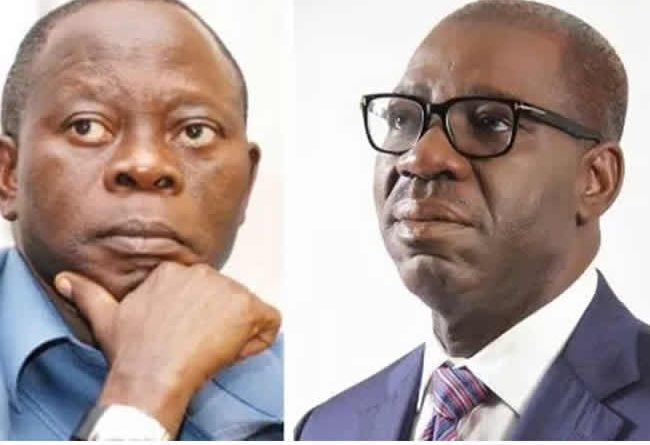 Bishop of the Our Saviour Anglican Church, Friday Imaekhai, on Saturday admonished the National Chairman of the All Progressives Congress, Comrade Adams Oshiomhole, to resolve the feud between him and Governor Godwin Obaseki.

Imaekhai gave the admonition at a thanksgiving service to mark the 90th birthday of the Iyase (Prime Minister) of Benin Kingdom, Chief Sam Igbe.

He charged Oshiomhole to forgive whatever Obaseki might have done to him, for the state to move forward.

He noted that “it is the ground that suffered when two elephants engage in a fight.”

To seal his admonition, Bishop Imaekhai called out Governor Obaseki, Comrade Oshiomhole, Speaker of the State Assembly, Frank Okiye and the Secretary to the State Government, Barr. Osarodion Ogie to the altar and offered prayer on their behalf.

In outward show of compliance with the priest’s admonition, Oshiomhole, Obaseki, Ogie and Okiye embraced and shook hands in the presence of the congregation.

However, while observing protocols at the reception ceremony, Comrade Adams Oshiomhole still did not recognise Frank Okiye as Speaker of the State House of Assembly.

Is this the way? “The Mandalorian” depicts struggling belief more realistically than that last Jedi

About 360 new covid-19 related deaths have been reported in the UK. This brings to total 21,092 coronavirus deaths across